Traveling abroad when pregnant: Part I 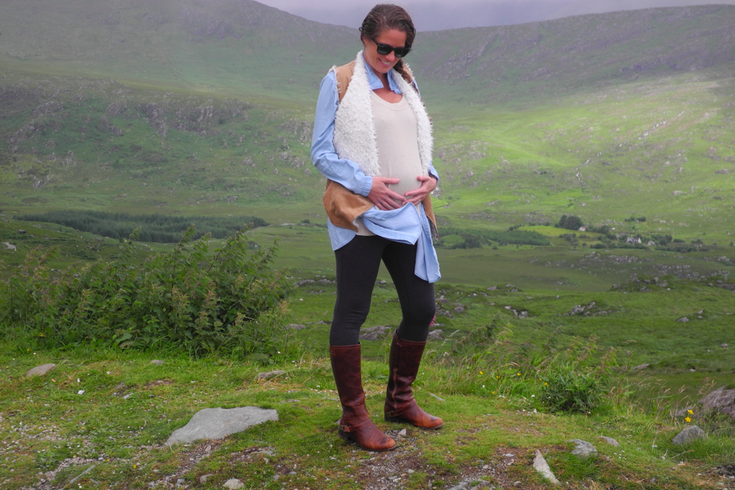 Katie was 28 weeks pregnant with her first child when she traveled to the Emerald Isle for a family trip. She took special precautions to ensure the safety of her baby before the long flight.

My first flight while expecting was just a few days after I took the positive pregnancy tests in January. I was accompanying my husband on a work trip before I was able to visit my OB/GYN, so I researched online some basic do’s and don’ts for flying. Three things were new to me on that first trip: I opted out of the body scanner and metal detector when going through security; I didn’t have a pre-flight cocktail; and I brought a copy of "What to Expect When You’re Expecting" to read on the plane.

I have taken a dozen short, domestic flights since I found out I was pregnant, and I have employed the same strategy as that first trip. But a family vacation in Ireland at the beginning of my third trimester meant I needed to incorporate additional planning and care into my travel.

I discussed the trip to Ireland with my doctor early in my pregnancy to understand if I would be able to go abroad a few months before giving birth. I was desperate to hear that I could travel because I didn’t want to miss out on a special family vacation to a country of our ancestry – something my mother has dreamed of for as long as I can remember. My obstetrician told me that if my pregnancy was going well I would be able to fly up until my 36th week which was a relief because I’d be 28 or 29 weeks for the trip. I was advised that pregnant women have an increased chance of blood clots on long flights, so I would need to wear compression tights, get up and walk around on the plane, and take one low-dose aspirin right before the flight.

About halfway through the flight to Ireland my legs felt so swollen and constricted that I could not wait to rip the tights off once we arrived, even if it meant standing barefoot on a bathroom floor.

I’ve been blessed with a healthy, easy pregnancy but I scheduled an extra appointment with my doctor the day before we left to confirm one last time that I was OK to travel. After hearing the baby’s perfect heartbeat and determining my blood pressure was still normal, my doctor, husband and I were confident that I was ready for the Ireland adventure.

At John F. Kennedy International Airport, I opted out of the body scanner and metal detectors as I always do, explaining to the TSA agent that I was pregnant (as if they couldn’t tell by my baby bump). Most TSA personnel agree with my opting out, but a few have told me that the machines are safe for expecting women. I tell them that I appreciate their advice but explain that I don’t want to take any chances. I usually have to wait for 5 to 10 minutes for a female TSA agent to arrive and do a manual pat down. I’m always offered a private room for the exam, which I decline for the sake of time. The agent puts on a pair of blue gloves and explains the drill: she will touch my entire body, using the back of her hands for the private areas. I’ve done this so many times it’s now normal for a woman I’ve just met to have her hand on my crotch, but it is embarrassing and seems excessive. Of course, it’s part of the current system for keeping the skies safe so I just grin and bear it.

Once we arrived at our gate, I put the compression tights on under my pants in the bathroom, which was way more difficult than it sounds. I didn’t really think through the whole process of getting undressed in a JFK ladies room. It is really hard for me to bend over these days, but there I was in the stall, folded in half and pulling on the tightest pair of leggings I’ve ever known while balancing on my unlaced sneakers so to avoid touching the gross bathroom floor. I am pretty sure my grunts and groans were audible, but it was ultimately better than wearing the compression tights longer than necessary. About halfway through the flight to Ireland my legs felt so swollen and constricted that I could not wait to rip the tights off once we arrived, even if it meant standing barefoot on a bathroom floor. 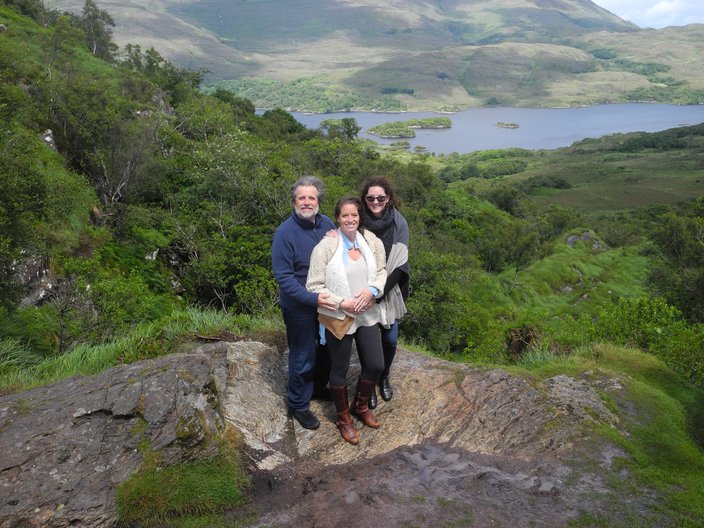 When Katie's parents surprised their family on Christmas morning with a summer vacation in Ireland, they had no idea they would be expecting their first grandchild. The pregnancy made a special trip even more memorable.

We took a red eye to Shannon, which is normally my favorite way to fly international because I can sleep on planes pretty easily. But I had to fight the urge to sleep to ensure I would be up and walking during the six-hour flight. Because it is important for expecting mothers to keep hydrated, I drank a lot of water so I would need to go to the restroom often. I probably would have fallen asleep for most of the flight if I didn’t have to go to the bathroom every hour. I watched a couple of movies, and the flight went by quickly and uneventfully.


My husband and I flew to Ireland a day earlier than everyone else so I would have some extra time to combat jet lag before our touring began. Since I didn’t sleep on the flight, I was really happy to have that first day to recover and rest at the Falls Hotel and Spa in Ennistymon, County Clare. By the time my family arrived the following morning, I was bright-eyed and ready to go!

Next week, I’ll talk about my experience of touring Ireland while pregnant, staying sober while my family delighted in Irish whiskey and beer, and the one morning in Dingle when I had to make an emergency call to my obstetrician.