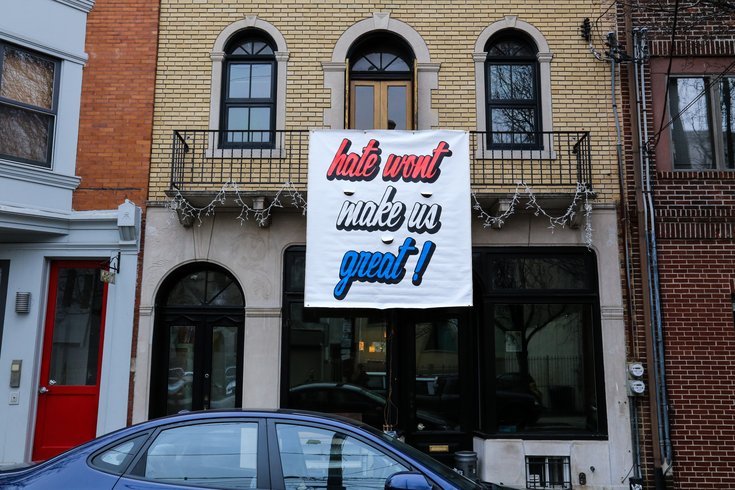 A sign by artist NERO hangs from of a building on Bainbridge Street, between Sixth and Seventh streets in South Philly.

While walking through Philadelphia in the coming days, look up – you might catch a glimpse of what's being called an "unprecedented" artistic effort.

Thirty Philly artists are participating in "Signs of Solidarity" this weekend, a public art protest in response not only to President Donald Trump's inauguration held Friday but "a global shift towards fear and exclusivity."

Organized by StreetDept's Conrad Benner, along with artists Eric Preisendanz and Aubrie Costello and photographer Conor Gray, the idea is for large banners that spread messages of love and inclusivity to hang from public buildings across Philadelphia.

Messages on these banners include "stay positive" and "hate won't make us great."

"We refuse to accept the normalization of divisiveness and the hate it breeds," the event's Facebook page reads."Philadelphia is not only the birthplace of American democracy, but the City of Brotherly Love and Sisterly Affection."

Where each banner hangs along with statements from the artists that can be found have been documents on Benner's blog here. Artists and Instagrammers also are sharing the messages on social media with the hashtag #SignsofSolidarityPHL. Check some of them out below: