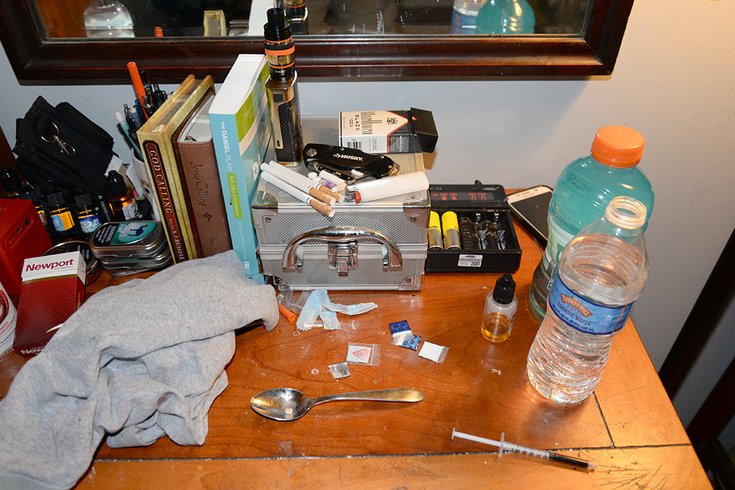 Baggies of heroin and drug paraphernalia sit on a desk in the bedroom of one of the drug counselors at the Freedom Ridge Recovery Lodge. Two on-site counselors overdosed on heroin and fentanyl on Sunday, authorities said.

The on-site counselors were found unresponsive about 2:15 p.m. in separate bedrooms by residents at the Freedom Ridge Recovery Lodge on Freedom Valley Circle in West Brandywine Township, authorities said.

An attempt by residents to revive one of the counselors with a nasal injection of naloxone was unsuccessful. Police and emergency personnel were then summoned, according to Chester County District Attorney Tom Hogan.

Both counselors were pronounced dead at the scene. Police found used needles and heroin baggies near the counselors' bodies in the bedrooms, authorities said. The baggies were stamped with a "Superman" logo and "Danger/Skull & Crossbones" logo. Preliminary toxiology tests on the counselors were positive for heroin and fentanyl.

"If anybody is wondering how bad the opioid epidemic has become, this case is a frightening example," Hogan said in a statement. "The staff members in charge of supervising recovering addicts succumbed to their own addiction and died of opioid overdoses. Opioids are a monster that is slowly consuming our population."

Freedom Ridge, located in a quiet residential area, is a private residence used as a group home or halfway house for people struggling with addiction.

The overdose victims worked and lived at the home as on-site counselors for six men living at the home part of their recovery, officials said. The counselors' duties included establishing daily activities for the residents and keeping medications under lock-and-key.