The event in Horsham will include historical reenactments, live music and authentic food 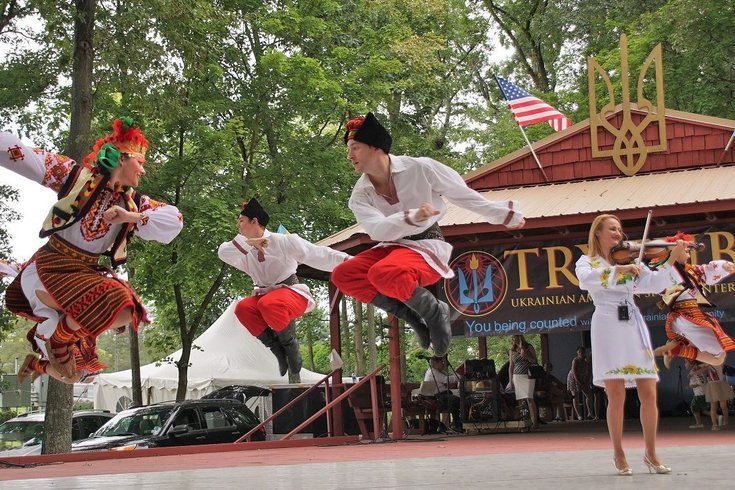 The Ukrainian Folk Festival 2022 will feature authentic music, dance and food from Ukraine. It will be held at the Ukrainian Sport Center on Sunday, Aug. 28.

Ukrainians from across the Philadelphia region will gather for a celebration of their motherland's traditional art, music and dance later this month

The Ukrainian Folk Festival 2022 will be held at the Ukrainian Sport Center, at the corner of County Line and Lower State roads in Horsham, Montgomery County from noon to 8 p.m. on Sunday, Aug. 28.

The festival's roots stretch back more than three decades. It was first held as a celebration of Ukraine's independence from the Soviet Union, which it gained on Aug. 24, 1991.

But this is the first time the festival has happened since 2019 due to the COVID-19 pandemic. A lot has changed in Ukraine since then.

Organizer Euguene Luciw told the Reporter that although this year's event is going to be fun, it will happen through a "veil of tears" due to the Russian invasion.

There will be reenactments of important episodes in Ukrainian history, performances from two Ukrainian folk dance troupes and live music from the likes of Ukrainian pop star Iryna Lonchyna, violinist Innesa Tymochko Dekajlo and Cold Ravine – a folk rock band named after an important site for the Ukrainian independence movement.

Traditional Ukrainian food like vareniki and kowbasa, which are similar to Polish pierogies and kielbasa, will also be available.

Admission costs $15, but $5 from every ticket will be donated to the Ukrainian American Relief Committee, a nonprofit that has been providing assistance to Ukraine since the end of World War II.

"We're going to tell (attendees) about how this attack is genocidal, barbaric, brutal, unjustified and one that is designed to obliterate Ukrainians, take over their land and turn the entire situation into a Russian-owned imperial essence," Luciw told the Reporter.

Since the war began in February, at least 12 million Ukrainian refugees have fled the country while thousands more have stayed behind to fight for their homeland.

But Luciw said the event is more than an opportunity to raise awareness surrounding the conflict – it's a demonstration of how Ukrainians are ethnically, linguistically and culturally distinct from Russia.

This concept is the backbone of modern Ukrainian nationalism and what many of the embattled nation's soldiers are fighting to protect.

After centuries of subjugation to their larger eastern neighbor, first under the Russian Empire and then under the U.S.S.R., the line between Ukrainians and Russians became complex.

Though the Ukrainian people have existed for thousands of years, a modern Ukrainian nation-state wasn't created until 1917.

Over the years, a large number of ethnic Russians settled in eastern parts of Ukraine, where separatist fighters began fighting with Ukrainian forces in 2014 in the wake of Russia's seizure of Crimea. Russian has long been the common language in many parts of the country, including its capital Kiev.

There are many ethnic Ukrainians in Russia, as well.

Ukrainians and Cossacks – a semi-nomadic ethnic group with roots in Ukraine – were an integral part of the Russian Empire's settlement of Siberia and the Far East, a colonial conquest similar to the settlement of the American West.

Today, there are millions of people with Ukrainian heritage scattered across Russia. Very few still speak the language or actively identify as Ukrainian.

To Luciw, simply embracing the nation's distinct culture is a powerful act of defiance against Russian imperialists who would argue that Ukraine is rightfully theirs.

There are 70,000 Ukrainians across the Delaware Valley, the second-most of any region in the U.S. after the New York City area.

The Ukrainian American Sports Center, the organization hosting the event, has roots in Philadelphia that stretch back to 1950. It's also sometimes called "Tryzub," which means "trident" in Ukrainian.

Today, the organization is mainly focused on amateur youth soccer, but it was once a pro club called the Philadelphia Ukrainian Nationals. In the 1960s, it was considered the best team in the country.

"It was a pride for Philadelphia, but also something that the Politburo in the Soviet Union had to read about," Luciw told the Inquirer earlier this year (he's also the team historian). "They were trying to obliterate the Ukrainian national identity, but these darned Philadelphia Ukrainian Nationals were champions of the United States."

The team was the first in the U.S. to have televised home games, which were played at Edison Field on North 29th and Cambria streets in North Philly. The team played friendly matches against international clubs including Manchester United from England and Dundee from Scotland.

The club's performance suffered in the 1970s, but in 1983 it bought the property in Horsham – which has six fields – and began focusing on amateur and youth soccer instead.