Philly has more municipal pools per resident than any other major American city, but only 80% are open this summer due to staffing shortages 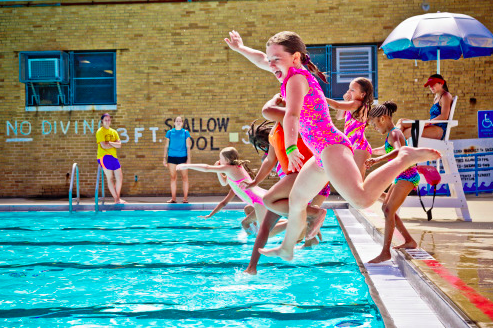 Philadelphia Parks and Recreation is looking to recruit teenagers to serve as future lifeguards at several pop-up pool events this summer.

Philadelphia Parks and Recreation is looking to identify and train teenage lifeguards through pop-up events at pools across the city this summer.

The first one happened Thursday night at the Mill Creek Playground. There are five more scheduled through Aug. 13. The next one occurs at 11 a.m. Saturday at the Cecil B. Moore Recreation Center.

The events, which include free snacks, drinks and giveaways, offer teens ages 13 and older an opportunity to sign up for the lifeguard certification program for free. They also can sign up for free swimming lessons.

Anyone 16 or older who completes the lifeguard certification program can become a lifeguard next summer. The free training is also available to anyone younger than 24. It will happen at Lincoln High School in Mayfair.

Philadelphia has the highest proportion of municipal pools per resident of any major American city, with about one for every 22,000 residents, the Fairmount Water Works reports. But the city has struggled to find lifeguards this year, which is why only 50 of the city's 63 public pools have opened.

"If we get them trained now at 13 or 14, as they age into it, they'll be ready to go," Bill Salvatore, the department's deputy commissioner of programs, told CBS3.

The Fairmount Water Works currently has an exhibit about the history of segregation at public swimming facilities and private swim clubs.

At a press conference highlighting the exhibit, District Attorney Larry Krasner said Philadelphia's pools are an important tool for preventing violence in the city. That's why he'd like to see their hours expanded.

Kirsten Britt, an activist who helped organize a June protest to demand that the city open more of its pools, spoke at the press conference, as well.

"When I was little I used to be able to go (to) my park around the corner and go swimming every single day," she told FOX29. "I feel like my baby should be able to experience the same thing."

Britt would like to see the city expand the swimming hours at its school pools, which are usually indoors and could be kept open to the community around the year.

The lasting legacy of the segregation explored in the Water Works exhibit means Black people are less likely to know how to swim.

Almost 70% of Black kids have little to no swimming ability, compared to about 40% of white kids, the Water Works exhibits notes. Black children are six times more likely to drown in a pool.

This disparity stretches back generations. In 2019, the Nile Swim Club in Yeadon, Delaware County began offering 10 days of free swimming lessons to any resident who signs up for its "No Child Will Drown in Our Town" program.

The Nile was the first Black-owned swim club in the nation when it opened in 1959. It was created because Black residents in Yeadon were excluded from white swim clubs, a status quo that continued until at least the 1980s, the New York Times reported.