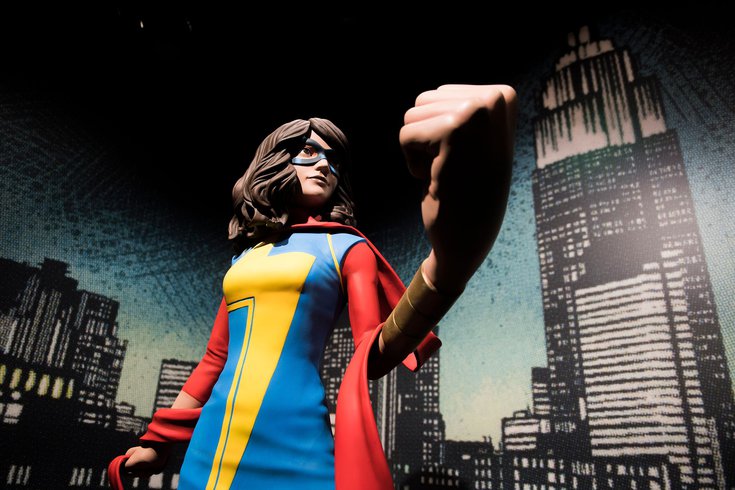 A Ms. Marvel display inside the 'Marvel: Universe of Super Heroes' installation at the Franklin Institute in Philadelphia in 2019.

Read More
NOTE: There are SPOILERS to follow for "Ms. Marvel"

The "Phase Four" of the Marvel Cinematic Universe is getting a lot of negative press and hate from fans. It's not entirely undeserved. "Eternals" was a bore. "Doctor Strange in the Multiverse of Madness" is, without hyperbole, the most disappointed I've ever been after walking out of a movie theater. Disney+ series like "Hawkeye" and "Moon Knight" were enjoyable, but don't seem to be adding much to the wider Marvel storyline in the way everything was meticulously built during the lead up to 2018's "Avengers: Infinity War."

Still, there are highlights there. "Spider-Man: No Way Home," in stark contrast to the "Doctor Strange" sequel, was maybe the most fun I've ever had in a movie theater and is an easy top-five MCU film for me. While the character is a complete unknown to the public with a sketchy comic book history, "Shang-Chi and the Legend of the 10 Rings" was a thrilling ride that had me saying it was "Enter the Dragon" mixed with "Lord of the Rings." I wrote a review last week about digging "Thor: Love and Thunder." Wrapping up with its first season finale on Disney+ this week, I'll chalk "Ms. Marvel" up as a win in this era of MCU entries, too.

Ms. Marvel is Kamla Khan, a Pakistani-American teenage girl from Jersey City who is perhaps even more of an Avengers super fan than the guy writing this review. Struggling to fit into contemporary America as a Muslim with tough-but-loving parents and typical high school problems, Kamala finds escapism in the heroics of Iron Man, Captain Marvel and the like. As the season progresses, Kamala finds a family heirloom, a magical bangle, taking from some aspects of Arabic mythology, that unlocks powers within her. Her power set allows her to "embiggen" and stretch out her body and limbs and then also have crystalline energy manipulation, a new trait that differs from the comics source material.

The same way that "Multiverse of Madness" went for a horror vibe and "Love and Thunder" took the rom-com route, "Ms. Marvel" dabbles in the teen dramedy realm. It's as indebted to "Buffy the Vampire Slayer" and "Scott Pilgrim vs. the World" as much as it is to the character's original comic stories. Incorporating stylized graphics that give those "Scott Pilgrim" vibes and frankly dealing with "normal" teenage problems makes it stand out from the rest of the MCU pack. Detractors may not like stemming from the tradition of just straight up superheroics of the last decade-plus, which explains some of the apathy the MCU is currently grappling with, but I do give some credit for trying new things before the next "big" event takes place (which will likely be a loose adaptation of Jonathan Hickman and Esad Ribic's 2015 "Secret Wars" story down the line).

It feels like Marvel is treading water a bit before the Fantastic Four and X-Men are later incorporated (more on that later), putting out series and films on lesser known characters and experimenting with different vibes. On the surface, "Ms. Marvel" may not seem earth-shattering in the greater MCU picture, but that does nothing to take away the heart of the show. The relationship that develops between Kamala and her parents is uplifting. Not everything needs to be cutting edge and all-out action. I've tried to grow from my younger, cynical ways and enjoy things earnestly. Maybe I can credit that to "Ted Lasso" as a new philosophical approach to fiction, but I can't help but relate to my own relationship with my parents as the walls between Kamala and her parents break down as Ms. Marvel turns into Jersey City's hero.

Kamla's dad Yusuf, portrayed by Mohan Kapur, is a particular high point for me. He's so pure. The way he tries to connect with Kamala before going to an Avengers convention, dressing up in a Pakistani-themed Hulk costume while painting his body green, made me howl with laughter. He just loves his daughter so much and it hurts him to watch her struggle. On the other side of things, Kamla's typical teenage cringe embarrassment at seeing him like that made my feel guilty for the times in my younger years that I may have pushed away my parents when they attempted to get closer to me with my interests. I'm sure I'm not alone in feeling that way while watching the series. It's really hard being 16, right?

I have to commend actress Iman Vellani who plays Kamala, too. As someone who was reading "Ms. Marvel" when the character first got her own comic series in 2014, it was clear from the start that something special was brewing. It's so tough to turn a new character into a household name in superhero comics. Accomplishing that with one from the religious and ethnic background of Kamala makes it even more of a triumph. Vellani perfectly encapsulates the Kamala experience. Pairing that discomfort and clumsiness of high school life with the overt desire to do good, Marvel Studios couldn't have cast the role any better.

Alright ... when I do all these superhero articles, I try to keep them as broad as possible for the majority of the viewing audience. No, these movies and shows aren't made for people like me, nerds with a deep understanding of Marvel Comics history, but with the general public in mind. Still, it would be a waste not to put all that relatively useless information on page for the hardcore fans out there.

The revelation at the episode's end that Kamala's DNA represents a "mutation" set the internet ablaze. Following Disney's acquisition of 21st Century Fox in 2019, Marvel inherited the wide world of X-Men characters, whose film rights were previously sold to Fox decades ago. Marvel created its cinematic universe without being able to utilize the characters and team that had been its comic book bestseller for years. After that deal, Marvel now has all those mutants at its disposal, but it feels like it'll be a slow burn until those big characters are officially introduced in the MCU proper.

Marvel didn't make that "mutation" mention ambiguous. The series plays the theme song of the upcoming "X-Men '97" cartoon that continues the adventures of the iconic "X-Men: The Animated Series" from the '90s as this information is revealed to Kamala. An article from Marvel's website Wednesday doesn't hold back on the subject and makes it seem that this isn't some sort of comic book fake out.

Kamala being the first in-universe mutant shown in the MCU is striking because ... she's never been a mutant in the comics. Not every comic book adaptation needs to be direct call back to the source material and, again, the hardest of hardcore fans certainly aren't the target demographic when it comes to the target audience of these productions. Nevertheless, as a dork with an X-Men tattoo on his forearm, I'm fairly disappointed that this is what the introduction of the X-characters has become. There are hundreds and hundreds of other mutants that could've been put in this situation, both super famous and those unknown to most viewers. With the overall motif that mutants are a "minority" in the Marvel Comics universe (at times it's hackneyed, at times it works well), I'm left wondering why this is how the rollout of the X-Men begins.

Past MCU failures are why Kamala is put in this odd situation. In the 2014 "Ms. Marvel" comic series, Kamala is written to be an Inhuman, an evolutionary form of humanity stemming from the alien race Kree's experiments on humans millennia ago. That's where her powers come from, not something that was unlocked with a magical bangle that activated her X-gene. Marvel made an "Inhumans" TV series on ABC in 2017 that bombed. It lasted just eight episodes before it was scratched and essentially never mentioned again. If that property had succeeded and found a footing like the vast majority of Marvel's properties, it would've been easy to have Kamla as an Inhuman. Due to that show flat-out sucking and quickly being shelved, the average MCU viewer knows nothing about those characters, necessitating a huge change to Kamala's background.

With Marvel's comic division increasingly changing its continuity and history to fit the MCU canon, I can't imagine it's long before readers find out that Kamala has been a mutant, not an Inhuman, all along and will soon find herself popping up in a variety of X-Men books (there are a lot of those in local comic book shops right now!). In the 2014 series that introduced her, Kamala initially thought she may have been a mutant, even teaming up with Wolverine in the process, but it was eventually made known that she's an Inhuman. Perhaps it's an easy switch for Marvel editorial to illustrate that the Inhumans' and mutants' original diagnosis, for lack of a better word, was incorrect.

One of the issues with introducing the mutants and X-Men to the MCU is the awkwardness that they will need to have already existed throughout the films' history though they've never shown up in any conflict, plot line or story. Are you going to say Charles Xavier, out of nowhere, became a telepath in his old age? How do you explain these evolutionary "homo superior" people were on the sideways during all these universe-spanning conflicts? That's not a problem for me to decide (though I'd love the responsibility!), but it may make for some clunky world-building before those classic X-Men tales are played out on screen.

I'm not going to lie, it left a bad taste in my mouth after enjoying the series. Let me see Magneto or Kitty Pryde or Emma Frost instead! I do have to remind myself and other comic book readers, however, that this whole ordeal isn't geared towards pleasing us. If Marvel Studios thinks this is the best way for viewers to engage with the story of a teenage Muslim superhero, so be it. The mutant die has been cast, but the endgame (pun intended) is still years away.