Handing out awards for the instant-classic 'The Batman'

Starring Robert Pattison, Zoë Kravitz, Colin Farrell and Paul Dano, this could be one of the greatest comic book movies of all time 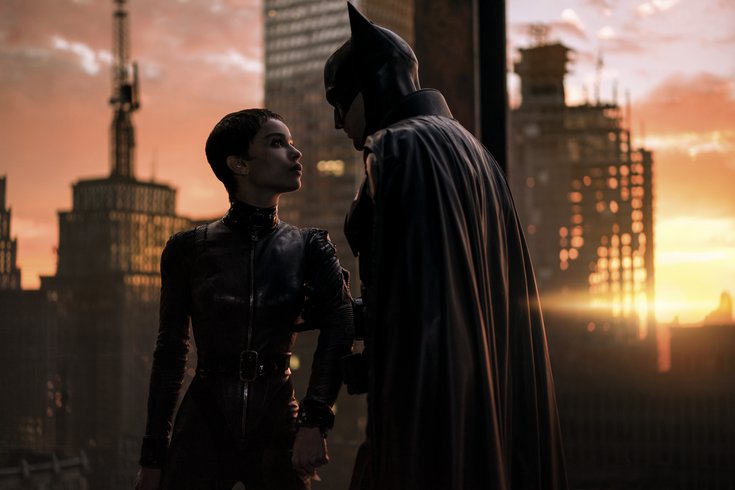 'The Batman' arrives in theaters this weekend. It's the first solo Batman movie in 10 years. Zoe Kravitz, above on left, plays Selina Kyle and Robert Pattinson, right, is Batman.

A new actor is donning the cowl and a new Batman film is hitting theaters. "The Batman," from director Matt Reeves and starring Robert Pattinson, is released this weekend, as the Caped Crusader gets rebooted again with a brand new franchise.

It's been 10 years since audiences were treated to a solo Batman movie. Was "The Batman" worth the wait?

Before I go any further, I want to throw up a spoiler warning. I don't delve much into the plot, but if you're reading this and want to go into the movie completely clean, save this article in your phone's web browser and read it immediately after the credits roll.

I saw the film during an early fan-centric IMAX screening this week. My initial reaction? This is everything a Batman fan could want. It's everything a fan of hard-boiled, 1970s-style noir films could want. "The Batman" stands right beside 2008's "The Dark Knight" as the best big screen adaptation of Gotham City's hero. I try to not be too hyperbolic after one viewing, but if some people make the case that it's even better than "The Dark Knight," I wouldn't hold it against them. If I see "The Batman" again and my initial take holds true, I might even agree.

In lieu of a traditional review of the film, I'm going to hand out six awards for what will likely go down as one of the best comic book movies of all time. 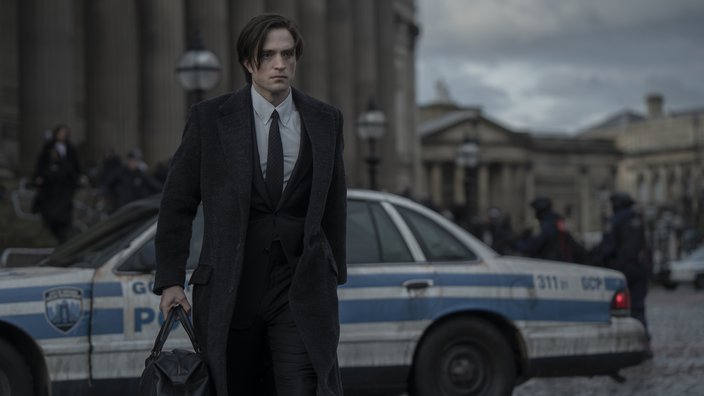 Robert Pattinson is pictured above as Bruce Wayne in the new movie 'The Batman.'

There was some apprehension among the hardcore comic book community when it was announced that Pattinson was going to be playing Bruce Wayne, mostly due to his association with the "Twilight" franchise. Those people were ignoring how Pattinson cut his teeth in the indie scene over the last decade. It reminds me of people being up in arms when heartthrob Heath Ledger was cast as the Joker. To say both castings paid off well is an understatement.

What separates Pattinson from the likes of Michael Keaton, Christian Bale and others is his portrayal of Bruce Wayne. There's a famous monologue in "Kill Bill: Vol. 2" where David Carradine's character Bill talks about how superheroes like Batman and Spider-Man differ from Superman. He goes on to say that Batman is the alter ego of Bruce Wayne, a way for him to carry out his heroic urges while still remaining his true civilian self at heart.

I never liked that. After the trauma of watching his parents die, Bruce became Batman wholly before ever putting on that costume. He spiraled into a near-psychopathic vigilante, hellbent on vengeance and justice. Pattinson's scenes as Bruce showcase him as aloof, a loner, distant and disinterested in building relationships with others. If a guy was going out at night and almost beating people to death while dressed as a bat, it makes all the sense in the world to keep the lowest profile possible when he's not in the Batsuit.

Reeves' script expertly nails that true vision of the Bruce-Batman dichotomy and Pattinson just hits a grand slam with his performance, shifting from vulnerable to enraged to empathetic to sullen. It's also a plus that Pattinson's voice as Batman feels like a natural flow as opposed to the over-the-top tone Bale's Batman takes in his trilogy of Batman films.

Best New Song Added to the Bat Canon Award: 'Something in the Way' by Nirvana

Gone are the glory days where movie soundtracks were a big deal and huge artists would write songs specifically for film. Prince famously recorded the entire soundtrack to 1989's "Batman," and "The Batman Forever" soundtrack had U2's hit "Hold Me, Thrill Me, Kiss Me, Kill Me" and featured Seal's "Kissed from a Rose." Sunny Day Real Estate was even on it! A personal favorite is the Smashing Pumpkins track "The End is the Beginning" from 1997's "Batman & Robin."

A remixed version "Something in the Way" from Nirvana's iconic album "Nevermind" was used during the film's initial trailer, creating an eerie atmosphere that served the pulp-inspired characters so, so well. It appears in the movie too, an embodiment of how Pattinson's Bruce Wayne draws more from the aura of Kurt Cobain than the slick playboy antics previously seen with Keaton and Bale's portrayals.

While Reeves' film obviously pays tribute to '70s crime cinema like "Serpico" and "Mean Streets," the movie I kept coming back to in my head as I watched "The Batman" was David Fincher's "Se7en." Perhaps it's because the pairing of Pattinson's Batman and Jeffrey Wright's Lt. James Gordon feel so reminiscent of Brad Pitt and Morgan Freeman's respective characters in "Se7en" with the elder of the two attempting to prevent the younger one from completely giving in to a seemingly never-ending wave of crime. The serial killer spree that Paul Dano's Riddler goes on certainly can be traced to Se7en's infamous "John Doe." No one's head ends up in a box in this outing though, thankfully.

More than any other Bat film, "The Batman" draws heavily upon specific classic comic book storylines. Jeph Loeb and Tim Sale's seminal 1996 series "Batman: The Long Halloween" is a clear influence, particularly as Gotham City mobsters like Carmine Falcone get more shine here than they ever have previously. The budding relationship between Batman and Gordon is on display in the series, as well. This influence is so evident that at my screening of the movie, people who purchased tickets were given a free copy of the first issue of the series.

"The Batman" picks nuggets from other great Batman tales too, such as Frank Miller and David Mazzucchelli's legendary "Batman: Year One," plus the "Court of Owls" and "Year Zero" storyline from Scott Snyder and Greg Capullo.

Michelle Pfeiffer's performance as Selina Kyle in 1992's "Batman Returns" is held in high regard, but part of me can't get over the whitewashing of the character's background. This mistake was sadly repeated with Anne Hathaway's Catwoman in 2012's "The Dark Knight Rises." Zoë Kravitz's Selina rectifies that blunder and delivers in her own right. Kravitz perfectly encapsulates the antiheroine role that has gradually been more associated with the character while still keeping her gritty, glued-to-the-streets energy and her will-they-or-won't-they relationship with Batman.

Villain That Is Sure to Keep You Up at Night Award: The Riddler 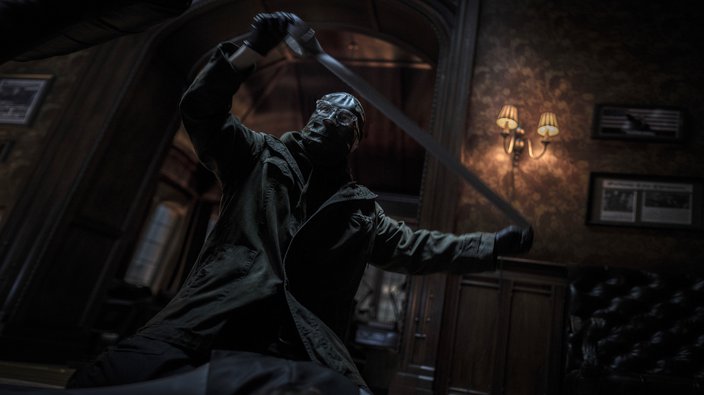 Paul Dano plays the Riddler in 'The Batman.'

Dano's Riddler eschews the outrageous theatrics that Jim Carrey brought out for the character in "Batman Forever." This version of the Riddler is sinister, a murderer leaving clues in the Zodiac Killer mold, while leading Batman on his greatest detective hunt ever seen on screen. Dano's performance will surely draw instant comparisons to Ledger's Joker. They are both eerie. Ledger's Joker is more sinister and abrasive while Dano's Riddler is more so downright terrifying. It's the grounded setting and heightened realism that make the Riddler so scary. Not only does he have a new outfit that feels like a cross between Hush and Scarecrow, but it legitimately feels like a person in this age of technology could pull off the madness that Riddler creates.

Dano, despite routinely receiving critical acclaim for his roles in films like "There Will Be Blood," Prisoners and more, has never been nominated for an Academy Award. Given that Ledger posthumously received an Oscar for his Joker performance, I wouldn't be surprised to see Dano get some legitimate buzz during next year's award season. My awards should rival that of the Oscars, but I don't think Dano himself would feel that way. He can print out this article and hang it above his mantle.

To end on a fun note, here's how I'd rank the best live-action Batman film villains. I'm not including all of them, but these performances that grip me the most.

Recency bias? Maybe! Dano was just that compelling, though. If you've seen the movie, you know that might not be the last fans see of the character too. Here's to waiting for the next thrilling installment in "The Batman" mythos.