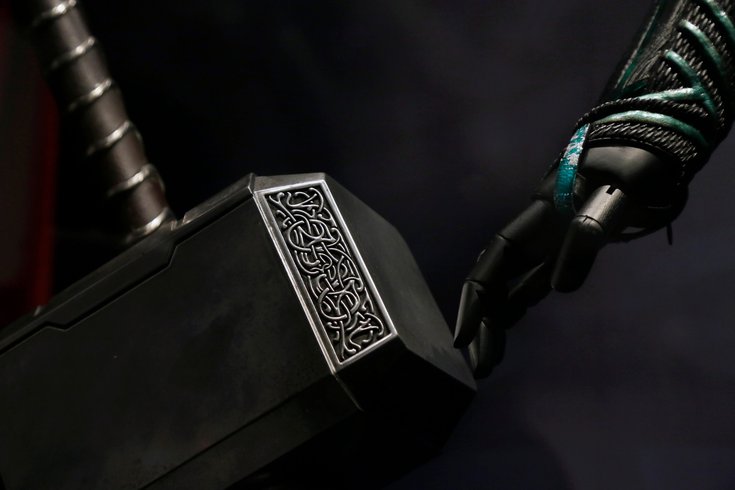 Director Takia Waititi's 'Thor Love and Thunder' brings the laughs in a rom-com package, even if it doesn't hit the heights of 'Thor: Ragnarok.' Above Thor's hammer, Mjolinir, as by wielded by the Marvel Cinematic Universe character in 2012's "The Avengers."

NOTE: There are SPOILERS to follow for "Thor: Love and Thunder."

It's the story of two Thors.

Yes, of course, this weekend's "Thor: Love and Thunder," has two different actors portraying the thunderous superhero, but it's also the story of the character's development in the wider Marvel Cinematic Universe. There's the rigid, traditionally Norse-inspired Thor of his first two solo movies and there's the slapstick, "The Big Lebowski"-inspired Thor audiences have seen since 2017's "Thor Ragnarok." A viewer's mileage on the awkward comedy of director Taika Waititi, who oversaw that transformation, may very, but "Love and Thunder" remains a fun, sci-fi romp that dips into the rom-com realm, even if it doesn't reach the heights of "Ragnarok."

"Love and Thunder" brings Natalie Portman's Jane Foster back to top billing. An on-again, off-again love interest of Thor, Foster is revealed to have have stage 4 cancer. When coming upon the broken pieces of Thor's hammer Mjolnir, the Asgardian's former trusty hammer, Foster transforms into a Thor in her own right: 'The Mighty Thor.' Chosen "worthy" of the mystical weapon, she has the newfound power to wield it while it simultaneously accelerates her cancer. In battle in New Asgard, she runs into Thor, still processing the death of several members of his inner circle and hung up on her post-breakup. It seems that 1,500-year-old god princes and world-renown astrophysicists have cringe fests when interacting in public just like normal folk do!

In an entertainment world where rom-com stories are being relegated to streaming platform series rather than big screen releases, it almost feels weird to see two exes having a cringe fest on screen while not huddled up on my couch. Are those types of films out of theaters because the success of this specific franchise gobbling up the market? Sure, but that's an entirely different discussion. In the mostly male-fronted movies Marvel Studios put out, there has been clunkiness when "love interests" are just underdeveloped female characters relegated to the sidelines. Portman is truly a co-star to Chris Hemsworth and effortlessly bests him for the best on-screen performance. Illustrating that the most famous god in the MCU can embarrass himself in front of the love of his life too, Hemsworth is just charismatic enough to make the inherent silliness of it all click.

The humor doesn't quite as hit as much as it did in "Ragnarok," though. Part of what makes the prior Thor solo outing so notable is that it broke the mold from an archaic version of the character that had increasingly become stale. Thor's refresh was, understandably, fresher the first time around. Reviews had circulated before the film's official release date that it was trying too hard to be a comedy without bringing enough substance. There's merit there in the predictability of incoming jokes when viewers may be itching for the plot to move forward, but that take goes too far for me. It's still fun to see Thor and his best friend Korg go in full "dudes rock" mode even if "Love and Thunder" doesn't meet the "Am I actually watching a Thor movie right now?" absurdity of "Ragnarok."

Ultimately? I still dug it!  Maybe it's more of the kid-at-heart enthusiasm that still remains in me that loves simply going to the movies, but I laughed and drank a Coke Zero and loved my afternoon. The self-aware goofiness of a 1,500-year-old god prince falling head over hammer for a famed astronomer from Earth works way better in Waititi's movie than it would've in lesser hands (or as it likely reads in this article). As someone whose favorite show on TV is the Waititi-produced "What We Do in the Shadows," perhaps that not surprising. If you don't want to see two uber-famous people stumble through conversation in capes and tights this way, I get it, but I'm a sucker for seeing people hit other people with magic hammers while Guns N' Roses' "November Rain" blasts.

Let's hand out a few award for the movie...

Foster's character found herself first possessing the power of Thor in Jason Aaron, Russell Dauterman and Matt Wilson's 2014 "Thor" Marvel comic book series. She became an immediate success in an industry where it's hard for characters not created during the JFK days – and prior – to gain traction. Portman captures the indecision, fear and supreme power of the Mighty Thor just as it was when I first read those comics. While her "death" (no comic book character stays dead) leaves her out of the picture for now, I doubt Marvel fans have seen the last of Portman.

No one can take Gladiator away from him, but Russell Crowe's performance as the Greek god Zeus falls deeper into kitschy territory than I would've liked.

Crowe is doing an intentionally over-the-top Greek accent, but it was so bad that it was distracting and went on for far too long. I felt as if I was listening to someone do an impression of Christopher Walken doing a Greek accent. I lost the plot for a second! That's what I mean by Waititi's uncomfortable brand of humor not necessarily being for everyone. It's weird because it's Russell Crowe, and I think of him as this serious leading man. Not that the guy doesn't have range, but it's just jarring. Matt Damon has a hilariously stupid cameo as an Asgardian thespian, but he's erred towards slapstick way more often than Crowe. It looks as if Crowe's Zeus will be a main villain in a future Thor film, so this certainly won't be the last of him.

Thor's two alien buddies bring laughs in the "these two zany guys" trope. Since is introduction in "Ragnarok," Korg remains my favorite of the minor background characters in the MCU.

MIA Award: Guardians of the Galaxy 🚀

Gorr the God Butcher, created by Aaron and Esad Ribic in the 2012 "Thor: God of Thunder" comic series, is a homicidal villain who wants to murder every god in existence. For a film I'm talking about being such a rom-com, it did have some horror moments when Gorr, played by Christian Bale, terrorized a group of Asgardian children. The movie makes Gorr out to be a bit of tragic figure in the end and it's fine, but he was a downright ruthless being in the pages of some of the best Thor comics ever. I didn't need a sobfest about him, just to know that he rejected higher beings after his own world's civilization collapsed and he got a giant sword with the power to kill gods. I'm talking about one of the best new comic book villains of the 21st century here!

Brett Goldstein, known for his role as Roy Kent in "Ted Lasso," was featured in a post-credit scene as Hercules, the son of Zeus. That got a lot of yelps out the crowd at the theater (myself included), and he will likely be one of the central characters in the next Thor movie.