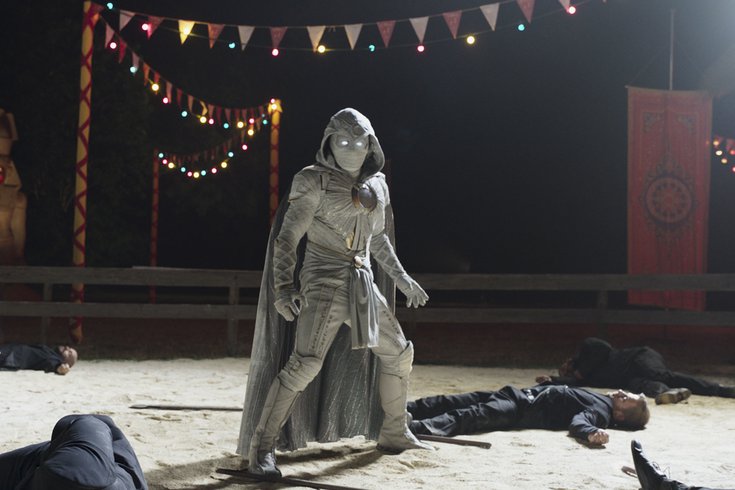 Marvel Studios' Moon Knight premiered on Disney+ on Wednesday. The show's central character, played by Oscar Isaac, is a hero with dissociative identity disorder. In Episode 1, viewers are introduced to two of the lead character's personality states, Steven Grant and Marc Spector.

The Marvel Cinematic Universe template that's spanned 14 years (How has it been 14 years?) has its detractors. Perhaps, especially when these Disney productions showcase a new character, it can be a bit formulaic. Heroes are introduced with the basis that they will further the never-ending plot, the connectivity that makes this fictional world so engrossing, rather than having a true character study.

Enter "Moon Knight," the latest Marvel Studios show to hit Disney+. As someone who spent his youth gobbling up any Marvel comics he could, it's mind-blowing that we've gotten to the point where a C-list character has a staring role in the most prominent entertainment franchise out there. Here we are though with capital M, capital S, Movie Star Oscar Isaac in titular role.

While only the first episode of the six-episode series was released on Wednesday, "Moon Knight" illustrates that it's more than capable of bucking the traditional Marvel formula and delivering something, at least on the surface level, that stands on its own and not bogged down by the continuity of the 27 movies that came before it.

What sits at the heart of the show is Moon Knight's battle with dissociative identity disorder – also know as DID. While that's a quite a delicate plot device to anchor the season, Marvel Studios does so deftly, a huge credit to Isaac himself. "Batman with DID" would be an oversimplification of the hero, but with the way Moon Knight's tale intertwines with that of Khonsu, the Egyptian god of the moon, "Moon Knight" is no Dark Knight and that's a positive thing. DC Comics' Batman wears a dark costume because he wants to hide from his enemies in the shadows. Moon Knight wears white because he wants his enemies to know he's coming. Head-on action is sure to come in the series' next five episodes.

To kick things off, viewers are introduced to Steven Grant, the first personality state Isaac's character inhibits. Grant is a mild-mannered, British, museum gift-shop attendant and works as a point-of-view character. Along with the audience, Grant slowly learns about the chaos that other personality state Marc Spector, the one who acts out as the Moon Knight character, creates. He quickly experiences memory gaps that leave a trail of blood and knocked out bodies around him. The Grant personality state, confused by the chaos surrounding him, works as viewers quickly attempt to keep up with the intentionally fuzzy plot.

The series is a bit more bloody than what has been seen previously in the MCU. This isn't to say it's some textbook R-rated horror flick, but illustrates another divergence for Marvel Studios. It's intriguing to see how Marvel incorporates more adult content when these shows are being hosted on the family-friendly Disney+. Previous Marvel shows that aired on Netflix, such as "Daredevil" and "Jessica Jones," were added to Disney+ this month, prompting the entertainment monolith to add more parental controls for mature content. They certainly should for those series, which feature tons of violence and explicit sex scenes. That's a bit different than what kids see with Ant-Man and Spider-Man!

I wonder if those additions to the streaming service mean that viewers will see more adult-oriented content with these Marvel properties going forward. "Moon Knight" can be a figure operating in that space, putting together a mix of the supernatural and street-level superheroics. With a Blade movie starring Academy Award-winner Mahershala Ali on the way, in addition to possible new Daredevil and Deadpool projects, Marvel may be starting to test the limits of how much they can get away with when it comes to hyper-violence at the House of Mouse. Here's to hoping "Moon Knight" can open those floodgates and continuing producing something rarely seen previously with Marvel IP.

"Moon Knight" ultimately sets the stage for a unique MCU work that should stand well on its own amongst its peers. With future episodes likely delving into Egyptian mythology and shining a greater light on Ethan Hawke's cult leader character, "Moon Knight" has the ability to continue offering a distinct series that is more than welcomed in the crowded superhero space.