The actor struck the comedian in the face during Sunday night's Oscars after a joke about Jada Pinkett Smith's hairstyle ... and then Questlove won for 'Summer of Soul' 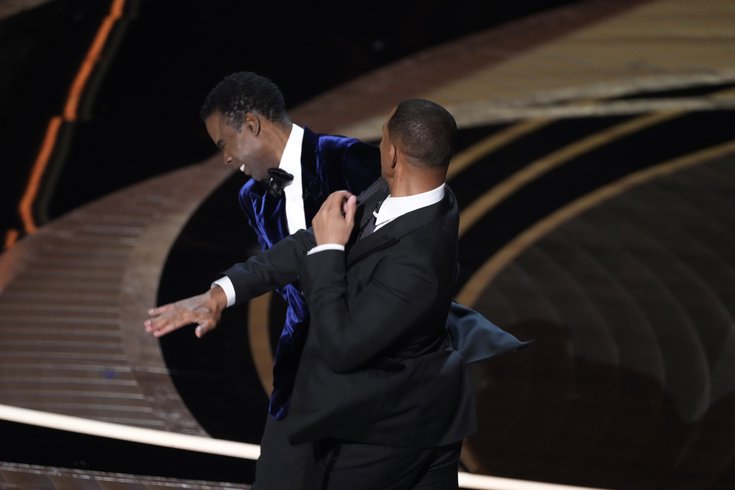 Will Smith strikes Chris Rock in the face during Sunday night's Academy Awards ceremony after the comedian cracked a joke about Smith's wife, Jada Pinkett Smith.

Will Smith finally won the first Oscar of his critically-acclaimed career for his performance in "King Richard."

But it was the actor's stunning on-stage confrontation and explicit verbal exchange with comedian Chris Rock that had viewers buzzing after Sunday night's 94th Academy Awards ceremony.

Rock came on stage to present the award for best feature documentary, which was given to Ahmir "Questlove" Thompson's "Summer of Soul." But before handing out the award, Rock decided to get in a few jokes — one of which was aimed at Jada Pinkett Smith's shaved head.

Pinkett Smith, who is married to Will Smith, revealed in 2018 that she had been diagnosed with alopecia, a health condition that causes hair loss. Since then, the actress has spoken openly about her condition and embraced the experience.

Rock cracked a joke that Pinkett Smith would star in a "G.I. Jane" sequel because of her bald head. Demi Moore's character in the original "G.I. Jane" film from 1997 had her head completely shaved.

Pinkett Smith, seated next to her husband at the front of the stage, was not pleased with the joke. She could be seen rolling her eyes as Rock and other audience members awkwardly laughed. The barb did not come across as a joke to Smith either.

Rock then prepared to move on when the camera cut to Smith getting up from his chair and walking onto the stage. The comedian and others in the crowd began to nervously laugh, wondering what Smith was going to do.

Smith then stunningly smacked Rock in the face before turning around and walking back to his seat.

At first, it seemed like a comedic bit between two men. But it was anything but that.

For those who were watching the ceremony live on TV, the audio was censored for about 20 seconds. Viewers, however, could see Smith angrily yelling at Rock. The audio returned to a speechless Rock and a silent Dolby Theatre in Hollywood, California.

"That was the greatest night in the history of television," Rock said before moving on.

(Warning: The video below contains violence.)

Tense moments at this year's #Oscars as Will Smith confronted Chris Rock on stage live on tv, following a joke that mocked a medical condition of his wife, Jada Pinkett Smith.https://t.co/EViXaQY1NZ pic.twitter.com/cmG3abSiRW

"Will Smith just smacked the sh*t out of me," Rock said.

"Keep my wife's name out your f***ing mouth!," Smith screamed back at Rock from his seat.

(Warning: The video below contains violence and explicit language.)

VIA JAPANESE TELEVISION: The uncensored exchange between Will Smith and Chris Rock pic.twitter.com/j0Z184ZyXa

After the incident, Smith could be seen being calmed down by actors Denzel Washington, Tyler Perry and Montgomery County native Bradley Cooper.

Moments later, Smith was awarded best actor for his portrayal of Richard Williams in "King Richard." He used his acceptance speech to apologize to the Academy of Motion Picture Arts and Sciences and his fellow Oscar nominees, but did not specifically mention Rock.

The Philadelphia native revealed in his speech that Washington told him that "at your highest moment, be careful, because that's when the devil comes for you."

Smith also poked some fun at himself, saying that "art imitates life" and that he was acting like "the crazy father just like they said about Richard Williams."

Smith concluded his speech by saying he hopes the Academy invites him back to future ceremonies.

The Academy said in a statement that it "does not condone violence of any form."

Smith's Oscar victory is, in many ways, a coronation of his three-decade acting career. His performance in "King Richard" will go down as his most-decorated movie role, earning Smith the honor that eluded him twice before in his career.

Other best actor nominees were Benedict Cumberbatch for "The Power of the Dog," Denzel Washington for "The Tragedy of Macbeth," Andrew Garfield for "Tick, Tick ... Boom!" and Javier Bardem for "Being the Ricardos."

"King Richard" tells the story of Serena and Venus Williams' father, who trained both from a young age and served as a driving force for their success in professional tennis. The two women have collectively won 30 Grand Slam titles. The film is now available to stream on HBO Max.

Smith also served as a producer on the film, which earned six Oscar nominations. Its only win came in the best actor category.

The Roots drummer's directorial debut with "Summer of Soul" earned him the first Oscar of his career, winning best feature documentary.

"Summer of Soul" details the musical, historical and societal impact of the 1969 Harlem Cultural Festival through archived footage and interviews with performers and attendees.

One of the event's producers filmed over 40 hours of footage from the summer series. Most of it never saw the light of day due to a lack of interest in the festival. It sat in boxes inside the producer's basement for 50 years – until Questlove was tapped to direct the documentary.

The film swept the Critics Choice Documentary Awards in November, winning all six honors it which it was nominated, including best documentary and best director. "Summer of Soul" also won best documentary at this year's AAFCA and BAFTA Awards.

Former President Barack Obama named "Summer of Soul" one of his favorite films of 2021. The documentary has been nominated for best music film at next Sunday's Grammy Awards

"Summer of Soul" is now available to stream on Hulu and Disney+.

Best picture honors went to "CODA." Jane Campion won best director for "The Power of the Dog." Jessica Chastain received best actress for "The Eyes of Tammy Faye." The most awards of the night went to "Dune" with six.

A complete list of this year's winners can be found on the Academy's website. The 2022 Academy Awards were co-hosted by actresses Regina Hall, Amy Schumer and Wanda Sykes.