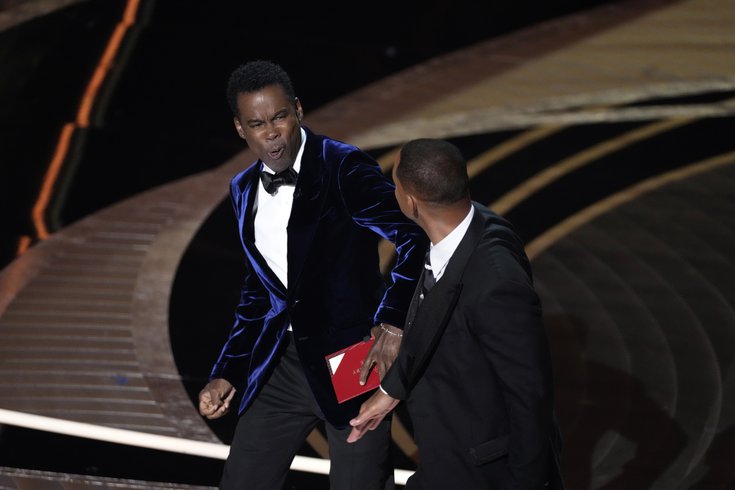 The late night show hosts had plenty to say Monday about Will Smith and Chris Rock's stunning on-stage altercation at Sunday's Oscars ceremony.

Fallout from Will Smith and Chris Rock's shocking on-stage altercation at the Oscars ceremony continued Monday, with the actor issuing an apology to the comedian in the wake of the Academy of Motion Picture Arts and Sciences opening an investigation into the incident.

Smith took to Instagram on Monday night to apologize to Rock for smacking him in the face, calling his behavior "unacceptable" and "inexcusable."

"Jokes at my expense are a part of the job, but a joke about Jada (Pinkett Smith's) medical condition was too much for me to bear and I reacted emotionally," Smith wrote, referencing his wife.

"I was out of line and I was wrong. I am embarrassed and my actions were not indicative of the man I want to be. There is no place for violence in a world of love and kindness."

Smith also doubled down on his previous apology to the Academy, his fellow Oscar nominees, the cast and crew of "King Richard" and the Williams family. He initially apologized Sunday during his acceptance speech for winning best actor.

"I deeply regret that my behavior has stained what has been an otherwise gorgeous journey for all of us," Smith wrote.

The Philadelphia native concluded his statement by writing that he is "a work in progress."

The Academy issued a statement condemning Smith's attack on Rock and announcing a probe into the matter.

"We have officially started a formal review around the incident and will explore further action and consequences in accordance with our bylaws, standards of conduct and California law," the organization said in a statement to the New York Times.

Kimmel dedicated almost his entire opening monologue on "Jimmy Kimmel Live" to the altercation, and he didn't hold back in his assessment of what transpired.

The host joked that Smith's "Hitch slap" of Rock was so shocking that the only thing Kimmel could compare it to was when Mike Tyson infamously bit off part of Evander Holyfield's ear during the heavyweight boxing championship in 1997.

"Even Kanye (West) was like, 'You went on stage and did what at an awards show?'" Kimmel said, referencing the time the rapper interrupted Taylor Swift's acceptance speech at the 2009 MTV Video Music Awards.

"This was the Hollywood version of your drunk uncle starting a fight, ruining the wedding and standing up and giving a long toast to the bride and groom," Kimmel continued.

Kimmel also quipped that none of the actors in attendance who have portrayed superheroes did anything to stop Smith.

"Spider Man was there, Aquaman was there, Catwoman. All sitting on their hands, no one helped Chris Rock," Kimmel said.

Kimmel joked that he was now part of the second-craziest Academy Awards ceremony of all-time. He hosted the Oscars in 2017 when "La La Land" was mistakenly announced as the winner for best picture. The real winner was "Moonlight."

Kimmel also gave Rock credit for holding his own against Smith, saying that if he'd been in the same situation, he would've ran off immediately upon seeing Smith get up from his seat.

Smith striking Rock and then returning moments later to accept best actor in a leading role for "King Richard" was equivalent to "storming out of the house after breaking up with your girlfriend, then coming back in because you forgot your keys," Kimmel said.

Kimmel also took a swing at both the length and substance of Smith's acceptance speech. He joked that Smith's speech was so long because "(Smith) would've beat the crap out of everybody in the band" had they played him off the stage.

Kimmel also joked that it was the first time in Oscars history that someone apologized to the Academy before thanking the Academy.

"'I'd like to apologize to everyone except the guy I slapped in the face,' is really what the speech was," Kimmel said.

Kimmel quipped that Smith ended his speech by saying he hopes the Academy welcomes him back "and if they don't, he'll be waiting for them in the parking lot."

He also proposed that the incident should be put to rest through a roast of Smith hosted by Rock on Comedy Central.

"I hope they at least get together and have a 'Red Table Talk' or something because it's a bummer," Kimmel said. "These are all very kind people."

On "The Late Late Show," Corden addressed the conflict, saying it "threw me off in a huge way." He said he expected Judi Dench to smack Woody Harrelson during Sunday night's awards show.

Corden, like Kimmel, also took a shot at Smith's message in his speech.

"During his acceptance speech, Will Smith said he wants to be a vessel of love. And everyone in the room was like, 'I'll settle for a vessel of chill the f*** out,'" Corden said.

Corden also joked that Smith was awarded a WWE Smackdown title belt at the Oscars.

The sketch started with Corden and his writers talking about some of the notable things that took place at this year's Oscars — except for Smith and Rock's confrontation.

"You saw what happened," Corden said. "We have to talk about something else. We don't talk about Jada. No, no, no." Corden and the other writers then broke into song.

Colbert opened "The Late Show" by saying that it was Monday for everyone except Rock because "I'm pretty sure he got slapped into next week."

The host also quipped that Smith's attack wasn't the worst thing to happen in the actor's career.

Instead of hitting Rock, Smith should have "challenged (Rock) to a duel, or if you really want to hurt a comedian, don't laugh," Colbert said.

"(Not laughing) hurts way more than a punch I promise you," Colbert said.

"Chris just shakes it off with one step," Colbert said. "Will Smith trained for months to play Muhammad Ali. (Smith) has a hand like a flank steak. If Will wanted to hit somebody, he should've picked on somebody more appropriate like Jason Momoa or Liza Minnelli."

Lastly, Colbert took aim at how Smith was permitted to stay at Sunday night's ceremony as if nothing happened.

"But of course, this is Hollywood and there are rules," Colbert said. "You can't just storm a stage, physically assault someone on camera and then go back to your seat. There have to be consequences, like winning the Oscar for best actor and receiving a standing ovation and then partying all night. Who says Hollywood sends a bad message to our kids?"

Fallon addressed the matter on "The Tonight Show," but he didn't initially mention Smith or Rock by name.

"America may be divided, but it was kind of nice for all of us to come together and say 'holy crap' at the same time," Fallon said.

Instead, Fallon turned the moment into a celebration for Questlove, who won best feature documentary for "Summer of Soul" just moments after Rock was slapped by Smith. Questlove and The Roots have been Fallon's in-house band on "The Tonight Show" since 2014.

Fallon joked that the Oscars "went from (designer) Oscar de la Renta to (boxer) Oscar De La Hoya" in a matter of seconds.

"Do you guys remember a few years ago when the Oscars literally announced the wrong winner for best picture? Turns out that was child's play," Fallon said.

Fallon also joked that "you know it was a strange awards show when it ends with a statement from the LAPD." Los Angeles police said Rock declined to press charges against Smith.

Moments later, sitting at his desk, Fallon briefly mentioned Smith and Rock by name and said that the altercation left him "bummed and disturbed."

Meyers made light of the altercation during "Late Night" by making a joke incorporating the song "We Don't Talk About Bruno."

Show writer Amber Ruffin recapped the awards show in her "Late Night" segment, performing a dramatic retelling of how she felt after Smith slapped Rock. She jokingly said that "life as we know it changed forever."