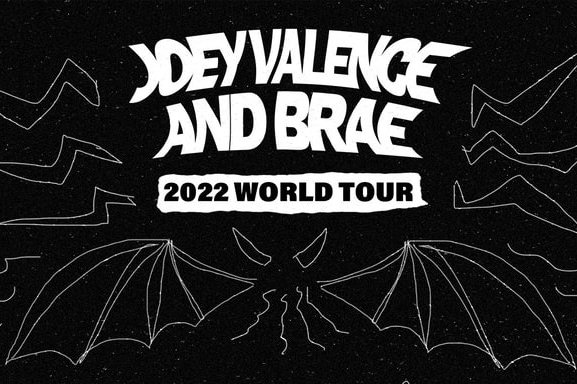 Pennsylvania rappers Joey Valence and Brae have made a name for themselves on TikTok with old school hip-hop flows and beats that sound straight out of the 1980s.

Two rappers from Pennsylvania have made a name for themselves on TikTok with old school hip-hop flows and beats that sound like they came straight out of the 1980s.

However, Joey Valence and Brae weren't even born when their primary influences – acts like the Beastie Boys, Heavy D and Biz Markie – were popularizing rap with mainstream audiences.

​​"To me, the most attractive part … of 80s and early 90s hip-hop was always the genuine and authentic fun surrounding the music," Valence told AAA Backstage earlier this year.

This is something the rapper and producer feels is missing from most modern music, which is why he wanted to bring the old school flair back – but not without the fresh perspective of a 21st century digital native.

The duo is playing an all ages show at the Foundry, 29 E. Allen St., at 8 p.m. on Saturday, July 23. Tickets are available for between $16 and $18 through Live Nation. They are also playing at the Firefly Festival in Dover on Thursday, Sept. 22.

Joey Bertolino and Braedan Lugue, as the rappers are known offstage, are both recent Penn State graduates with roots in Centre County. They met during their freshman year, became roommates and have been making music together ever since.

Although they never intended for their music to be anything more than a creative outlet, last year Valence uploaded one of their early songs "Crank It Up" to TikTok, where it became an immediate hit.

Following their success on the social media platform, Valence entered the song into a talent show and won $10,000 which he used to kickstart the duo's career.

Earlier this year, they got the chance to perform their biggest hit "Double Jump" on the "Ellen DeGeneres Show" after Valence's mother submitted the music video.

Although a clip of the song garnered the duo more than 18 million views on TikTok, a big part of the their appeal is that they still sound like two college roommates making tracks for fun in their dorm room.

Their lyrical content and music videos are modest, funny and free of the self-aggrandizing imagery that's central to most modern rap.

"We’re not taking ourselves too seriously. What you see is what you get, especially when it comes to the glitz and glamor side of things," Brae told NME. "You’ll never see us pulling up in a Bugatti with stacks of cash in our music videos."

But that doesn't mean they're amateurs.

The duo's flows are precise and catchy, and the beats Valence produces sound authentically nostalgic – even though they're crafted using a computer program called FL Studios.

Valence manages this even though he has to be much more careful about sampling than his predecessors were. The production technique central to most 1980s and 1990s hip-hop is rarely used in mainstream songs today due to the copyright lawsuits it spawned.

The duo's old school interests stretch far beyond the realm of hip-hop. Since he was in high school, Valence has been producing drum and bass music, an electronic genre pioneered in the 1990s, with a focus on fast-paced funk samples. That's why his beats sound so refined, even though he's just in his early 20s.

Both of the rappers are also big gamers and many of their tracks – including "Double Jump" – are laden with references to old school titles like "Super Mario" and "Mortal Kombat."