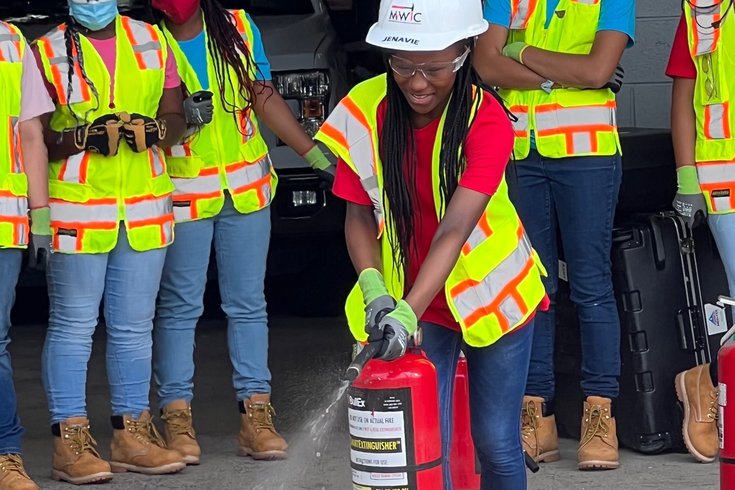 Philadelphia girls entering seventh through 12th grade have been attending a construction summer camp called MyWIC, which provides them with real-world experience, mentorship and education about opportunities that exist in the typically male-dominated construction industry.

This summer, girls entering seventh through 12th grade in the Philadelphia region have been attending a free in-person construction camp called MyWIC, which provides real-world experience, mentorship and education about opportunities that exist in the typically male-dominated construction industry.

The camp meets two or three days each week now through August 10 at trade locations throughout the city. Each day, campers learn about a specialty within the trades.

According to the MyWIC website, the camp introduces the girls to a variety of women role models, including tradeswomen, engineers, architects, project managers, superintendents, lawyers, business owners and administrative support.

The campers are also provided with a supportive, nurturing environment as they develop basic skills in carpentry, electricity, painting, taping, glazing and pipefitting. The camp offers a safe, gender neutral environment to practice these new skills without fear of being teased or isolated.

This is the 13th year the MyWIC camp is being offered; it originally began as a spring break camp offered by NAWIC Philadelphia in 2009.

According to the NAWIC's website, the association was founded in 1953 in Fort Worth, Texas, by 16 women working in the construction industry. They started NAWIC as a support network for women working in a male-dominated field, and today there are more than 115 NAWIC chapters across the country.

With this in mind, the mission of MyWIC is to show young girls that a career in construction can be fun and financially rewarding, and instill the confidence they need to step into the industry. Following camp, the girls are even introduced to apprenticeship programs and scholarship opportunities.

"We are thrilled to see the lasting impact of the MyWIC camp, as many of our girls have gone on to successful careers in the trades and construction over the last 13 years," Mary Gaffney, NAWIC Philadelphia Foundation president, said in a press release. "By the end of the camp each summer, we see a tangible increase in the girls' self-confidence, self-esteem and their overall self-image."