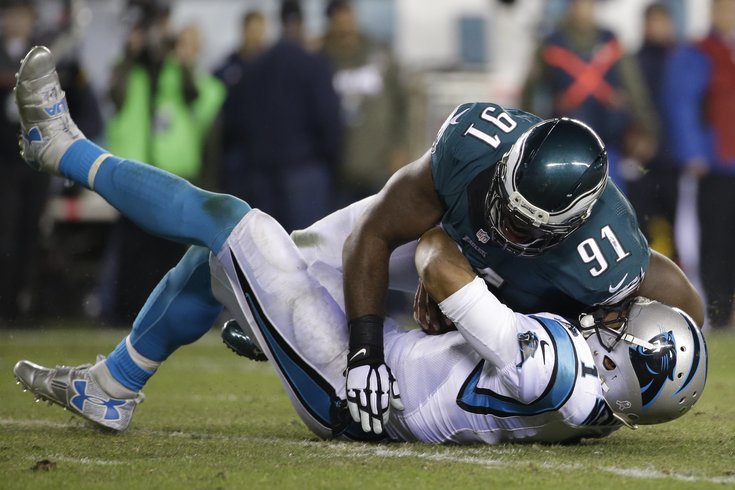 Fletcher Cox is one of the quietest star players in the NFL.

First and foremost on defense, the Eagles want to stop the run, and in 2014 they allowed just 3.7 yards per carry, which was good for fifth-best in the NFL. The Eagles' success against the run a year ago carried over into the first preseason game.

The biggest reason the Eagles have been able to stop the run so effectively? Because of the selflessness of the defensive line.

Two-gapping, if you're unfamiliar, is a style of play in which the defensive linemen engage with the blockers in front of them, and are responsible for the gaps on both sides of their individual opponents. By contrast, one-gapping defensive linemen do not have dual-gap responsibility and are able to try to be disruptive by penetrating through one gap. The latter style leads to more sacks and Pro Bowls, while two-gappers are doing the dirty work so the linebackers behind them are freed up to make plays.

"We do a good job and take a lot of pride in making sure we're holding up the blockers for [the linebackers] to run free to do what they have to do," said NT Bennie Logan.

The Eagles' starting three of Fletcher Cox, Bennie Logan and Cedric Thornton form one of the best defensive lines in the NFL, but they are not recognized as such nationally. For example, Sports Illustrated ranked their 10 best defensive lines, and the Eagles did not make the cut. Maybe it's because that trio had just five sacks between them a year ago, or maybe it's because none of them run their mouths. The star of the group, Cox, is as quiet as they come.

"That group as a whole is very consistent in terms of their production on a day‑in‑and‑day‑out basis, and it's just kind of something you can always count on, is that our D‑line right now, barring any type of injury, is in pretty good shape," Kelly said.

"Fletcher doesn't do too much talking," said Logan. "He just goes out and works. He just shows up every time he's on the field. It's just dominance. We don't really have to talk about the things we're capable of doing. We just go out there and prepare. That's most important thing about us. We just have fun with what we do. We don't really look for the hype. Me personally, I think he's one of the best in the league at what he's doing, but he doesn't really go out and brag and boast about it. If you play hard and just dominate, people start talking for you."

Meanwhile, Thornton has become an outstanding run defender, and Logan is emerging as one of the better nose tackles in the NFL. Against the Colts, Logan was tremendous, per Tommy Lawlor of IgglesBlitz.com.

Bennie Logan – If you had never seen the Eagles play, you would think #96 was the best player on defense. He controlled the middle of the line and made it darn near impossible for the Colts to run the ball. Logan was credited with three tackles, but that doesn’t come close to telling the story of how well he played.

The best part is that the Eagles aren't just very talented along their defensive line. They are also deep, and very young.

"Ced and Fletch are the older guys in the group," said Kelly. "Bennie is just going into year three. That group as a whole is very consistent in terms of their production on a day‑in‑and‑day‑out basis, and it's just kind of something you can always count on, is that our D‑line right now, barring any type of injury, is in pretty good shape."

So how young are they? A month ago, we took inventory of the Eagles' age along their defensive front seven, comparing it with the rest of the NFL. Of the NFL's 224 projected starting front seven players, here is where the Eagles' defensive linemen rank, age-wise:

Being young is nice, if you have good players. But if your players aren't good, being young is not very useful. The 2012 Eagles, for example, were the second youngest team in the NFL to start the season. That team got Andy Reid fired. However, when you have a mix of youth, talent and depth at a positional group, you can really begin to grow something special, and that is what the Eagles are doing along their defensive line.