Several Eagles rookies, including Agholor and Rowe, shine in win over Colts 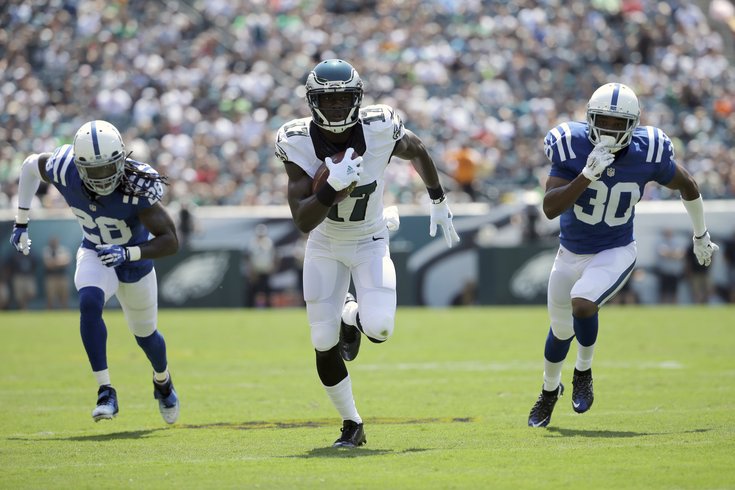 Eagles rookie WR Nelson Agholor sprints towards the end zone for his first NFL touchdown, which came on the same play as his first NFL reception.

For it only being the first preseason game, there's plenty to parse following the Eagles' 36-10 win over the Colts. But that's what happens on a team with major offseason turnover.

With so many roster battles far from being settled, the best person to assess the team's performance is the man who recently assumed final say over any roster decisions, head coach Chip Kelly. And needless to say, he was happy with what he saw from his team, especially the rookies.

Sunday was the first chance for the coaches to see these guys in live game action, and several of them made a great first impression on Kelly.

Here's his overall assessment of how the rookies played:

"The one thing you don't know about any of those guys is what are they going to be like until you get them into a game and that's the encouraging thing. Sometimes the guys stand out in practice. That's been history and all of a sudden you get in the game and they are not the same player, and then other guys that were not so good standing out in practice, stand out in the game.

"Before getting a chance to look at the film, some of those guys, I thought, really stepped up and made some plays. Eric Rowe had a big fumble caused on one of those receptions on the crossing route, came in from behind and did a great job of stripping him. Nelson [Agholor] made a big catch on their bench and turned it into a touchdown and then had another catch.

"We are excited about those guys. It's just one step for us, but we feel like we've got a lot of really good film to teach off of with officials, legitimate down and distance, all those things; a lot of good situations that we can get in the meeting room with those guys when they come back on Tuesday and really start to grow this team."

First-round pick Nelson Agholor -- Kelly later referred to him as a "dynamic player" -- scored a touchdown even though the pass from Mark Sanchez was pretty terrible (he had a few of those today).

It was the first catch of his young career, and the explosiveness after the catch was impressive to say the least.

Agholor has played well so far at training camp, and after today's performance -- three catches, 51 yards and a touchdown -- fans are starting to realize what Kelly seemed to know all along: he may be the real deal.

"The one thing with Nelson is when he gets the ball in his hands, he's real explosive," Kelly said. "So you're anticipating run after the catch with him. That's one of the things we knew about him because you can see it when you watched him play in college. He did that a ton in college."

But this isn't college. Still, the wideout from USC didn't feel any nerves prior to his first NFL game.

“It’s always business," Agholor said. "This was a great opportunity for a lot of us. We are in preseason right now. You learn from the good and bad plays that you make. That is what it is still about. We are still in progression mode. Come game time, you have to capitalize on all the opportunities.

"Right now, it’s all about getting better.”

Despite his strong showing, there are things to be worked on before the next preseason game -- Saturday against the Ravens. There was a pair dropped passes on third down, and after the game, Agholor said he wishes he could have them back.

“I absolutely would have loved to get back two 3rd down situations," he said. "One of them was an in crossing route. It’s considered a basic route and I felt like I could have come back to the ball a bit stronger. Then there was one on the sideline. I need to work on just finding the ball and not looking who is throwing the ball. I think my eyes went to the quarterback. At the end of the day, I like the fact that that happened today.

"It’s a good thing to learn from. I look at my timing, because sometimes when I look back to the quarterback, I can see both. But, different things happened today that were good.”

On the defensive side of the ball, rookie cornerback Eric Rowe looked just as promising as his offensive counterpart.

The second-round pick out of Utah finished the game tied for second-most tackles on the team (3), including one for a loss. He also forced a fumble, stripping Colts wide receiver Phillip Dorsett for the turnover -- one of four turnovers created by the Eagles defense.

Former Ute Eric Rowe forces a fumble in the Eagles preseason game against the Colts https://t.co/o9BrLTuXZX

Of course, it should be noted that Rowe was beaten badly in coverage prior to stripping Dorsett, but it was still a great recovery by the rookie.

Later in the game, the corner was again involved in a Colts fumble. Although the credit for the forced fumble went to safety Chris Maragos, it looked like Rowe may have already began to pry the ball loose before Maragos came flying in expedited that process.

But it didn't stop there.

Even undrafted rookie -- and Roxborough High product -- WR Rasheed Bailey, who finished with two catches (on two targets) for 23 yards, made an impression on his coach. And it was just as much about his play as it was about how he handled the moment.

"He's been really good," Kelly said. "That's the one thing about Rasheed, he's got outstanding hands. He may not be as fast as some of those other guys, but I think he's a really good route runner."

Kelly went on to praise Bailey's composure while debuting in front of his hometown crowd. Here's the full quote:

"You talk about the jump that he made coming from Roxborough High School and playing at DelVal [Delaware Valley University], and then all of a sudden he's playing in the Linc against the Indianapolis Colts. That's a pretty big jump for anybody.

"I was anxious to see what his response would be. If there was any kid or any player on our team that could be a little starry eyed, it would have been him, but he wasn't. He was out there, it was all about business, wanted to make plays and made a nice catch on our sideline on a key out route and then that catch he made coming down on the seam ball from Timmy. I thought Tim put it in the only place he could put it, because it was pretty good coverage, but for him to come up with it was a big time catch on his part."

He still has a long way to go to make the roster, but after one game, the Philly native has only helped his chances.

So for those of you stressed out because guys like Sam Bradford and DeMarco Murray were held out, take solace in the fact that the guys who were out there -- specifically the rookies -- played very well on Sunday.

Then again, it's only the preseason...

Colts fans, the Eagles' backups are better than yours. Not sure that matters. But that's what we're seeing.