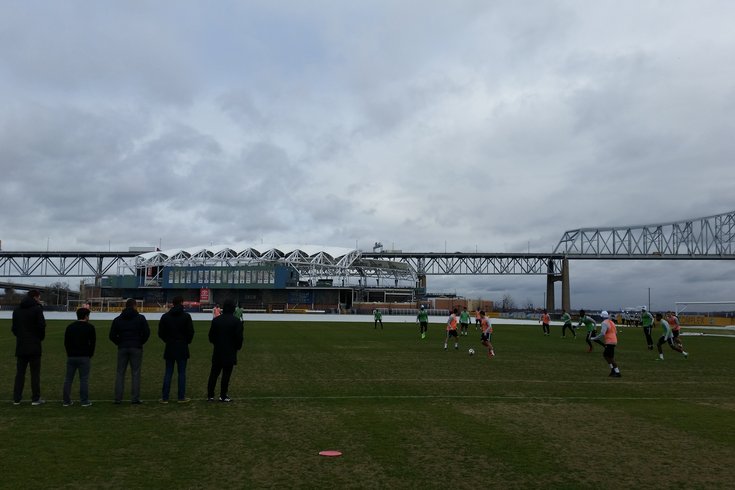 The Union technical staff watches from the sidelines during day one of training camp in Chester."

It was cold, wet, and windy on day one of Union training camp, which really isn't that bad for late January in Delaware County.

The team abandoned plans to practice inside the University of Pennsylvania bubble, instead using the outdoor grass fields at their home base.

The biggest story on day one was the appearance of center back Oguchi Onyewu, a regular starter for the United States national team under Bruce Arena and Bob Bradley.

"Gooch" has bounced around a lot recently. He's 34 years old now and has really only played 20 to 25 meaningful games in the last four years, the bulk of which came during a brief stay at Sheffield Wednesday. That 2014 season was sandwiched between unsuccessful spells at Malaga, Queens Park Rangers, and Charlton Athletic. Onyewu has also suffered from persistent injuries, though he does possess more experience than the four other center backs on the Union roster, combined.

The Union technical staff explained that Onyewu was in camp primarily to train, and not necessarily looking to earn a roster spot.

"First and foremost, he's here as a player who wants to keep up his level of fitness and make sure that he can be ready for any moment where anybody steps in," said Sporting Director Earnie Stewart. "He has a great history when it comes to soccer, so we felt like we had to oblige that. It was really simple. I think it's great for the young players around him, to see his experience. For us it's great to see him here."

The Union are, however, in the market for a veteran center back. The most experienced central defender on the roster is 24-year-old Richie Marquez, followed by second-year players Josh Yaro and Ken Tribbett, plus 18-year-old homegrown player Auston Trusty.

A healthy Onyewu would be a reasonable signing for the Union.

"I don't wanna go that far right now, but you never say never," Stewart said. "That's clear. That's the way soccer is. Obviously, we are looking for an experienced center back, and it's pretty easy (to see) that he fits that mold. At the same time, it needs to be possible and it needs to be a fit, so that's going a bit too far right now, but it didn't take Jim and myself too long, when Oguchi came with the question of maintaining his fitness – (we said) 'yea, we're open to that.' Auston Trusty will get better from that, Josh Yaro will get better from that, and Ken Tribbett will get better from that, just by being able to stand next to him and talk to him and speak to him about game situations."

The staff did use the "trialist" label for two other players, Fabrice, "Fafa" Picault and Adam Najem. Picault is a forward/winger hybrid who earned a U.S. cap while playing for German club St. Pauli. Najem is young midfielder and former Akron standout who came through the New York Red Bulls' youth system. His rights have reportedly been acquired by Philadelphia, though there has been no official announcement.

"(Picault) would be in the trialist category," explained head coach Jim Curtin. "Fafa was at St. Pauli. You guys were out there (at training) for a little bit. You could see he's fast. There's no question about that. He has a bounce in his step and a guy who can add some pace to our wide areas. He's played up top as a number nine, too. But yea, he's a guy who is in on trial right now and checks a lot of the boxes for what we need. We'll see how it goes from there."

The rest of the roster

Missing from camp were Jay Simpson and Giliano Wijnaldum, the English striker and Dutch left back who signed a few weeks ago. Both players will be in camp as early as Thursday, once their transfer paperwork is completed.

There were also a few Bethlehem Steel players in camp, including Seku Conneh, James Chambers, Cory Burke, and Bolu Akinyode.

Captain Maurice Edu did an individual session inside the Power Training Complex. He suffered a broken left fibula last October after spending the entire 2016 season rehabbing a stress fracture in the same leg. Edu is primarily right-footed, so he plants with that left leg.

"You're probably getting tired of getting the same answer and the same story, but I'm just taking it day by day and recovering," Edu said. "It's been about, I'd say nine weeks since my surgery, so the first six weeks are the most difficult, being on crutches and wearing a cast and being in a boot. Now I'm walking around and able to put more weight through my leg. It's just a gradual progression with the mindset of getting onto the field as soon as possible."

Here's what I saw personnel wise:

(There are ten total players currently signed to the Steel roster)

• The team started with passing drills while goalkeepers worked to the side.

• The bulk of practice was 9v9 games with three rotating squads. One team featured a CB pairing of Onyewu and Yaro. The other pairings were Marquez and Jack Elliott, plus Tribbett and Trusty. It looked like they built the teams with a blend of experienced guys and younger guys for a good balance in quality.

• There was one passage of play where Santi Moar dispossessed Ilsinho and laid the ball off for a Marcus Epps shot over the crossbar. On the next sequence, Ilsinho played a line-splitting, one touch outside-of-the-boot pass to create a scoring chance. The Brazilian looks like he's lost 5 to 10 pounds and showed some flashes of that brilliant technical skill, even on a cold and windy January day.

• It looked like Brian Carroll went inside early and did not take part in the 9v9 drills.

• Jim Curtin and assistant B.J. Callaghan were both wearing shorts. They always wear shorts, even if it's 10 degrees and snowing.

• We had six or seven print/digital reporters in Chester, plus video cameras from Action News and NBC 10. I don't recall ever having a bigger media presence on day one of camp.

Curtin said on Tuesday that the Union will wrap up the preseason with a game against Orlando City at the Suncoast Invitational.

That match was originally scheduled against Toronto, but because those teams meet in week two of the regular season, they agreed to play different opponents to wrap up their Florida camps.

Curtin also said that games against D.C. United, the United States U17 squad, and Chicago Fire have been scheduled for the first trip to Florida.

That means the entire preseason schedule looks something like this:

The Union have a new secondary kit, and I think it looks sharp. Here's a pic of Josh Yaro showing off the new shirt. 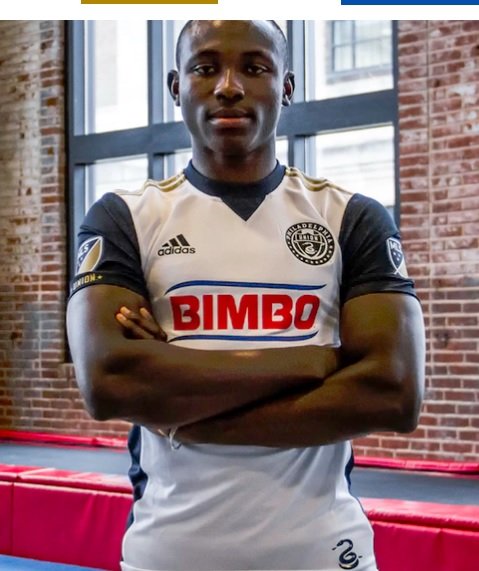 They've worn white-on-white in years past, but this year you've got the blue sleeves for contrast. It reminds me of the Orlando road kits with the purple sleeves. Philly has had some horrendous kits over the years, highlighted by the 2013 home jersey which featured gold on navy with neon blue trim and an off-color "Bimbo" logo slapped on the front. These look classy and they aren't as "busy" as other uniforms. Less is more, in my uneducated fashion opinion.

Here's that Orlando kit, for reference: 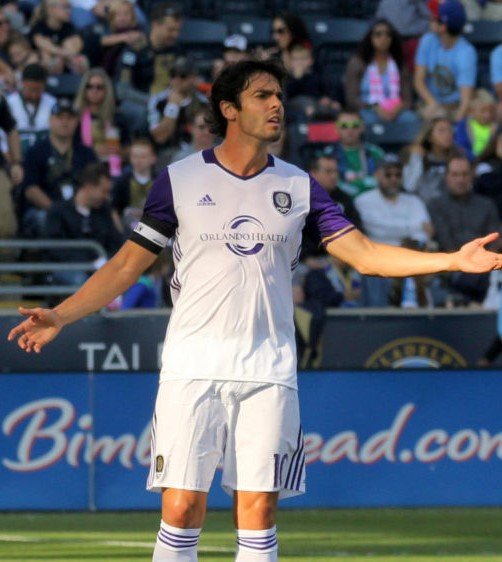