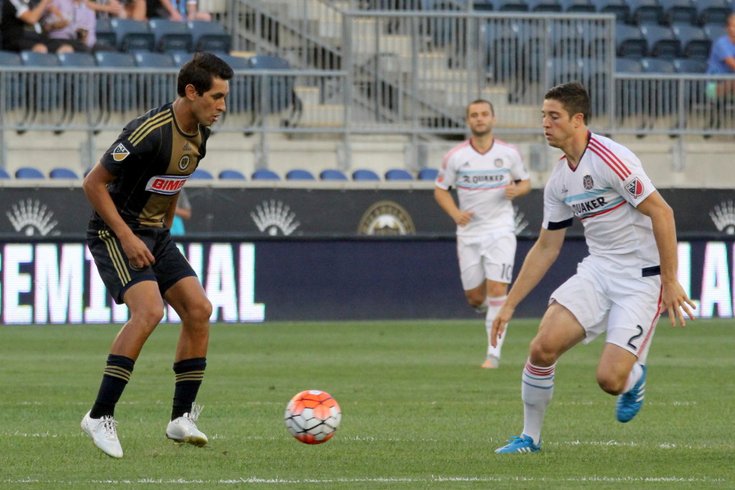 Matt Polster squares up to Cristian Maidana in a Union and Fire game from 2015.

We're five days out from training camp, so the offseason monotony is almost behind us.

The Union start at Penn Park next Monday, then head to Florida the following week.

Here are some of your questions from January 18th.

@Kevin_Kinkead are they still convinced Yaro's ceiling is very high?

Yaro had a weird rookie year. He started with Bethlehem Steel, then earned his first start a few weeks later in Seattle. Some of those early games were excellent, and he showed great awareness, game recognition, and a penchant for putting out fires.

He had the shoulder injury a short time later, then dealt with concussion issues down the stretch, which resulted in Ken Tribbett playing a lot of games at right center back. Remember, though, that there was a patch of games in which both players were healthy and Jim Curtin went with Tribbett over Yaro.

I think Yaro is the better complement for Richie Marquez. He made some rookie mistakes and picked up rookie cautions, but a healthy Yaro should be on the field 100 percent of the time in 2017.

@Kevin_Kinkead any chance of Yaro shifting to CDM? Concussions have to be a concern, plus his speed and passing would excel there.

I think he'd be a good defensive midfielder, but I don't think that's in the works. Tribbett actually has more experience playing as a number six, which dates back to his days with Drexel University and Ocean City.

Yaro does have the skill set to be a number six. His passing and vision are excellent, and he's a natural defender, so he knows how to read the game. I think that guys of African descent have excellent physical traits for this spot because they tend to be rangy and athletic. Think of players like Claude Makalele, N'Golo Kante, Idrissa Gueye, and Victor Wanyama. When it comes to body type and physique, Josh does have similarities to those guys.

@Kevin_Kinkead Will the Union change their formation to accommodate Simpson and Alberg? Will any of the draft picks pan out?

I doubt it. Jim Curtin and Earnie Stewart doubled down on the 4-2-3-1 last year, even when the team was putting together a two-month winless streak.

Keeping the shape means that Simpson probably plays up top and Alberg battles Bedoya for the #10 role.

As far as the second part of the question, I'd think the draft picks would spend the season with Bethlehem Steel. Marcus Epps and Aaron Jones play in positions where the Union is already two-deep.

Bedoya, unless Alberg gets the starting CAM job.

@Kevin_Kinkead will the union be bringing in another forward ?

I don't think so. They currently have Jay Simpson, C.J. Sapong, Charlie Davies, and Fabian Herbers on the depth chart.

@Kevin_Kinkead Any targets for MF or is Bedoya going to slot into the role as desperately need?

@Kevin_Kinkead is there any truth to the matt polster rumors?

There is no Matt Polster rumor. Myself and Matt Doyle identified him as a good trade target for the Union after the Chicago Fire picked up Dax McCarty, which resulted in a bit of overcrowding in that midfield.

There is no published report or sourced information that links Matt Polster to the Philadelphia Union.

@Kevin_Kinkead How much do you see Jones and Trusty playing this season?

I don't know, but I think Jones is more likely get on the field, just because the midfield picture is a little muddy, at least right now. They played him as a number eight at Bethlehem Steel and also in the Crystal Palace friendly from last summer. He's 19 years old with more experience than Trusty.

Trusty just turned 18, and he played LCB for Steel. The staff likes to separate the center backs on the depth chart based on each side of the field, which means that you treat LCB and RCB as two different things. That said, I think Trusty could possibly start the season as the #2 LCB behind Richie Marquez. The RCB spot would be Yaro and Tribbett, assuming they don't sign anybody else.

@Kevin_Kinkead Where will the # 8 come from? Overseas? Move within MLS? Promote from within?

I guess he has to come from inside the league, since they don't have any available international slots. They can always trade for one.

@Kevin_Kinkead Is the veteran CB they're looking for an overseas target or does the current lack of Int'l spots force a domestic move?

@Kevin_Kinkead Aside from trying to be like Europe, why are people so hung up on Pro/Rel?

I will devote an entire article or podcast to this topic someday.

The short answer, I guess, is that they feel like pro/rel will improve the quality of play at both the club and international level. They think that opening the pyramid allows the cream to rise to the top, while underachievers are punished. The most dedicated and productive clubs are rewarded for proper investment and strategy, and the losers take the drop.

I don't disagree with any of that at all. You have mediocre MLS clubs that go season to season without any sort of ambition at all, and there's no repercussion for them. They're actually rewarded by picking first in the draft.

It's much more complicated, obviously, from a business perspective. I don't think the American soccer market can handle pro/rel the same way foreign markets can. For instance, who is coming out to see a division two Philadelphia Union? We're having trouble filling up the stadium for a division one Philadelphia Union. Relegation would cripple this franchise, and maybe Jay Sugarman sells, but there's no guarantee that the next guy can clean up the mess. Sometimes that damage is irreparable, and good luck explaining to the average Eagles fan why the Union are now playing the Charleston Battery instead of the New York Red Bulls.

@Kevin_Kinkead your favorite sub - both player and sandwich

For the player, it would be Roland Alberg I guess.

For the sandwich, there's this place in Northern Liberties called "Trios Fresh Italian" that makes an amazing meatball parmesan. That's my go-to place for subs.