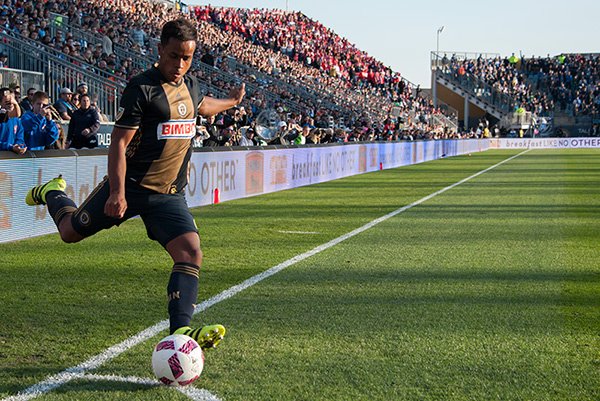 Roland Alberg finished with nine goals in 2016 despite playing less than 1,000 minutes.

Union training camp starts next week, but the week one schedule looks a bit different this year.

Instead of starting practice sessions on Monday, the players will report to the Power Training Complex for physicals. That's usually done on the Saturday or Sunday prior to camp, but they're pushing it back by one day this season.

No big deal, just a slight change there.

They'll start in Chester on Tuesday, with Earnie Stewart and Jim Curtin speaking with reporters afterward. The team was originally going to train indoors at Penn Park but moved training outside because of a warmer-than-usual weather forecast.

Training continues through Friday, then the team will do a weightlifting session on Saturday, followed by Union media day.

This hasn't been the most exciting Union offseason. There were two foreign signings and some late round draft picks, but nothing earth-shattering or ground-breaking – at least not yet.

Here are five things I'm keeping an eye on.

A lot has changed for Alberg in the past year, who became a father this winter. He'll return to Philadelphia with a familiarity of the city and American culture, plus a year of MLS experience under his belt.

Alberg is likely going to fight for time at the number ten spot this year with Alejandro Bedoya, similar to the way that he was stuck behind Tranquillo Barnetta last season. I just don't see the technical staff playing Bedoya as a number eight this season. I think they signed him with the intention of making him the focal point of the attack, and I don't see the system changing either.

One thing to consider is that Bedoya won't be with the Union when training camp starts. He'll meet up with the team when the U.S. wraps up January camp with a pair of friendlies in San Diego and Chattanooga. If the Union play short-sided games, maybe 9v9 or 8v8 during the first ten days of training, then Alberg will get a chance to play in that central role. We might get an early glimpse of a second-year Alberg in his best position.

Similar to Alberg, Ilsinho is a guy who probably didn't show his true potential last season. He seemed to adjust well enough to the league, but suffered from injury issues and didn't do enough to impact the score sheet when he did get on the field.

After Sebastien Le Toux's trade, Ilsinho was supposed to be the guy at right midfield, but those injuries kept him on the shelf and Fabian Herbers, who started the season as a backup striker, played well in that wide role. Herbers finished with three goals and seven assists, and all but one of those tallies came during the second half of the season while playing in the midfield.

The technical staff seemed to rate Herbers highly during his rookie year. He came off the bench frequently in the early part of the season and even played a bit as a number ten over Alberg when Tranquillo Barnetta was injured.

Who would you give the minutes to? Do you give them to Ilsinho? He's 31-years old and might not be around after this season. Or do you give Herbers, a 23-year-old draft pick, the bulk of the minutes on the wing as you build for the future?

That's a question for Curtin and Stewart.

At the Cocktails and Cleats gala, Earnie Stewart singled out Fabinho as one of the veteran players who took a step forward in 2016.

He's not wrong. After a shaky season opener, Fabi really showed a lot of consistency at left back, improving his defensive qualities while still showing an ability to get up the flank and put crosses into the box. A lot of people, myself included, disagreed with the decision to protect Fabinho in the 2015 expansion draft, but that turned out to be the right move, as he's steadily improved since signing with the Union in 2013.

Fabinho turns 32 this year and is going into the final year of his contract. He's competing now with new signing Giliano Wijnaldum, a 24-year old who played for Stewart at AZ Alkmaar and already has experience in the Netherlands and Germany.

This is similar to the right wing situation; do you play the veteran or let the youngster take over? I'm interested to see if this turns into a positional battle in camp.

How fast can Jay Simpson adjust?

When you look down the list of English imports to MLS, there's a lot to process.

You've got the seven-figure superstars, like David Beckham, Steven Gerrard, and Frank Lampard.

You've also got players who came here on short term loans or played one full season or less, such as Hogan Ephraim, Grant Ward, and Zat Knight.

Then, somewhere in between, you find guys like Luke Rodgers, Tyrone Mears, Nigel Reo-Coker, and Bradley Wright-Phillips, all of whom found varying degrees of success in a new league.

Union fans hope that Simpson can become the next Wright-Phillips, i.e. a lower-division Englishman who can find his scoring touch in America. Wright-Phillips isn't just a success story, though, he's a two-time Golden Boot winner and one of the best strikers in the league.

You can use BWP's achievement as a template for Simpson, but don't expect the latter to score 27 goals for the Philadelphia Union. If Simpson can finish in the 12 to 14 range, then his season is going to be an absolute success. This team has only had six double-digit, individual goal scoring seasons, and Sebastien Le Toux is responsible for three of those. In 2012 and 2015, the club didn't have a single player reach double digits. C.J. Sapong has never had a double-digit goal scoring season, even as a Kansas City player. Only Jack McInerney, Chris Pontius, and Conor Casey join Le Toux as double-digit Union goal scorers.

The bar is not that high, but expecting Simpson to become the next Bradley Wright-Phillips is a dangerous thought.

One positive is that Simpson enters the league in January, with a full preseason to prepare. Wright-Phillips came in midway through 2013 and scored one goal in seven appearances. He didn't have that breakout until 2014.

Who else shows up?

This roster is not complete. We've got Stewart and Curtin on the record, talking about the addition of a "controlling midfielder" and maybe an experienced center back.

We know we've got Simpson and Wijnaldum, plus five draft picks coming to camp, so that's at least seven new faces. Maurice Edu might be healthy enough to train. I'm not sure if the Bethlehem Steel players will be involved, or if some academy kids will also train at Penn Park. The staff tends to mix and match and have different groups of players train together, which allows some of the younger guys to get good experience playing against first teamers.

There are usually a number of trialists as well, and that's where the real interest is. Last year, Ken Tribbett was a surprise attendee on day one and he ended up starting in the playoff game. Years prior have given us names like Georgi Hristov, Moussa Maâzou, and Pantelis Kafes.

In addition to Bedoya being gone on international duty, you've also got Pontius and Keegan Rosenberry with the national team. I'd assume that Ray Gaddis plays right back in any kind of short-sided game, but I'm interested to see who goes over to left midfield.