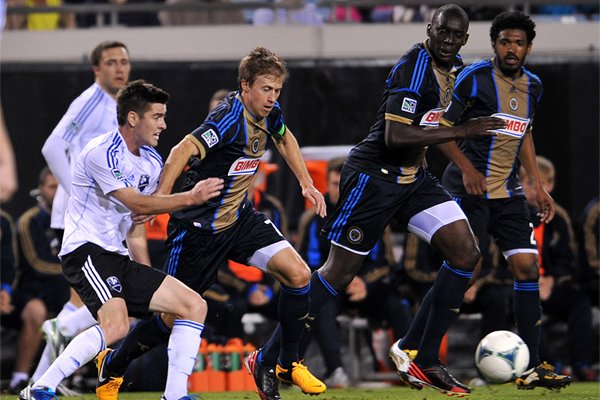 Brian Carroll battles for the ball in a 2013 preseason game against the Montreal Impact. This will be the fourth straight year of Union training camp in Clearwater, Florida.

At long last, we've got a few exhibition games on the Philadelphia Union calendar.

The club confirmed on Tuesday afternoon that it will once again take part in the Suncoast Invitational, hosted by NASL side Tampa Bay. The Union open the tournament against the Rowdies on February 18th, then play Montreal and D.C. United on February 22nd and February 25th.

I'm not exactly sure when the team will travel to Florida, hence the question marks. They typically do one week at home, take a day or two off, then fly down to Clearwater to get outside on natural grass. They usually train at the Joe DiMaggio Sports Complex, which is across the street from the Phillies' recently renamed "Spectrum Field."

There is normally an exhibition game during that first Florida session, but nothing has been announced so far. The Union played the Jacksonville Armada in 2015 and 2016, then had a scrimmage or two before beginning invitational play. I think we might see a friendly added for February ninth or tenth.

The team also holds an open training session for fans, normally on the Wednesday or Thursday of week one. As of now, there's no news on when or if that is taking place.

The Union made three selections in rounds three and four of the MLS SuperDraft, which took place via conference call on Tuesday.

I don't know much about these guys.

Nanco lead the Orange with seven goals in 20 games this season. The Ontario native is a 5'6", 145-pound forward/winger hybrid with next-level pace.

Elliott is a towering, 6'5" center back from London. I'm a West Virginia alumnus and I'm ashamed to say that I watched zero Mountaineer soccer games this season. I called a former classmate of mine, Mike Minnich, who broadcasted a few WVU games this year. He described Elliott as a guy who is "strong in the air but also adds to the attack." He also added that he's "very smart, close to a 4.0 GPA". I asked if a comparison to Colorado's Axel Sjoberg might be fair, and Mike told me that Sjoberg is a "bit thinner" than Elliott, but probably "stronger tactically." The comparison, however, was not far off.

As far as Santi Moar, he's a Spanish forward from a tiny North Carolina college. He had 14 goals and 19 assists this season, playing in a conference that includes powerhouse programs like Erskine College and the University of Mount Olive. Moar strikes me as a Dzenan Catic type, which is to say that he's a natural goal-scorer who went relatively untested in college. Catic scored boatloads of goals against NAIA competition in small-town Iowa, but couldn't break into the Union first team and ended up in the USL.

I don't put much stock in these late round picks because history shows that a lot of these guys just don't pan out. That trend will continue as more young players go pro via academy systems instead of spending three or four years in college.

For reference, here's the list of Union picks that go beyond the second round:

In the last five years, only Richie Marquez, Leo Fernandes, Antoine Hoppenot, and Raymond Lee have appeared for the first team. Marquez is the only one on the list who truly panned out.

This year, there is at least a landing spot at Bethlehem Steel, where young guys can get meaningful minutes. In years past, players were simply cut, since Harrisburg could only handle three or four Union loanees per season. Ideally, the Union's five draft picks can help fill out the Steel roster.

Reminder that 18% of 3rd, 4th round picks since 2014 have even played a single minute in MLS and average 88 career minutes per player.

A couple of local products were also picked up in Tuesday's draft.

Penn State forwardConnor Maloney, who trained with the Union this season and spent time in the club's youth setup, was selected by the Columbus Crew. Nittany Lion teammate Robby Sagel was picked up by Houston. Both Maloney and Sagel spent time with Reading United.