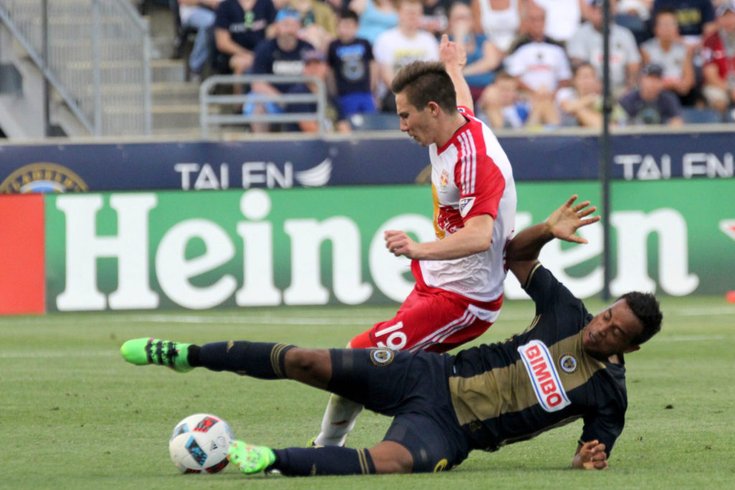 The Union and Red Bulls will meet three times in 2017, with two of those games taking place at Talen Energy Stadium.

This schedule looks more manageable than the one the Philadelphia Union had to go through last year.

The 2017 slate does not feature a horrendous, three-game road swing that bleeds into October. Three of the top four Western Conference teams are traveling to Chester. You're also looking at two home games against the Red Bulls and just one trip to North Jersey.

That last one is strange since the same thing happened last year. I thought, for sure, that Philly would be playing at Red Bull Arena two times this year, but I think the quirks of an unbalanced schedule, and the addition of two expansion teams, kind of threw a wrench into the assumptions that we made this offseason.

Everything else looks relatively normal. The Union will play each Western Conference team one time only, with road trips to Vancouver, San Jose, Real Salt Lake, Los Angeles, Kansas City, and expansion Minnesota.

The Western Conference home games are against Dallas, Colorado, Portland, Seattle, and Houston.

That's six road games and five home games on the non-conference schedule, which is staggered now because the addition of Atlanta and Minnesota leaves each conference with an odd number of teams (11).

As far as the Eastern Conference slate, Philly plays Red Bull, Montreal, and D.C. United three times each. There will only be two games against New England, Columbus, Chicago, NYC, Toronto, Atlanta, and Orlando.

There doesn't seem to any science in deciding who plays each other three times, versus who plays each other two times. Some of that is based on rivalry, proximity, and television interest. You always want NYC and Red Bull to play three games. That's the same with Portland/Seattle and Toronto/Montreal.

The Union do get a bump in national TV exposure this season. Four games will be televised on ESPN and one on Fox Sports 1. Last year, Philly appeared just once on FS1 and didn't even feature on ESPN during the regular season.

Let's go month by month and see how it shakes out:

March is difficult, but at least you're getting that Vancouver trip out of the way early. This isn't going to be a six-hour flight in the middle of the season. Anything can happen in week one, and even though Vancouver won in Philadelphia last year, they're a team that's coming off a disappointing, 15 loss season.

The Toronto home game might actually be more difficult. This is the first of just two games against TFC in 2017, so Philly lucked out in not having to play the defending conference champions three times this year.

The trip to Orlando is winnable. Philly snagged a 2-2 draw down there last year in a poorly officiated game. They'll be better under Jason Kreis but they still have defensive issues to figure out.

The trip to D.C. means that Philly starts with three of four games on the road.

If you get a result in Orlando or D.C. or even take 3 or 4 points from the first four games, I think you're in decent shape with three winnable home matches in the middle of April. Portland historically is not great on the road, and you get early cracks at two Eastern Conference playoff teams, one of which is a Friday night on national television. Philly always shows well during those April and May primetime games.

I don't see the Union getting anything out of the April 29th trip to Los Angeles, so you probably need five to seven points out of those three homes games.

If you're coming off a Galaxy loss, then the May 6th game against New York will be interesting. A result in that game gives you a bounce going back to D.C., or else you're on the road facing a three-game losing streak.

There's no excuse for losing to Houston at home, and you get a very good Colorado team at home just three days later. It's a short turnaround, but the Rapids have a Wednesday game in Chicago that week, so they'll travel to Philly as part of a two-game non-conference trip. Ideally, Colorado shows up in Chester with tired legs from two flights and a midweek match.

This is where Philly started to fall apart last season, so I'm fairly confident in declaring that June 18th at home to Red Bull is the most important game of 2017, at least on paper. You get a point or three in that nationally televised game, then you've got a third and final crack at D.C. just six days later, also at home.

The United States plays Mexico at the Azteca on June 11th, which means that Alejandro Bedoya and maybe one or two other guys will be gone for international duty. Andre Blake will likely be out as well. Depending on when those guys return, that week of preparation and recovery heading into the Red Bull game is going to be critical.

A bunch of games are shoved in here around the Gold Cup break. This is actually the first time that MLS has decided to pause for the group stages of the competition.

You're finishing up a three-game home stand against New England, then you hit the road for a tough trip to Kansas City.

Three of the next four are on the road, including a weird home-and-home against Columbus with just three days in between.

I think the Gold Cup really influences how this stretch goes. Just like the June break, you're looking at multiple players that could be gone for the tournament, and return to Philly tired and/or late. I don't think the Union are bringing a full strength team to Montreal. Maybe Bedoya joins up with the team in Columbus. Who knows? The June break will be a good barometer for how this plays out.

Either way, I think this cluster of road games isn't all that bad. You could theoretically be playing at Toronto, NYC, and Red Bull, but you're getting the middle and bottom of the eastern conference with this stretch of Montreal, Columbus, and New England.

Philly got smoked by Dallas in last year's season opener, so they come to Chester in 2017. Montreal comes to town one week later.

These two games are monumental. They're monolithic. They're tremendous. You have to take points from these matches before hitting the hardest part of the schedule, which features four road games with expansion Atlanta sandwiched in between.

Last year, Philly dropped points at home before going on that brutal three-game road swing. If you stumble on August 12th, you're going to have to make up ground at San Jose or at Toronto before coming back home. Then, if you drop more points at home to an expansion team, you're trying to pick up the pace at Minnesota and at Red Bull.

There's not a lot of margin for error in late August and early September.

Philly will be in the clear come mid-September, which gives you some breathing room down the stretch.

Last season, that road swing carried into early October, leaving the Union with only two home games to fight for their playoff lives. This year, you exit that gauntlet with three winnable home games and a pair of reasonable road trips.

I think Chicago will be much improved this year, but that September 23rd home game looks like another must-win. Philly played poorly against the Fire last season.

It's another short-turnaround situation going to Atlanta, so I'm not sure if that 9/27 game is going to result in points.

This is the easiest October schedule that Philly has had in a long time.

Don't get me wrong, the Sounders are the defending champions, and they're going to be good again this season. The best case scenario is that Seattle is already qualified for the playoffs and going through the motions by the time this cross-country trip comes around.

Finishing at Chicago and home to Orlando really isn't bad at all. It's much better than finishing with Red Bull at home.

If the Union are playing in November, then you know it's been a successful season.

If the Union are playing in December, then it's been an incredibly successful season.