A way too early look at the Union's 2017 depth chart 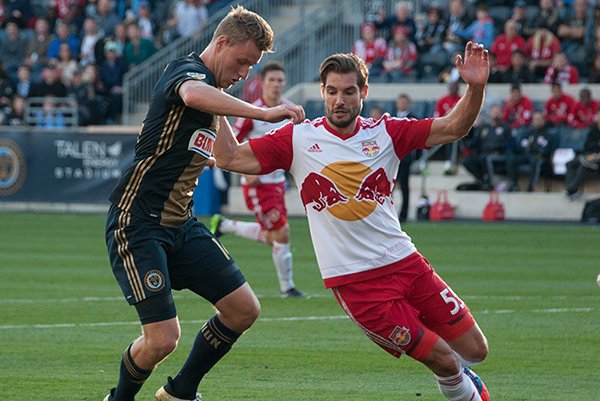 At this point in January, we'd normally be talking about the MLS SuperDraft.

But the Union doesn't have a first round pick this year -- and I didn't watch a single minute of college soccer in 2016 -- so I won't waste your time with a half-hearted mock draft based on Youtube clips and other writers' work.

Instead, let's take a crack at the Union depth chart, which is starting to shape up a bit as we head into training camp. The team begins at Penn Park on January 23rd, then travels to Clearwater, Florida one week later. I haven't heard anything about an open session for fans, but they generally do it at YSC Sports on that first Wednesday or Thursday.

Everything below is based on the Union's 4-2-3-1 system, which I doubt changes going into the new campaign. The club filled all seven international slots, so there's no more room for foreign signings unless they acquire an eighth slot via trade or move a player.

I'm assuming Simpson is the starter going into this season. Why else would you use an international slot and targeted allocation money on a League 2 striker? You don't go that route unless you feel like the incoming player is an upgrade.

Fabian Herbers played as a number nine last year before sliding out to the wing, so I'd add him to this depth chart as well.

Philly only uses one striker, so there's not much wiggle room here. Sapong can play out wide, and last year he would usually move to the left wing when Chris Pontius came off the field in late game situations.

I don't think you're going to see these guys on the field at the same time, outside of scenarios where you're throwing an extra striker on the field in an attempt to find a late goal. You'll probably see Simpson starting up top, then a straight swap for Sapong or Davies in the second-half.

Of these four strikers, Herbers and Sapong are the likely candidates to see additional minutes on the wings. I don't think we'll see Simpson or Davies out there.

Starting with that advanced midfield line, I think the biggest question is who claims Tranquillo Barnetta's number ten position. Roland Alberg played that role last year in Barnetta's absence, and also when the departure of Vince Nogueira pulled Barnetta back into the number eight spot.

Alejandro Bedoya played as a number ten in Toronto, which is a game that Barnetta missed through injury. Bedoya looked pretty good in that role and scored his first goal with a nasty chip over Clint Irwin's head.

I don't think Bedoya was too effective as a number eight. He had much better ball-winning and defensive qualities than Nogueira, but didn't boost the possession game in the same way. I've got a hunch that Bedoya plays in the Barnetta role this year, because he plays that two-way bulldog-style game that Jim Curtin prefers. Bedoya is a guy who can probably press from the CAM spot.

On the wings, you've got leading goal scorer Chris Pontius returning on the left with Ilsinho and Herbers on the right. Ilsinho was hampered by injuries last year, which allowed Herbers to really flourish towards the end of the year in a new role. It'll be interesting to see how those minutes are divided this year, or if Herbers gets more time as a number nine instead.

Depth is a bit iffy on the left. I actually really like Fabinho in that spot, and if Giliano Wijnaldum earns the starting left back job, I wouldn't mind seeing more of Fabi in an advanced role. He has the attacking instincts to play in that spot, and it doesn't require as much defensive responsibility, obviously. Sapong, as I mentioned before, can also play over there.

Eric Ayuk, assuming he stays with the first team this year instead of playing for Bethlehem Steel, would likely be the next guy up at both wide midfield spots.

I think these two spots are the biggest question marks going into the season. Earnie Stewart has said that he'd like to add another player in this area.

You obviously have Maurice Edu returning from injury at some point in the season. He can play both roles and will be starting somewhere in the midfield when he's healthy.

If you use Bedoya as your No. 10, then he's not playing the eight, which leaves you with Warren Creavalle or Derrick Jones in that position. Creavalle was an excellent destroyer and disrupter in the middle of the field, but he just doesn't move the ball effectively as an eight. Brian Carroll, who quietly had a good season, is now 35 years old and can't be asked to play as many minutes as he did in 2016.

I assume that we'll see another signing at one of these positions, but you can solve the problem by changing the shape. I highly doubt that happens, but I think something like this would be incredibly effective. 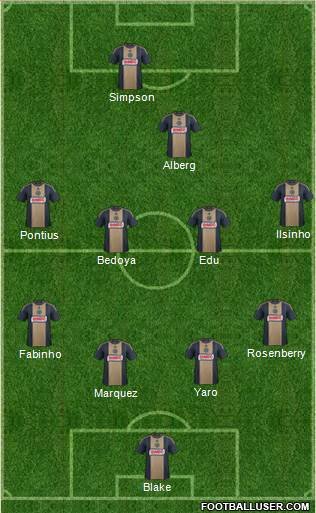 This is just a flat 4-4-2, or really a 4-4-1-1 since Roland Alberg plays like a tweener and/or second striker. Bedoya and Edu are both athletic and mobile enough to deploy in twin box-to-box roles, similar to the way that the LA Galaxy paired Juninho and Marcelo Sarvas during those title-winning years.

You've got a pair of international quality midfielders on this roster, so you have to maximize their potential contributions, especially if Edu can finally get healthy.

I love the Wijnaldum signing and I wouldn't be concerned about his lack of games at Alkmaar.

He was promoted from the academy at age 18 and sat behind Simon Poulsen for the first two seasons. Poulsen was Denmark's starting left back and eventually earned a transfer to Serie A, which opened the door for Wijnaldum at age 20.

I think he'll compete with Fabinho for the left back job, and if he doesn't win it this year, he'll take over full time next season when Fabinho's contract expires.

On the right side, you've got Ray Gaddis backing up Keegan Rosenberry. Ray can also do spot duty on the left, which is the result of various coaches playing him out of position during the early part of his career.

For the first time in a long time, the Union have quality and depth at both fullback spots.

I'll put a big asterisk on the center back spots because I still think that Edu is the team's best defender. Curtin went on the record last January with confirmation that Edu would play in the midfield when he was healthy enough to return. In my mind, he tops the depth chart at four different positions, which is a belief that I've held since late 2014 or early 2015. Carlos Valdes, Ethan White, and Steven Vitoria each played center back during those two seasons but they just were not as effective as Maurice was.

This year, assuming Edu plays in the midfield, you're looking at a CB group that is still relatively young. They did log a lot of minutes in 2016, which provides a good foundation to build on.

I think Josh Yaro and Richie Marquez is the starting pairing as of January 11th, 2017. Yaro was a rookie last year along with Ken Tribbett, who also played on the right side. Auston Trusty, the homegrown product, played LCB in the Bethlehem Steel games that I watched, so I'm assuming he's a backup for Marquez going into the season.

I still think it's in the club's best interest to sell Blake, but with the addition of Simpson, my theory of using Blake sale money for a DP striker seems to be dead in the water.

That's not such a bad thing. It looks like the reigning goalkeeper of the year will be returning for 2017. The departure of Matt Jones places John McCarthy at the backup spot and a third goalkeeper will need to be added to cover for injuries and national team duty.