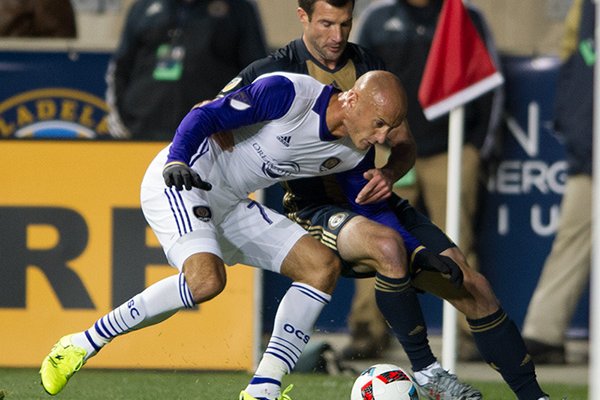 Chris Pontius will rejoin the U.S. national team for the first time since 2011.

Maurice Edu missed out last year via injury and Jeff Parke participated in 2013.

This year, three Union players will take part in Bruce Arena's first camp since the new boss took over for Jurgen Klinsmann back in November.

Veteran Alejandro Bedoya has more than 50 caps for the USMNT. Chris Pontius returns to the squad for the first time since 2011 and 23-year-old right back Keegan Rosenberry earned his first call to the national team.

The trio of Union players leave for San Diego this weekend. They spoke with reporters on Friday afternoon via conference call.

On his first national team call:

"Extremely excited. It was interesting, Bruce kind of let (the news) slip a little earlier, but I couldn't be more excited. Having a couple of teammates out there means the world I think, just to have that familiarity. I talked before about how when I came to (Philly), I knew some of the staff and the players and was familiar with the facilities and stuff like that. Hopefully, that gives me confidence going into this camp. And then the experiences like All-Star week and going to MLS Cup and interacting with players that are (also going to be in camp) helps out as well. It's as silly as just knowing guys' names and shaking hands beforehand. That means a lot to me and hopefully, that helps me perform well out there."

On whether he's spoken with teammates Chris Pontius and Alejandro Bedoya:

"Not too much. I think when I get out there I'll talk to those guys a little bit. But you don't want to seem too much like the 'young guy.' You don't want to show your ignorance, if you will. You try and play it cool the best you can until you get out there I guess (laughs). I'm looking forward to seeing those guys. I haven't seen them in awhile."

On playing with the national team during a scrimmage that took place after the June 11th Copa America win in Philadelphia:

"At the time I thought, what a coincidence, they need a right back. We happened to be training that day and they needed to give a couple of guys a run after their game. The more I thought about it, it was like, 'they're giving me a proper look' kind of a thing. For that to be in our setting, with our players, with our staff, it was a perfect opportunity for me to feel really comfortable and try to settle in and play. This is a different (national team) staff, but to meet some of the guys and play alongside some of the guys who are going to be (in January camp), that was really important. Hopefully, it will pay dividends."

Honored to receive my first call up for January camp, can't wait to get to work! 🇺🇸 #USMNT

On the call up:

"It's been a while. I think the last time I got called up was after 2012 but I wasn't able to go to January camp due to injury. This is all part of the process of getting healthy and being able to put a full season together, and it finally came about this year. I'm ecstatic to get called back in. If anyone isn't striving to be on the national team, then I think there's something wrong with that. As an American player, that's the ultimate prize for us."

On going into camp with two Union teammates:

"It's great. Both are well deserved. Ale has been in the national team picture for a long time. He's a veteran in terms of the national team in his playing career. And Keegan, I think he performed better than anyone thought he would this year. A lot of people hit a rookie wall and Keegan busted through that. He played above his age and shut some (good) players down. Both are well deserved, and it's nice for me because there's a certain amount of familiarity going into camp with these guys."

Where was returning to national team in your set of goals when you returned to the field last year?

"It (ranked) after performance for the Union, because without performance for the Union, this doesn't fall into place. Before the season I talked with Jim (Curtin) and Earnie (Stewart) and we put some goals on the table. I hit some of those goals and there are others that I'm always looking to improve. There are things that I can do better, but it's nice to be rewarded after this season and get a January camp call up."

Was there a point at which you didn't think this was going to happen again?

"Yea, certainly. There was also a point where I didn't think I was going to play again. There were a few stretches of injury, especially after the hamstring surgery on my left side, where you start to wonder if you can ever play again. Going through the rehab process, my body wasn't responding the way that it should have been. It was an idea that sort of pops into your head, but I had some good people around me in D.C., and certainly in Philadelphia that got me back on the right track and I was happy to be healthy and playing in 34 games this year. I didn't play in the last game because we had the playoff game on the following Wednesday, but that was the only game I had to sit out last year."

What's the mood of the team after the tough start to this round of World Cup qualifying?

"I think, obviously, the mood after the last two games was not very good at all. You could hear a pin drop in the locker room after that game in Costa Rica. Everybody was in shock and the display was not good. I think everybody knew that. Now that some changes have been made, this camp is about turning things around and getting back on the bright side of things. I think January camp in southern California, nice weather, and hopefully really good training sessions with new faces and new guys and kind of a new environment... hopefully that gives us some momentum going into those big qualifiers in March. Obviously January camp ends with two games, and you see some new faces with a mix of veterans, hopefully, that pushes us to good results in March that we so desperately need because we need to get back on the right track."

On playing for Bruce Arena:

"Everything that I've heard from players, from former teammates of mine, it's all good things. (They've said) he's a great person, great character in the locker room, and that he's a players' manager, a players' coach, so that's always good to hear. He knows the system very well, he knows the national team well, he knows CONCACAF and the region. That all bodes well for us moving forward and I hope I can come in there and get to know his style and be a part of his team moving forward."

On going to camp with Pontius and Rosenberry:

"It's awesome, it's great. It's great for the club, first and foremost, and that's one of the reasons I was attracted to Philly, was because of the ambitions of the club moving forward. Speaking to Earnie and Chris Albright and Jim, it was a testament to the team. I know I was very happy for Chris Pontius to get the call up because I remember rooming with him at my first January camp, which was I think our first January camp together. Through all this time he's suffered from injuries and mishaps, so to see him play through all of that and have such a great season and get a call up is well deserved and a great achievement for him. With Keegan, to see a rookie play every single minute in MLS, that's very impressive. I'm very happy for him. He's got great potential and a great future and hopefully we'll see more of those young kids coming (through). There's a lot of potential here in Philly and I'm happy to be a part of that. I'm looking forward to playing with them."