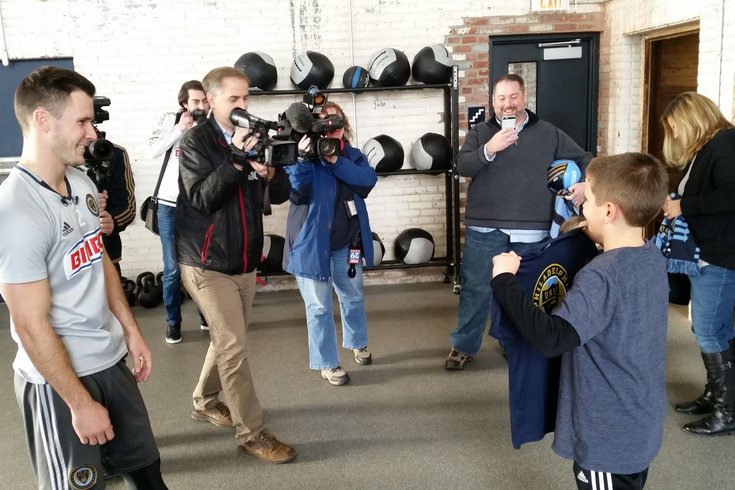 You probably recall a childhood moment that made a big impression on your sports fandom.

For me, it was a Flyers goal, but not from Eric Lindros or John LeClair. It came from Karl Dykhuis, who somehow knuckled an overtime winner past Dominik Hasek in round one of the 1995 Stanley Cup Playoffs. When you're 11-years old and attending your first game at the Spectrum, it turns out to be a formative moment.

For Ethan Chambers, that moment was captured in a video that quickly went viral. The nine-year-old Pottstown native became overwhelmed with emotion when he received Philadelphia Union tickets and a personalized letter from Keegan Rosenberry on Christmas morning.

Friday, Chambers and his family met Rosenberry at the club's Power Training Complex. They were given a full tour of the facility and got to spend more than an hour with the Union fullback.

"You don't get to play pool with a famous soccer player all the time," Ethan remarked.

He says he's been a Union fan since he was four-years old. That would date his fandom to the 2011 season when Peter Nowak's second-year team finished in third place in the Eastern Conference and secured the first playoff berth in franchise history.

Ethan, in his own words, has "tried" other sports but says that they "don't work" for him. Soccer is his main focus.

"Maybe I didn't play how I was supposed to play, but with (soccer), I understand it and I love it," he said.

Rosenberry greeted Ethan with a personalized Union jersey. He took the family through the Union weight room, into the locker room, through the spa area and upstairs into the player's lounge and cafeteria. The tour carried through the film room and back downstairs, where the group took some time to speak with the media.

Rosenberry, who grew up near Lancaster, can somewhat relate to Ethan's experience.

He remembers attending Union games in the early days of the franchise, before spending time in the club's youth setup, leaving for Georgetown University, then winding up back in Pennsylvania when the team drafted him with the third-overall pick in 2016.

"I used to come to a couple of games here when the team first started," Rosenberry recalled. "I was a little bit older because (the team was created) so recently, but yeah. To see both sides is really unique, and that’s why this is so special to me, being able to interact with fans and form bonds. I would say the first couple of Union games meant a lot to me and the experience I had here as well." 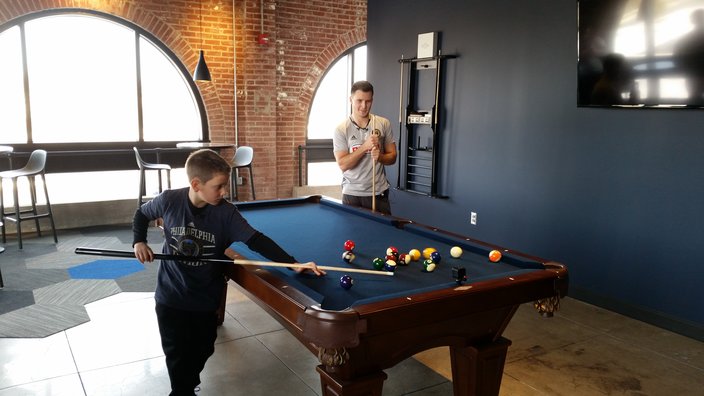 Ethan Chambers and Keegan Rosenberry played a game of pool in the Union player's lounge.

Shawn Chambers points out that his son does play basketball in addition to soccer, though Ethan prefers the latter. The elder Chambers is part of the generation that grew up watching football, basketball, baseball, and ice hockey.

"Huge sports fans," he explained. "I can't honestly say I was a soccer fan until (Ethan) started because I didn't understand it. But we both watch all of the Philadelphia teams, and this is the only team where he (asks), 'can we watch the Union tonight?'. He asked for a (single) ticket for Christmas, just for one game."

When asked about a formative moment from his youth, Shawn, a central Pennsylvania native, recalls his first Phillies game.

"My parents really didn't drive out of town a whole lot, so we got there really early," Chambers said. "We ended up in the players' parking lot. I remember Tommy Lasorda got out of his limo and wouldn't sign autographs because he would have had to sign them for everybody, but then Orel Hershiser showed up and started signing autographs. Obviously, they weren't with the Phillies, but it was just cool to be there and be at the old Veterans Stadium. I remember that."

The Chambers family was at Talen Energy Stadium last season for the Union's 3-2 loss against the Vancouver Whitecaps. The trip was part of a fundraiser for Ethan's club team, the Pottsgrove Force.

In years past, you might have taken your kids to a KiXX game, or sent them to a summer soccer camp, but there wasn't a first-division professional team in town. If you wanted live action and a chance to meet the players, the closest thing was D.C. United or the New York/New Jersey Metro Stars, and most people weren't making those trips.

For kids like Ethan, there's now a local soccer team to grow up with.

"I think it's great," Shawn said. "I know the Union have academies, his club's jersey is in the stadium, and for kids – say you watch the international game – it's just not tangible. You can watch the players. But to actually be able to come down here, it's so accessible. We couldn't believe how great are seats were, how close we were to the actual playing field. And there was accessibility afterward. The players were sticking around and signing autographs. That's really cool for kids like this who want to play soccer. It's the world's sport, and when you think of big teams (in Philadelphia), you don't necessarily think of soccer, but it's all we talk about in our house." 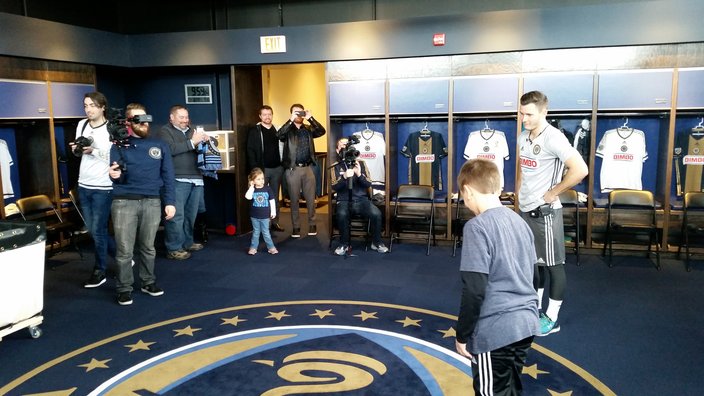 Rosenberry and Ethan tour the players' locker room inside the Power Training Complex.