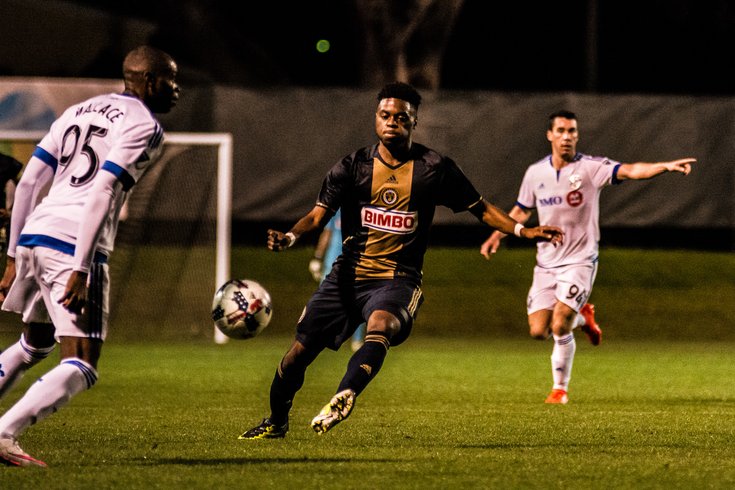 The Union settled for a 2-2 draw with Montreal in game two of the Suncoast Invitational Tournament.

The Union conceded a 90th-minute equalizer in an entertaining 2-2 draw with the Montreal Impact on Wednesday night.

Ilsinho and C.J. Sapong scored the goals for the Union, which were answered by Nick Depuy and Anthony Jackson-Hamel.

Several Union players were unavailable because of injury, including Warren Creavalle, Chris Pontius, and Fafa Picault.

On a conference call Thursday afternoon, head coach Jim Curtin explained that Creavalle is dealing with a groin issue, while Pontius has some hamstring tightness to go along with a rib bruise he picked up in the recent USA vs. Jamaica friendly.

As far as Picault, he was spotted on crutches Wednesday evening.

"It was a weird one," Curtin said. "He's been slated to go with the first group now in the (past two games). We were hoping to get him a significant amount of minutes. He woke up the morning of the game with what they think is a bone spur in his big toe, something that we're going to get a picture taken of. The crutches were just precautionary because it's painful for him to walk. It's not like it's a broken bone or a twisted ankle. He just woke up in the morning with it. We haven't gotten a real clear explanation as to what caused it. He's not aware of what exactly caused it. It's unfortunate timing because he's a guy with a ton of pace who's been very good in training."

My observations and notes from the Montreal game:

• Possession was heavily lopsided in the opening 25 minutes. Montreal's experienced midfield and defense held onto the ball with relative ease and created a couple of scoring chances with Nacho Piatti coming down the left flank. Outside of a Fabian Herbers half-chance, the Union really couldn't get a sniff of the ball.

• Ilsinho's goal came against the run of play. The Brazilian found himself on the left side of the field, juked his way into a pocket of space about 30 yards out, and hit a wicked shot that bounced in front of Maxime Crepeau and inside the left post. Curtin pointed out on the conference call that getting Ilsinho to shoot more has been a preseason point of emphasis.

• Haris Medunjanin wasn't as influential in this game because of those early possession numbers. He started to get on the ball a bit later in the first half and connected some nice short passes. In the first 35 minutes, Montreal did a good job of closing down space and denying passes into Herbers, Ilsinho, and Alejandro Bedoya.

• Not a lot of touches for Jay Simpson, who usually received the ball with his back to goal. He did have a nice early run into the left channel, which resulted in a dangerous left-footed cross to the back post, but most of his limited work came in a target man capacity.

• The Union started to come into the game about five minutes after the opening goal. The pressure was better, the passing was sharper, and the team just started showing more urgency to close down space and start winning 50/50 balls. Derrick Jones, in particular, had a couple of strong wins in the midfield.

• Andre Blake looked like his usual self, making a really nice diving save on Patrice Bernier about 44 minutes in.

• Only two changes at halftime, with John McCarthy replacing Blake and Roland Alberg replacing Jones. That switch moved Bedoya into the number eight spot after playing the first half as a number ten. Montreal made eight halftime changes.

• Oguchi Onyewu had a nice game. He made the necessary plays without many mistakes at all. There was one foul on the edge of the area to start the second half, and he accidentally hit a Montreal player in the private parts, but it happens.

• A really nice passage of play about 55 minutes in saw some composed passing between Onyewu, Rosenberry, and Medunjanin. The end product was Ilsinho getting the ball in the channel and hitting a square pass for Herbers, who blasted a shot over the net with a defender closing him down.

I thought this was the best passage of play from the entire game - pic.twitter.com/Jt10AGrWj6

• The "starters" played 63 minutes. Wholesale changes included Jack Elliott, Brian Carroll, Marcus Epps, Ken Tribbett, Sapong, Ray Gaddis, Adam Najem, and Giliano Wijnaldum. Najem played as a number eight with Epps on the right side of the midfield. Herbers got an extended run on the left, which is where Pontius normally plays. Herbers came off for Anthony Fontana after 76 minutes.

• The first Montreal goal was really just the product of a one-two combination with Union players slow to react. Herbers and Carroll could have shown better anticipation after a backheel return pass to Jackson-Hamel. Tribbett slid over to help and probably didn't see Depuy over his back shoulder. Elliott was nowhere to be found.

• Sapong should have finished a golden scoring chance about five yards from goal in the 70th minute. He did get the second Union goal, which started with a short corner and continued with Carroll picking out Tribbett at Montreal's far post. Tribbett did really well to head the ball back across the net for an easy Sapong header.

Sapong from Tribbett and Carroll. 2-1 Union!

• The Union gave up a cheap equalizer in the 90th minute, which started with Gaddis losing the ball. A low cross into the box allowed Jackson-Hamel time and space to turn, and Tribbett ended up deflecting the ball into his own net.

We got our first look at the Union's week one opponent on Wednesday night.

Vancouver snagged a positive 1-1 draw at Red Bull Arena in the quarterfinals of the CONCACAF Champion's League, bringing an away goal back to British Columbia for next Thursday's second leg.

It was a mix of starters and some new faces for the Whitecaps, with Erik Hurtado leading the line instead of projected week one starter Fredy Montero. Rookie Jakob Nerwinski got the start at right back, with 16-year-old Alphonso Davies on the left side of the midfield.

Despite Red Bull holding the bulk of possession, the 'Caps opened the scoring in the second half with Kekuta Manneh redirecting an initial header off a corner kick. David Ousted saved a Sacha Kljestan penalty and Vancouver held on for the draw despite a 70th minute Cristian Techera red card.

Here's what Curtin said about the game:

"I watched it this morning. First time through, the obvious (takeaway) is that Vancouver has a ton of speed in wide areas. Manneh and Davies are a handful. Hurtado up top has some speed to get in behind. They looked to really break quickly on the counter. They'll look a little different at home. They'll probably have more possession. New York had a ton of the ball, but (Vancouver is) still so dangerous when they break. So we'll have to do a good job of eliminating counterattacks. You have to foul immediately when you make a mistake and turn the ball over, before they start running at your. Once they do they're tough to stop on the break."

See the highlights below:

Be there for the 2nd Leg at BC Place. Tickets: https://t.co/BoPxzd3Fm3#VWFC #SCCL pic.twitter.com/C0Nfp69Rfc

Newly signed draft pick Santi Moar scored a first-half brace, which was matched by academy forward Justin McMaster in the second half. Yosef Samuel, Seku Conneh, and Chris Nanco added the other goals.

The Steel roster, which had a lot of open spots a few weeks ago, looks to be filling out nicely. Nanco, it would appear, has signed the contract he was offered last week. Moar looks like a legitimate goal scorer and will solve a lot of problems the team had at the tail end of last season.

Check out our photo gallery from our match against @juniorlonestar!