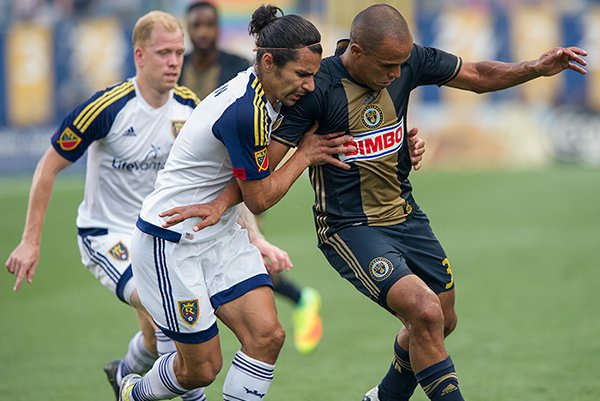 We're nine days away from the Philadelphia Union season opener, with just one more preseason hurdle to clear.

The Union wrap up the Suncoast Invitational tournament with a game against D.C. United on Saturday afternoon.

They'll fly home and resume training next week in Chester, where we'll once again have full access to the team ahead of the road trip to Vancouver.

There's a lot going on next week, with Union training in the mornings, a Bethlehem Steel friendly against Temple, and a Wednesday doubleheader at Talen Energy Stadium as part of the second annual She Believes Cup. England and France open the four-team tournament in a 4 p.m. game while the U.S. women take on Germany at 7 p.m.

There's not a ton to report otherwise. The Union did announce the signing of English right back Aaron Jones. That brings the roster to 29 players and leaves Jack Elliott as the only unsigned draft pick. Chris Nanco and Santi Moar signed with Bethlehem Steel.

"Something I've been working towards my whole life."

Union head coach Jim Curtin spoke with reporters via conference call Thursday and reflected on the 2-2 draw against Montreal earlier in the week.

He also spoke a bit about how the starting eleven is shaping up, plus the absences of a few key players.

Jim Curtin: "I would just say that Chris has a little bit of, from the collision from the Jamaica game if you remember back to that game in Chattanooga, he collided with Cory Burke. He has a bit of a rib issue there. That set him out a little bit. I'm not worried about it that much because he had sort of a three-week head start (with the national team) compared to our guys. He's a guy who knows his body very well. Fitness-wise, he's always in the weight room taking care of himself and he's done a lot of work on the side. He felt his hamstring tighten up, almost more like a cramp type of feeling that he had against Tampa and we wanted to be smart with it. Obviously, we'll look to push him now with the first group against D.C. United, but those are the little things that kept him out. Between the rib and the hamstring, and knowing his body as well as he does, we didn't want to push it against Montreal, then turn around quick against D.C."

On Alejandro Bedoya moving back to the number eight spot, from the number ten, in the second half:

Curtin: "The thinking was to push Derrick Jones for 45 hard minutes in the eight spot and get a good look at that, with him next to Haris, then having Ale do the running at the ten. Ale certainly did a lot of running at the ten and covered a lot of ground. We can always still work on our pressure and our cues from everybody could be a little sharper, but credit to (Montreal center backs) Laurent Ciman and Victor Cabrera, who both can pass and play balls through the line. It's not going to be those two every week in MLS, so it's good for our guys to solve problems on the fly and take that information and adjust. As the second half started, I wanted to see a good, hard 15 minutes from (the team). I put Roland Alberg at the ten, Ale at the eight, and Haris together in there. You do have more control of the ball, certainly. The position Ale wants to play is the position where Bruce Arena sees him at, and that's the eight. [He] and Haris obviously have a very good understanding, but we'll still have to do what's best, mobility-wise, taking into account everyone's health and fitness. There's almost two plans we need to be prepared for, and that's, 'do we need to be a little more defensive and have a ball winner there?' Or, do we want to try to control the tempo of the game through possession? We're still trying to find that balance right now. Between Warren Creavalle, Derrick Jones, and Maurice Edu, those are more of the ball-winner types. Ale is more of a guy who wants to get on the ball and control the tempo of the game. These are good problems and tough decisions to make."

Curtin on Derrick Jones: "He is in the discussion to be a starter on opening day for sure"

On Haris Medunjanin receiving the ball in various locations:

Curtin: "It's a bit of a balance. I think Montreal did a good job of pressing us when we received the ball. We weren't able to, in the first 45 minutes I'd say, to get into a rhythm. Naturally, the tendency would be to drop a little deeper. There are instances now, with the outside backs playing high, that if the center backs are split he can just drop in between them, or even to the right or the left of one of our center backs and pick up the ball to start the attack. Listen, our players are programmed now to get our best guys on the ball. That certainly would include Haris. He's a guy who can start the attack, even in a game where (the opposition) is instructed to make it hard on him. He still found a way, as the half went on, to play some of those through balls that are sort of clipped over the top that look simple, but he has a way of making them look simple."

On Richie Marquez being more vocal and assuming a leadership role:

Curtin: "Richie has been excellent. He's a guy that flys under the radar for us. His work rate, day in and day out at training, I don't ever have to question that. He'll never be a guy I have to have a conversation with. He is a real professional in that regard and his play has, in a quiet way, he's been one of our top performers this preseason. When I don't have to bring up his name much in film or talk about him a lot, that means he's doing his job. It's like an offensive lineman in football. When you don't hear their name called, it's a real positive. He's been excellent. He's been vocal back there. He's at a stage in his career now where he realizes he's a starter in MLS. He's a guy who I respect a great deal and he's a real competitor."

On the positional battle at left back:

Curtin: "Fabinho is the starter right now. Giliano (Wijnaldum) has adjusted and he's improving every day in training. The intensity has picked up and his reactions have improved. There is an acclimation (period) where you get used to the league and get used to how we train each and every day, and that's a normal process to go through. I think he will eventually push Fabi a little bit more, but right now Fabi is sharp and playing well in the preseason. He's in the starting role as of right now."