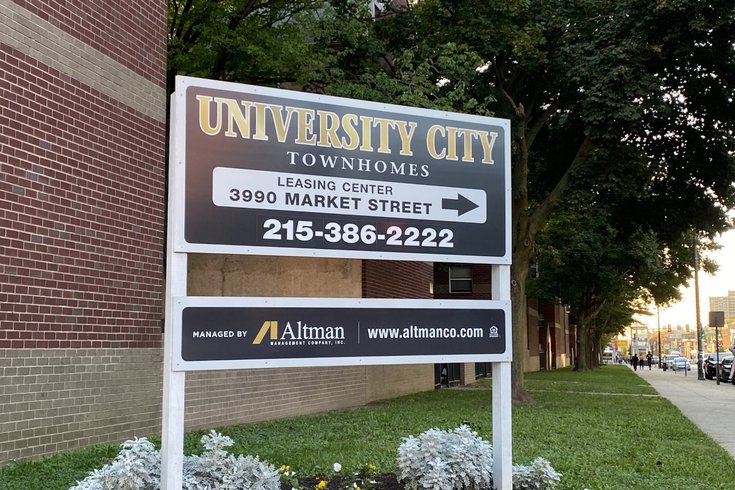 Residents at the University City Townhomes are set to be displaced in July, when the affordable housing complex's contract with HUD expires. City Council has passed legislation aiming to prevent their displacement.

The University City Townhomes sit near the edge of Drexel University's campus, surrounded by high-rises and an expanding student community.

Last summer, the property owner, IBID Associates, informed residents that it was allowing its affordable housing contract with the U.S. Department of Housing and Urban Development to expire this July. The property was intended to be sold, displacing residents.

On March 10, City Council passed a bill that aims to protect the residents from displacement by rezoning the area to require any redevelopment include at least 20% of its units at rates below market value. It also places a temporary demolition moratorium on the University City Townhomes.

But IBID Associates quickly filed a lawsuit against the city, as well as Councilmember Jamie Gauthier, who sponsored the legislation, telling WHYY that its "constitutional right to sell the property" were violated.

The bill, which passed by a 15-1 vote, awaits the signature of Mayor Jim Kenney. Officials from the Mayor's Office said Kenney is still reviewing the bill, though his signing "does not change the immediate situation on the ground."

The Mayor's Office said it hopes the developer will continue discussions with Councilmember Gauthier's Office and come to a resolution.

The bill would create an Affordable Housing Preservation Overlay District within the two blocks bordered by 39th Street to the east, Ludlow Street to the south, 40th street to the west and Filbert Street to the north. University City Townhomes sits within it at 3990 Market St..

A companion bill, which would expand the overlay district to other locations bordering the Market-Frankford Line, is awaiting a council hearing.

The overlay district sits in a West Philadelphia neighborhood that has been subject to gentrification. The University City Townhomes has provided affordable housing for nearly 40 years. Many of its residents have lived their for decades and may not be able to afford other homes in the neighborhood.

Gauthier said 300,000 affordable housing agreements are approaching their expiration dates nationwide, affecting 5,600 units in Philly. Of them, 670 are in the Third District, which she represents and includes much of University City.

"The way that affordable housing policy has been handled over the years reflects a grave injustice to our communities, and to low-income residents in particular," Gauthier said. "Our ultimate goal with this legislation is to support the public interest by making sure as much affordable housing remains in amenity-rich neighborhoods — which are experiencing immense commercial development pressures — as we possibly can."

'Penntrification' has displaced residents for decades

As noted in the bill, University City's history of displacement, particularly of Black and brown residents, dates back to the late 1940s. That's when a federal urban renewal program set its sights on eight "blighted" areas in Philadelphia, including two parts of West Philadelphia.

A decade later, the West Philadelphia Corporation was established to spur the creation of the University City Science Center within a redevelopment zone that mostly included the city's Black Bottom neighborhood.

As of the early 1960s, an estimated 3,432 people lived in Black Bottom, including 444 white families and 543 non-white families, according to the bill. In 1968, the use of eminent domain on behalf of the School District of Philadelphia, the Presbyterian University Medical Center and others displaced 2,653 residents, 78% of whom were Black.

In 1969, Penn students participated in a sit-in, seeking a housing system for families at risk of being displaced by the expansion of University City. The sit-in resulted in a commission created to address displacement, and included an agreement that required Penn to fund replacement housing for residents displaced by further expansion.

This fervor laid the foundation for the establishment of an affordable housing complex. With the support of the city, IBID Associates constructed the University City Townhomes in 1983 and entered a contract with HUD to provide affordable housing.

In a process dubbed "Penntrification," the University of Pennsylvania, Drexel and other real estate developers have continuously bought properties at the expense of many long-term residents in University City, pushing its boundary further into West Philadelphia.

"Over the past few decades, UPenn's continued westward expansion has driven up prices and increased demand for profitable land," state Rep. Rick Krajewski, who represents University City, said in October. This city, this university, this neighborhood cannot, once again, profit off the destruction of a community."

'I should not have to beg for housing'

Public hearings on the bill, held in October, brought out community members and advocates for the legacy of Black Bottom, West Philadelphia educators and people who support the sale of University City Townhomes.

Gerald S. Bolling, a member of the Black Bottom Tribe, an organization that honors the legacy of Black Bottom, urged council to protect affordable housing in the neighborhood. He said "white privilege" led to Black Bottom residents being displaced and that allowing the property to be sold for profit would be a replication of that decision.

Timothy Boyle, founding principal of the Science Leadership Academy Middle School in University City, said that 70 of the 154 HUD-contracted homes in Philadelphia are within the school's catchment zone.

Brett Altman, owner of Altman Management – which manages the Townhomes – opposed the bill, saying he had sought to work with Gauthier and Townhomes residents to establish a plan to include some affordable housing as part of a purchase agreement with an investor.

A spokesperson for IBID said that for months, the property owners and management have been working with a "mission-driven" developer who has said he is prepared to offer 70 affordable housing units on the site, with priority given to residents who have lived in the complex for years to return after relocation.

IBID says that the passage of the bill hinders the development of the property and the plans that have been in place between IBID, Altman Management, and the developers they have been working with to develop a non-legislative resolution to the conflict.

A representative from IBID also said that beyond the 70 units that would be included in the new development, the investor is prepared to work with HUD and the Philadelphia Housing Authority to build 100 more units of affordable housing in the amenity-rich neighborhood.

With the bill awaiting Kenney's signature, residents of the University City Townhomes are trying to decide what to do next. Prior to its passage, they rallied at City Hall to outline the demands of "Save The UC Townhomes," a resident-led advocacy group that is seeking assistance from the city to protect their housing.

The majority of the 70 households residing within the Townhomes have lived there for more than 30 years. Though the bill seeks to protect further displacement of low-income residents from the community, those who are currently living in the Townhomes are not directly impacted by the legislation. They are still expected to move out of the complex by July 8.

The group has demanded — above all — a permanent halt on demolition plans, rather than the one-year moratorium included as part of the legislation.

Further, Save the UC Townhomes has demanded a two-year extension of the current move-out date, housing maintenance and financial support for the families being displaced as a result of the expired contract. Residents have expressed concerns about the affordability of housing.

The group held a protest and block party on Saturday, March 19 to rally in support of the residents of the University City Townhomes. During the rally, the group again demanded a permanent stop to the demolition, as well as more time to determine their next steps.

"I am personally tired of the gentrification," said Rashida Alexander, a resident of the University City Townhomes. "I work with the homeless everyday, where they give out Section 8 vouchers knowing that (the people) have nowhere to go. I am a working citizen. I pay taxes to the city of Philadelphia. I should not have to beg for housing. That is a human right."