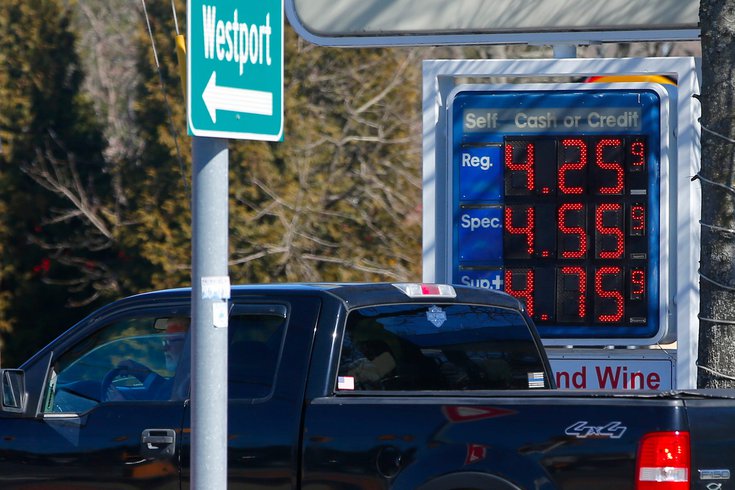 The U.S. ban on Russian oil imports prompted a tanker destined for Philadelphia to instead head to France. The ban is expected to increase gas prices throughout the U.S.

A ship with 1 million barrels of Russian crude oil originally destined for Philadelphia is headed toward France instead.

The Beijing Spirit was the first tanker carrying Russian oil to change destinations as a result of the new U.S. ban on Russian oil imports, David Wech, the chief economist at Vortexa – an energy analytics firm, told Bloomberg.

Though the ban has received bipartisan support, the move is expected to exacerbate the rise in gas prices, which has been felt by drivers in the Philadelphia area.

Gas prices have hit record-highs, with the average prices per gallon at $4.32 nationwide and at $4.44 in Pennsylvania, according to AAA's national gas prices map.

In Southeastern Pennsylvania, a gallon is going for $4.49, which is up from $3.92 one week ago. Prices are somewhat better in the South Jersey suburbs, where a gallon costs $4.31 on average, up from $3.69 last week.

Industry insiders – including Patrick DeHaan, an analyst at GasBuddy, an app that helps consumers find low prices – expect oil prices to continue rising well into 2022 as the conflict in Ukraine rages on.

"Nobody's going to be able to escape this, and it's going to be real bad and ugly for several months," he told 11 Alive, a television station based in Atlanta.

The tanker was chartered by Lukoil, Russia's second-largest gas producer. The company has franchised 230 fueling stations in the U.S., mostly in the Northeast, including dozens across the Philly area.

It's one of many Russian-linked brands some American consumers are boycotting in an effort to support Ukraine. But the U.S.-based owners of individual stations, many of whom don't support the invasion, say the boycott is hurting them, as well.

Many of these small-scale owners never chose to be associated with Lukoil in the first place, Sal Risalvato, the executive director of the New Jersey Gasoline, C-Store, Automotive Association, told the New York Times. Many originally owned Getty or Mobil stations, which were purchased by Lukoil in the early 2000s.

The Beijing Spirit was loaded up over the weekend at Murmansk, a port city in Northwest Russia located a few hours from its borders with Norway and Finland, and headed to Le Havre in France. The boat left Russia last Sunday and is expected to arrive in France this Sunday.