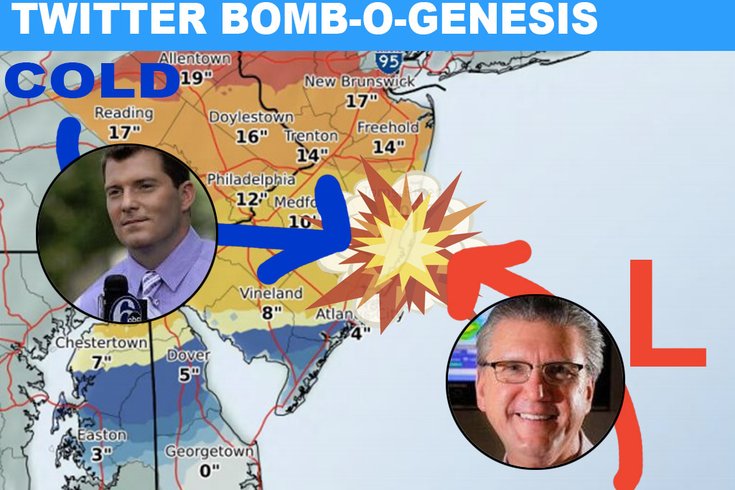 The wrath of winter is coming, which means meteorologists are busy trying to keep up with the latest weather models to determine the storm's potential impact. In today's digital world, it also means stressed-out weatherpersons' tempers can flare on social media.

Forecast: Snowfall amounts hiked for most of Philadelphia region

Obviously, the fields of sports, politics and entertainment are ripe for opportunities for people to lose their cool. But surely, meteorology is filled with professionals who stay above the fray, right?

While we can't be positive how much snow will fall, this week's impending nor'easter proved that meteorologists can let loose on Twitter, too.

On Monday, hours before the first snowflake will fall from the sky, Gary Szatkowski, a recently retired chief meteorologist for the National Weather Service, and 6ABC meteorologist Chris Sowers punched out some feisty tweets about the outlets' storm coverage.

NWS forecasters have been updating their projections about every 12 hours. Those forecasts have generally hovered around 8 to 12 inches in the Philly area. The latest release, provided at 5 a.m. on Monday, pinpointed the figure at 12 inches.

Sowers was critical of NWS' frequent updates about a potentially damaging storm:

@jerseyjohn43 Yes, but my confidence in the NWS is low. They have not been very good this winter

That didn't sit well with Szatkowski:

Chris Sowers 6abc still has a tweet up criticizing the NWS for updating their forecasts 🙄 We'll see how long that tweet lasts.

And off they went as observers went to get snacks:

Here's the back and forth:

@chris_sowers Wrong, it's based on forecaster judgment. And why did you delete the tweet calling NWS forecast maps wrong and misleading?

@chris_sowers Chris, this is all painfully obvious stuff you should have learned a long time ago.

@chris_sowers Perhaps if you attended an NWS media workshop, this would not be new information.

And with that Chris Sowers at 6abc, like Adam Joseph, has blocked me on Twitter. Those two don't take advice well.

At least Szatkowski and Sowers can agree on one thing. The weather is going to be bad for the next couple days.

This is my forecast for Tuesday morning! lol pic.twitter.com/kVW09N3bT4

Just remember to be careful out there, everyone. And try to be nice to each other on social media.