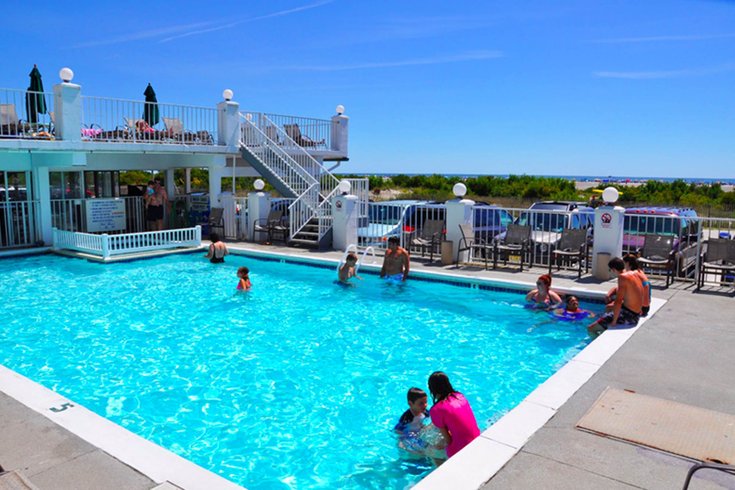 Diane Ranalli, who owns the Water's Edge Ocean Resort, says the week-long vacation is becoming a thing of the past. “Now I see the majority are three nights or four nights," she said. "I don’t think that people have the money. People do still want to take a vacation with their family but they can’t afford to take as long a stay, they can’t get off of work.”

The American vacation is endangered.

• Research has shown for years that both the number of people who receive paid vacations from their employers and the number of workers who are willing to take all of their vacation days are declining.

• The growing numbers of those who freelance or stitch together a living from a variety of sources may never feel able to truly take a vacation.

• The United States is also one of the only countries in the world, and the only advanced industrial nation, that does not mandate any paid vacation time.

To be sure, the trend's had an impact at Philadelphia’s vacation hot spot, the Jersey Shore.

“The stay has shortened,” says Larry Hirsch, owner of the Montreal Beach resort in Cape May. “Years ago they would stay for a week or 10 days, now it's usually three or four days.”

Patrons used to usually stay a week at a time, agrees the owner of the Water’s Edge Ocean Resort in Wildwood Crest.

“Now I see the majority are three nights or four nights,” says Diane Ranalli, who has been in the motel business since the 1980s. "I don’t think that people have the money. People do still want to take a vacation with their family, but they can’t afford to take as long a stay; they can’t get off of work.”

Hirsch and Ranalli’s experiences seem to track broader national trends. The U.S. Travel Association found that in the mid-1970s the average vacation lasted longer than a week. By the mid-1980s that dropped to five-and-a-half days and now, after the Great Recession, to less than four days.

This is not to say that the Jersey Shore is in any danger of being transformed into a howling void, devoid of skeeball and fried seafood of dubious quality. The Jersey Shore largely thrives by drawing visitors from greater New Jersey, Philadelphia and its suburbs and New York. According to research by Stockton University’s Lloyd D. Levenson Institute of Gaming, Hospitality and Tourism, New Jersey as a whole receives 27 percent of its tourist trips from daytrippers – who may not need to expend vacation days – in comparison with 19 percent in the rest of the Northeast. Only 21 percent of visitors to New Jersey stay for longer than five nights.

“In southern Jersey it’s the traditional weekend visitation and less impacted by vacation in that sense,” says Rummy Pandit, executive director of the Levenson Institute. “If your visitors are coming from close by, they will make more day trips or weekend trips, whereas if you are typically getting visitation from a distance, [tourists] will come for a longer period of time and vacation would come into play.”

From left, Claudine Beaulieu,  Janie Ouellet and Cybthia Bournival, all of Quebec City, climb on concrete beachballs before Memorial Day weekend in 2010, near the huge Wildwoods sign on the boardwalk. Quebec City is about 660 miles from Wildwood. (Mel Evans, File / AP)

At least one county, however, has bucked these trends – to an extent.

In Cape May County, 39 percent of visitors stay for seven days or longer. This is partly attributable to the large number of vacation homes in the county, which translates into a large number of weekly rental properties (which generated $1.9 billion in 2014).

But it is also the result of Cape May County’s large base of Canadian tourists, who are the fourth-largest population after visitors from New Jersey, Pennsylvania and New York. Canadians enjoy 10 days of paid vacation, but Cape May draws particularly from Quebec, which has its own tradition of the two-week construction holiday. In the early 1970s, the building trades unions and the government struck a deal to give an industry-wide vacation during the last two weeks of July.

The boon arrived just after Cape May County began extensive advertising campaigns in Quebec to lure travelers away from beaches in New England. In 1970, the year labor struck the construction holiday deal, Cape May became one of the first counties in America to open a tourism office in a foreign country. Although the Montreal office was closed in 1995, by then the tradition had solidified. In 2014 Canadian tourists represented 11 percent of the county's visitor base. (Maryland and Washington, D.C., by contrast, represented 6 percent).

“We are seeing second generation,” says Diane F. Wieland, director of the Cape May County Department of Tourism and Public Information. “A huge number of Canadians are renting homes or condos. We are seeing them in Wildwood and from Ocean City to Cape May. We are seeing more people coming from further north, the Quebec City area. Before it was mostly focused on the Montreal area.”

But 2015 could see a slight decline in tourism from the Québécois, as the return on the Canadian dollar has fallen to 82 cents after five years of parity with its American cousin.

“Last year was wonderful, but it’s not as strong this year because the dollar is such a big difference,” says Ranalli, the Water’s Edge Motel owner. “But I still have a lot of Canadians and they are here for seven nights or longer.”