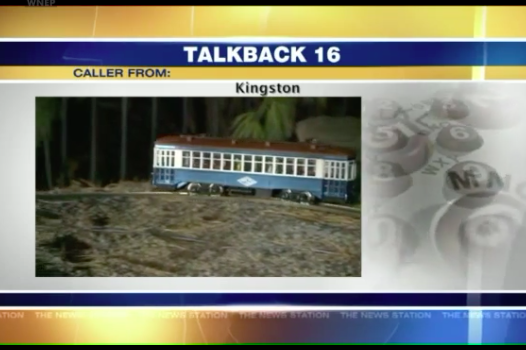 Local television news is generally most entertaining when it focuses less on the actual news and more on the broadcast itself and the on-air personalities, a fact those of us in Philadelphia are well aware of.

Case in point: WNEP in Scranton. The northeastern Pennsylvania station airs a daily segment called "Talkback," hosted by newscaster Jon Meyers, in which viewers call in and sound off on the issues of the day.

Topics can range from politics to crime to local community affairs. But the most consistent topic seems to be a little toy train chugging along in a circle in the backyard of the station's studio.

The quirky segment got picked up by HBO's "Last Week Tonight with John Oliver" this past Sunday, with the show playing some of the highlights of train hot takes on "Talkback." The best call — besides one viewer suggesting the station "blow up" the train — is someone pitching the idea of playing a half-hour broadcast of the train just to appease the audience. With the growing popularity of slow television, it's not a terrible idea.

In order to truly appreciate the segment, however, "Talkback" must be watched in raw form. Watch as calls transition from the shooting at a congressional baseball practice and an attempted murder to the train.

WNEP has naturally embraced the national attention, dubbing it "Talkback Fever." Can you feel it?