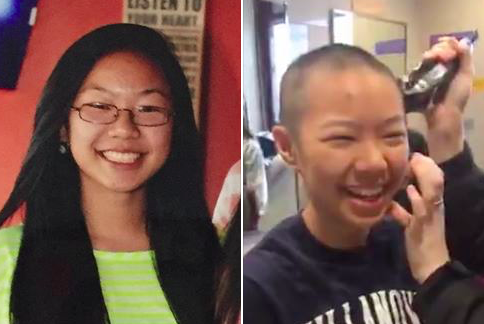 Before and after photos of Yvonne Nguyen, a Villanova University student who shaved her head to combat oppression.

Most people, if asked to define the term "hair privilege," might suppose it has something to do with the privilege of having hair on one's head instead of going bald.

That's too superficial for Yvonne Nguyen, a Villanova University student who decided earlier this year to shave her head as an act of social justice.

On St. Patrick's Day, Nguyen had a few friends help her get rid of her hair in order to take a stand against gender oppression and to acknowledge her own privileged place in American society. She posted a video of the incident on Facebook live to coincide with the annual St. Baldrick's Day celebration, when people shave their heads out of solidarity with childhood cancer patients.

"Over the past few years, I would cut my hair, but each time I was told by others that I didn’t look like a 'true girl' until my hair was long, straight and silky," Nguyen wrote last week in an op-ed for The Villanovan, the university's student-run newspaper. "Small and constant comments about how to play the role of my gender were burdensome. I never felt like I would be fully accepted for being my true self."

Nguyen went on to explain that shaving her head serves as a reminder of her "unearned access to resources" as a result of membership in advantaged social groups.

"Some of these privileges include food, water, shelter, safety, social support, freedom of speech, education and hair," Nguyen wrote.

Nguyen's Facebook timeline contains multiple videos from social justice events at Villanova, where she participates in the university's Service and Justice Experience. Her efforts include protesting Nike over sweatshop conditions in foreign manufacturing plants and supporting feminist causes.

Nguyen said she had wanted to shave her head for over two years prior to going ahead with it. Fear repeatedly stopped her until she was exposed to poverty and other instances of injustice.

"One must forgo some of their undeserved privileges to provide justice for others," Nguyen concluded op-ed. "Are you willing to shave?"