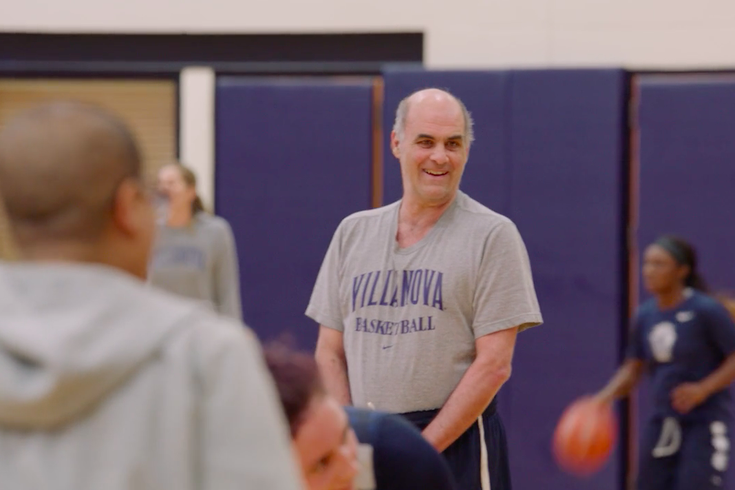 ESPN captured the moment when former Villanova basketball star Shelly Pennefather could hug her family and friends, including old teammates and coach Harry Perretta, after being sequestered for 25 years as a cloistered nun.

Friends, family and teammates of Villanova women's basketball star Shelly Pennefather gathered this past June for long-awaited embraces with the former athlete.

Twenty-five years of waiting, in fact.

The extended time between hugs was because Pennefather – the best women's player in Villanova's history – had stopped playing basketball professionally to become a nun and live a strictly cloistered life.

Pennefather starred as a forward for the Wildcats from 1983 to 1987. During her collegiate career on the Main Line she was named an All-America, won Wade Trophy as the best women's basketball players and was selected three times as the Big East player of the year.

Pennefather scored 2,408 points in in her Villanova career, still more than any player on the women's or men's team in the school's history. She would go on to play basketball professionally for three years in Japan before she made the binding decision to leave the game forever and commit her life to her faith.

In 1994, on the verge of making $200,000 annually to play basketball, Pennefather joined the Monastery of the Poor Clares in Alexandria, Virginia, an order of cloistered nuns who live by strict rules – the nuns do not to sleep for more than four hours at a time, are limited to one meal per day, do not wear shoes, have daily intense prayer, and be restricted from physical contact with others.

This year, on her first 25th anniversary at the monastery,  Pennefather, now Sister Rose Marie, was allowed to embrace with her loved ones, as she will be every 25th year.

"A Long Embrace" will air at 8 p.m. on Saturday on ESPN and ESPN.com. Watch a portion of the special report below.