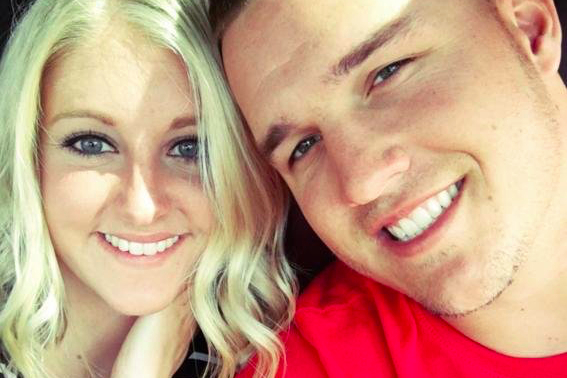 It's confirmed after he popped the question in skywriting.

The clues were present all along on Twitter for followers of the 2014 American League MVP.  Practically every time the Angels hit the road, Trout gleefully tacks on a handful of airplane emojis to let fans know the team's (probably obvious) mode of travel.

Sports Illustrated even provided a statistical analysis of the Angels' performance based on the number of airplane emojis Trout added prior to each 2015 trip. As of last October, the team went 71-60 when he included the emojis and 11-13 when he didn't.

That may have given the 24-year-old some extra confidence in his airborne proposal, which was accepted and celebrated on social media by fiancee Jessica Tara Cox. The two attended Millville Senior High School together, where Trout set the state home run record (18) and earned the nickname "The Millville Meteor."

Trout, as chance would have it, is also a bit of an amateur meteorologist, or "weather nerd," as Jim Cantore put it. In January, when Winter Storm Jonas barrelled through the Northeast U.S., Trout joined Cantore on The Weather Channel to provide a report on the storm.

Trout may be out in Anaheim most of the time, but he spends his offseasons in Millville and remains a diehard Eagles fan.

As for the cost of the big question, an average skywriting job costs about $8,500. Trout, arguably the best young player in the majors, is signed to a $144 million contract with the Angels through 2020. Half way through the 2016 season, he's batting a career-best .327 with 17 home runs for the struggling Angels.

Cheers to Trout and Cox on their engagement.