Is local rapper Vinnie Paz behind the viral 'I will fight any Irish person' post? 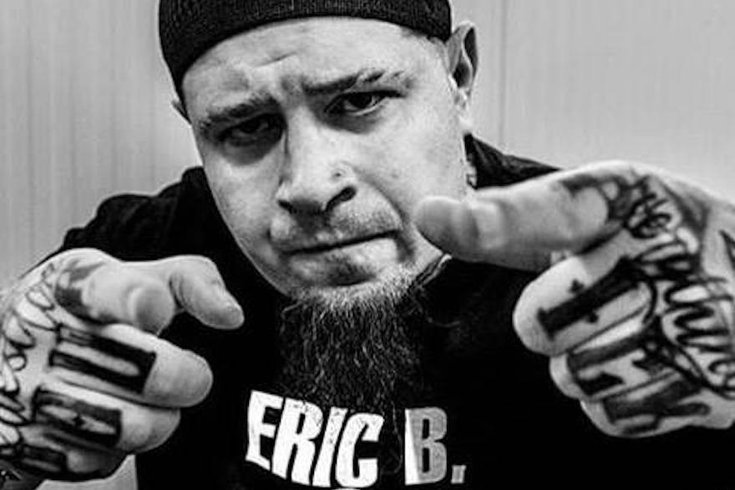 Local rapper Vinnie Paz shared a post of an apparent Craigslist post that saw an Italian from South Jersey offering to fight an Irish person outside a South Philly pizzeria.

Could the eternal turf war between Italians and the Irish be ramping up anew in South Philly?

Probably not, but if it does, a screengrab of what looks to be a Craigslist ad posted God knows when that is making the viral rounds would be the Assassination of Archduke Franz Ferdinand trigger moment.

We couldn’t immediately find the prospective pugilist behind the “I will fight any irish person – mm4mm (south philly)” post on the online classified-ad site, and that’s probably because the “Craigslist Personals” section disappeared last year.

Still it was a momentous challenge to an ethnicity – from a “single, athletic 5’4” Sicilian born and raised in South Jersey” – that should not be lost to the churn of viral-post insta-history.

What was the apparent inspiration? Well, sparkplug said he was “trying to prove that Italians are better than the Irish.”

The foe he sought – we know not whether the bout was ever commissioned – had to be from South Philly and willing to meet outside Lorenzo’s Pizza at 9th and Christian streets.

There was a trio of ground rules: shirts optional, last name starting with “Mc” preferred, and no weapons.

For his part, Keith Vellios, the owner of the pizzeria, said that no such fight has occurred in the area, but he has heard a lot about it in recent days.

"My phone has been blowing up," he told PhillyVoice. "But we hadn't really heard anything about it until the past day or so."

We had but one clue to go on in an attempt to find the original poster. The name on the screengrab was “boxcutterpazzy.” 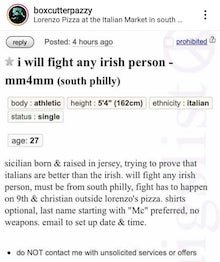 That is also the Instagram handle of one Vinnie Paz, the 41-year-old Sicilian-American rapper and founder of Jedi Mind Tricks. (Here's the track “Blood on My Hands” from his solo album “The Pain Collector.”)

With that background, you might assume it could’ve been the work of Paz, aka Vincenzo Luvierni.

Upon seeing the post, PhillyVoice reached out to Paz to see if he was the jedi mind behind the viral post.

He kindly got back with us via Instagram message to set the record straight.

“Haha,” responded the man who wasn’t born in South Jersey and isn't in his late 20s. “Nah. Everyone think it’s me, but I reposted it because I thought it was amazing.”

Amazing, it definitely was.

His denial, however, brings us no closer to finding the street fighter. If you are, or know, who it was, by all means, drop a line.

Though my name is as Irish as it gets, I’m not looking for a fight, but I’d totally watch this battle for South Philly bragging rights should it ever come to fruition.