Wade into the Philadelphia Flower Show with this splashy preview party 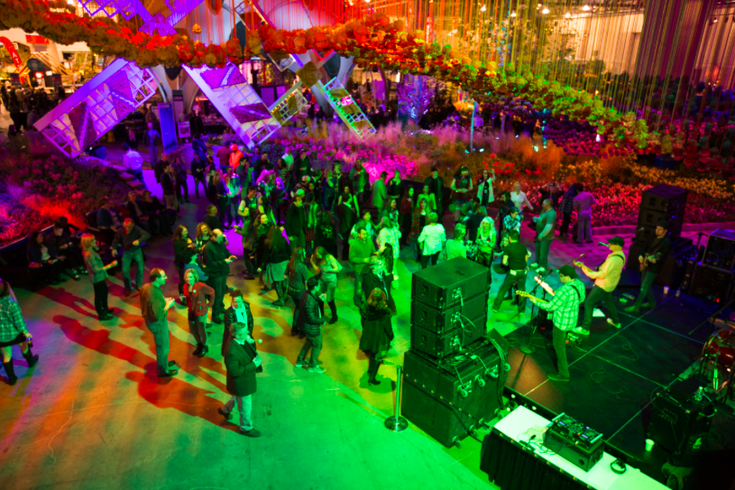 Courtesy of Kevin Feeley /for PhillyVoice

When it comes to the Pennsylvania Horticultural Society (PHS) and its annual Philadelphia Flower Show, there’s no shortage of fresh ideas; not for its 10-day event – March 3 through 11 – at the Pennsylvania Convention Center or its members' preview party held for one night only – tonight.

PHS may concern itself primarily with beautification and conservation, but they also know how to throw a party and hold a convention. This year’s “Wonders of Water”-themed exhibition and its famed “Entrance Garden” – a contemporary take on a rainforest and its waterfalls – promises to amaze.

“My team handles all events throughout the year, and a major chunk of our time and energy is dedicated to the Flower Show and keeping each convention special. We plan far in advance. I even know what we have booked up until 2022.”

He won’t give up the full schedule of events, but does state that the 2019 show is dedicated to “Flower Power,” the anniversary of Woodstock, and the FTD World Cup of Flowers, a global competition for floral designers.

Lemheney claims such advance planning, high standards and curatorial dynamism is necessary to appeal to serious gardeners and horticulturalists of the world, as well as the general public (a conservative number of yearly attendees being 250,000).

“We have such broad, yet specific appeal so that we can maintain the PHS and support beautification and host greening programs all year long.”

To best interpret themes such as water and its need for (and show of) conservation and care, Lemheney claims that he must give attending guests what they expect as well as elements they could never expect.

“Take what we did last year with Holland,” said the PHS’ events chief.

“Sure, we had tulips, but then we also had this magnificent eco-dome which was completely out of left field.”

How does all this relate to water? Much of what Lemheney and his team did was connected to both the serious conservation of water and its horticultural and worldly concerns. All this while maintaining the fun of it, a la the Flower Show’s puddles, fountains and waterfalls. The “Entrance Garden,” in particular, had to be a “wow” in Lemheney’s estimation: a 25-foot-tall waterfall with a dramatic rain curtain and misting pools all lined in tropical flora with scaffolding of bamboo and oxidized industrial steel.

“It’s going to bring the plants to the visitor with just as much coming from overhead as it will, side-to-side,” he said.

“It’s going to have a jungle feel, only modernized.”

Along with a cool entrance, the PHS chief gathered information on the role that plants play in conserving, protecting and filtering water.

“The best natural filtration system for water is the rainforest itself, as its different layers, textures and varieties of leaves perform various tasks essential to protecting and cleaning the water every single day.”

Beyond that showy entrance, Lemheney promises perennials and trees native to our area that have adapted to their roles as filters (“the river birch and willow trees do that job”), and a Ted Talk-like March 7 session with a NASA astronaut, river experts and botanists discussing water as a finite resource and how rivers such as the Delaware provide life for the Philadelphia, New Jersey and New York City areas.

“Water is life – serious stuff, but fun too,” he said.

None of the fun happens without a pre-Flower Show party on March 2. That’s where Janine Scaff, PHS’s Chief Development Officer, comes in.

“All 1,200 attendees get to see everything at its newest, boldest and freshest. As long as the Flower Show is spectacular – and it is just by virtue of that magnificent waterfall-rainforest alone – the preview party will be too," she said.

Yes, Scaff has planned cool details to go with the grandeur of the Flower Show’s exhibits, such as water-based desserts and party favors. But for Scaff and PHS, the preview party is a thing unto itself.

“It’s been that way since the party started in 1966 – a must-be, must-see event known the world over.”