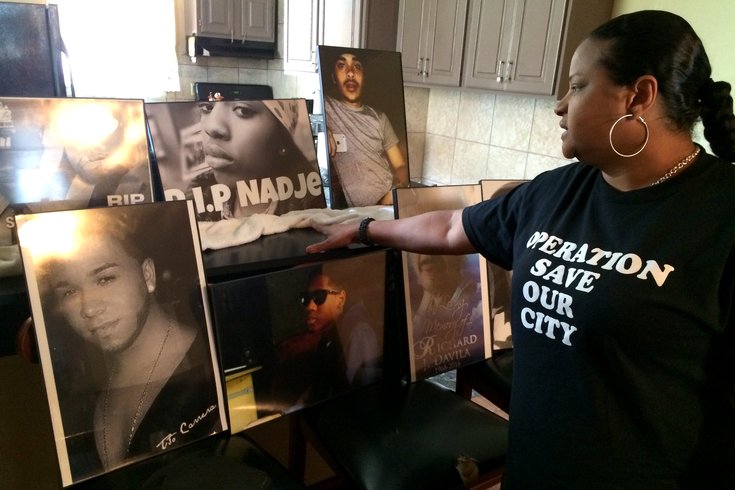 'Operation Save Our City' founder Rosalind Pichardo of Kensington displays photos of homicide victims for whom she is seeking justice.

Rosalind Pichardo started her organization, Operation Save Our City, after he brother was murdered four years ago.

The organization works with families of murder victims, helping them to cope with their loss, while working to bring the individuals responsible for the crimes to justice.

However, in a recent interview, Pichardo said, she should have started the group much earlier.

That's because, the 38-year-old Kensington resident said, when she was 16, her boyfriend was killed in a horrific attack – one she barely survived herself.

It was then when her ex-boyfriend Donald E. Williams Jr. learned she had begun dating a new guy, and Williams tracked Pichardo down. When he found her, Pichardo said Williams beat her and threw her off of a concrete overpass at Eighth and Erie streets in Kensington onto railroad tracks below.

Recalling the story during a recent interview, Pichardo said she climbed to her feet and began running for help, while Williams, still on the overpass above, chased after her.

"When I get information, I go to where their family lives and I put it out there ... I don't want them to think that we are scared." – Rosalind Pichardo, founder of Operation Save Our City

"He wasn't able to catch me," she said with a wry grin.

Pichardo escaped and found help from a resident in a nearby house. The man was just about to call for help when Williams showed up outside with a gun and began firing into the home.

"He shot through the door, and he almost hit the guy," she said.

While she hid, the good Samaritan called the police, but, Pichardo said, Williams didn't wait around. Instead, he went to Pichardo's mother's house where Pichardo's new boyfriend, Travor Jackson, was waiting for her to return home.

Williams killed Jackson that day, and he was arrested shortly thereafter.

"And, he did hardly any time," Pichardo said.

After being released from state prison in 2009, Williams began dating a woman named Maria Serrano, according to Pichardo. In 2013, Williams raped and murdered Serrano. He was sentenced to life in prison.

This was just one moment of tragedy in Pichardo's life.

The motivating factor for her to create Operation Save Our City – a group that works with families of murdered individuals to help them grieve and process their loss while also working to help catch the individuals responsible for the slayings – was the murder of her 22-year-old brother.

Pichardo's brother, Alexander Martinez, was shot and killed on Jan. 9, 2012, while he walked along the 3500 block of Hutchinson Street in North Philadelphia. Pichardo said he and her 16-year-old nephew were walking to get Chinese food when they were ambushed by two men who robbed them. When they pointed a gun at her nephew, Pichardo said, her brother moved to protect him.

That's when Martinez was shot.

Surveillance cameras caught footage of the suspects in the still-unsolved murder and police shared the video in hopes of making an arrest.

Pichardo's family struggled to deal with the sudden loss. Her father, she said, probably suffered the most. Previously a mild-mannered man, she said Martinez's death made her father paranoid and angry. Her father talked about wanting to go to sleep and not wake up because of how much he missed his son.

That's exactly what he did – about a year after Martinez's death, her father died in his sleep.

"When they killed my brother, he became a different person. He would say things he wouldn't normally say," she said. "It was like this rage would take over him."

After seeing how the loss of her brother impacted her family, Pichardo said, she was motivated to create a service that could keep other families from going through a similar situation. She said she wanted to be able to help families control their grief, while working to seek justice for the murdered individual.

It's a job that isn't easy, she said, especially in communities where "stop snitching" is an unspoken rule. 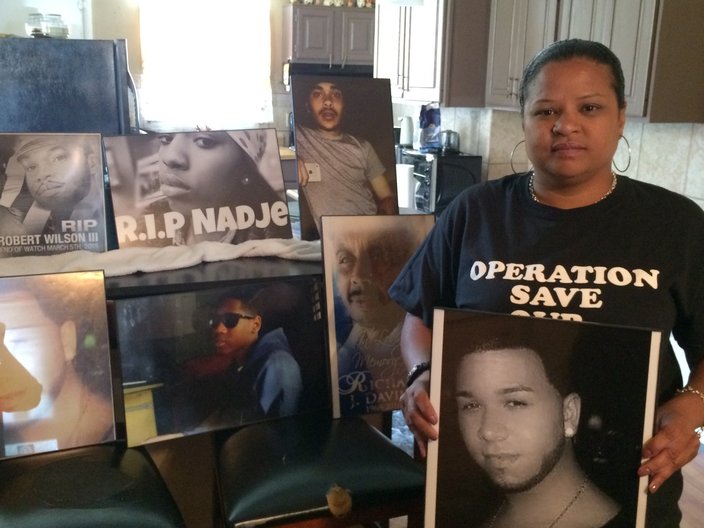 Rosalind Pichardo holds an image of her brother, Alexander Martinez, who was killed in January 2012.

Because of this, Pichardo said, sometimes people don't want to talk to police. Sometimes, she said, the murderer could be the victim's best friend or they might live just down the street, and the victims' families are afraid of retaliation.

In fact, Pichardo said, when Operation Save Our City holds vigils for those killed, often at the same sites where someone was murdered, many times, the killer shows up.

"I'm dealing with whether the criminal is actually out there, and most of the time, they are," Pichardo said.

As an example, Pichardo recalled the March 2014 murder of 17-year-old Antonio Flores, who was killed by Sergio Santiago, 22, a man described to have been like a brother to the victim. Santiago pleaded guilty to third-degree murder in August 2015 and was sentenced to 15-30 years in prison.

There are more homicides that occur between individuals who've known each other for a long time than many realize, she said.

"People from outside the city don't know what happens in the inner city," she said. "They see a murder happen and then bam, it's on to the next thing."

Old feuds can develop into violence, she said, and incidents can build so that one attack leads to more. Even a minor slight can result in retaliation, which then leads to further retaliation and the stakes keep getting higher.

It's a cycle that she said can be hard to break. It's even harder to break, if no one's talking to police.

"A lot of the time, the community knows who did it, but they don't want to talk about it," she said.

In communities that don't cooperate with police, Pichardo said, even when the police do name a suspect, a suspect's family will hide a wanted individual.

"The families are the ones hiding these people," she said. "No one wants to sit and think, 'Oh, not my son,' But, you know when he has extra money, and you don't know where it's coming from. You know what your son keeps in the mattress. You know when it's time to flip mattresses."

Pichardo tries to break that cycle with Operation Save Our City by sharing wanted posters for individuals sought in homicide cases — especially after the story has dropped the news headlines.

If the police have an arrest warrant out, Pichardo said, she will even go to homes of family members of the wanted individual — to leave wanted posters in their mailboxes — to let the family know that the community wants a suspected killer off the streets.

"When I get information, I go to where their family lives and I put it out there," she said. "I don't want them to think that we are scared."

Pichardo said she also works closely with families – who mostly contact her through her very active Facebook page – to help them deal with the grief that follows a tragic incident.

It's a job, she said, for which she has been prepared for by her own past.

"I know that this is hard to do, but it has to be done," she said. "I don't have a degree in what I do. But, I do it, because I have exposure. This is a topic that needs to be talked about, and it can be emotionally draining."

When an individual is murdered, Pichardo said, it impacts the entire community. She works with families, letting them know that "if you don't be the voice of your loved one, nobody else will," and helping them mourn. And, while she noted that there are city services available to grieving families, she works within the community,  trying to heal the wounds left by violence.

"Most victim services don't do what I do," she said. "I go into houses. I can sit all day with them. We talk, we cry ... You've got to try to keep that family together."

Pichardo recently has been meeting the family of Anthony Molina. He was shot and killed on April 22, after stepping out of his car on the 8400 block of Lindbergh Boulevard in Southwest Philadelphia. Molina's family said Anthony was shot by a masked man who waited behind his car until he exited, shooting him several times until he dropped, then shooting him again as he lay on the ground. 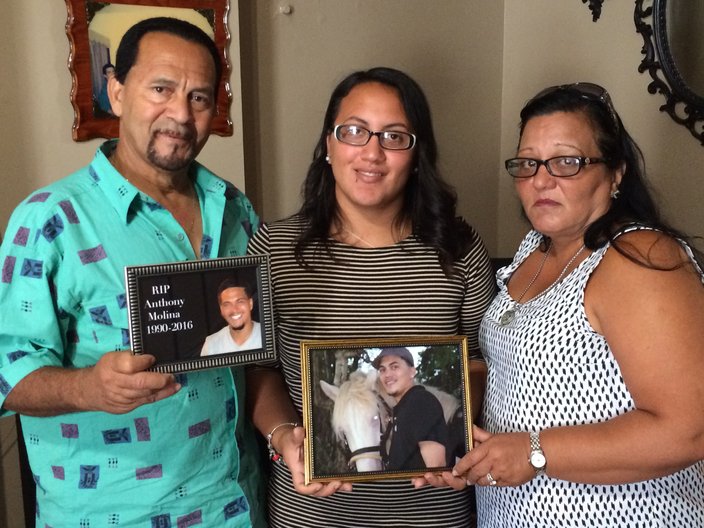 Osvanaldo and Shanna Molina and Zulma Guzman - respectively the father, sister and mother of Anthony Molina - share an image of their loved one who was killed in April.

The homicide remains unsolved. Molina's fiancé was the only witness, and no cameras recorded the shooting.

Because of the circumstances around his death – that Molina wasn't robbed by his killer and it seemed the gunman knew Molina's car and lied-in-wait for him – Molina's family believes they know who the killer might be.

"I think he lives in the area," said Shanna Molina, the victim's sister. "He obviously knew who it was because he was standing behind my brother's car."

The family believes the shooting could be an act of revenge by someone connected to Molina’s 2013 armed robbery arrest, for which Molina was sentenced to house arrest.

Molina's father, Osvanaldo Molina, of Port Richmond, said his son was a former car salesman and chef at The Cheesecake Factory, who had struggled with prescription pill addiction after a car crash, the father said. The addiction led Anthony Molina to make some bad decisions, he said.

"He didn't have time to be out on these streets," Osvanaldo Molina said.

"My brother was outgoing. A very happy person. He was full of the energy of life," Shanna Molina said.

They told their theory to police, but Shanna Molina said the officers investigating the case said that since the killer was masked and the robbery conviction was three years prior, it was unlikely the same individual.

"Even if it doesn't make sense, we are still looking," Shanna said. "This is the only thing we can cling to because we want justice."

How did Pichardo step in to support Molina's family? Molina's father said after Anthony Molina was killed, he was so distraught, he took down every photo they had of his son.

It hurt too much to look at them.

But, by talking with Pichardo and coming out to some of Operation Save Our City's events, Molina's family said they are moving step-by-step past the pain and anger and trying to cope with losing their loved one.

"Everything is still fresh, but she's been really helpful," Shanna said. "She's been putting my brother's photo out on Facebook, and it really helps out a lot."

Last weekend families participated in a peace walk organized by Operation Save Our City. The event served the dual purpose of calling for an end to gun violence, while acting as a memorial for those who have died at the end of a gun barrel.

"We felt united because there are people out there who want justice just at much as we do," Shanna said.

Moving forward, Pichardo said she intends to continue holding vigils, peace walks and share posters of victim and suspects, in order to help families fight back against gun violence in Kensington and beyond.

"If families want these cases solved, they have to be in front if it," Pichardo said.