Walking the (picket) line on Day 2 with striking SEPTA workers 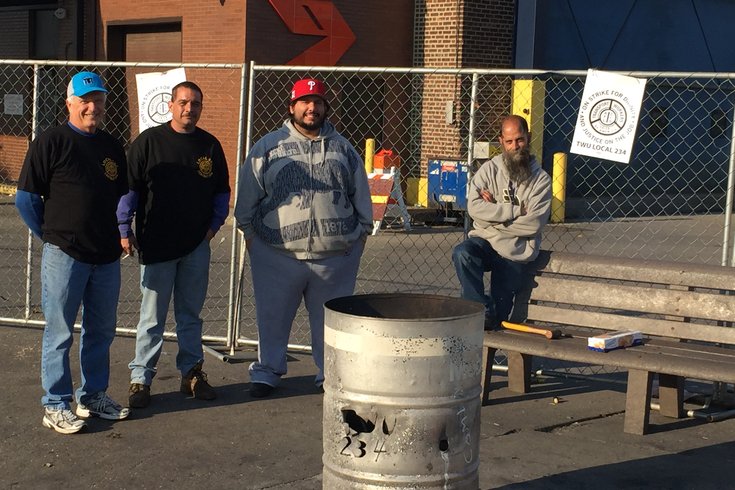 Transit workers on strike at the Frankford Transportation Center, from left to right, Dave Laich, 44, of Langhorne; Mike, 48, of New Jersey; Jesse, 31, of Philadelphia; and Mike, 50, of Philadelphia.

As the transit strike entered its second day, members of the Transport Workers Union Local 234 huddled around a barrel on Wednesday morning, stoking flames of the fire keeping them warm.

About 30 to 40 striking workers, both drivers and maintenance workers, gathered near Bustleton Avenue and Penn Street, not far from the Frankford Transportation Center, wearing signs calling for "dignity and justice on the job." Meanwhile thousands of commuters across the region dealt with the consequences of life without SEPTA bus, trolley and subway service.

"For the riders, I feel bad, I really do," said Frank Byrne, 44, who lives in New Jersey. "I've got about 30 people who are my regulars. I see them every day. For my regulars and the public, we know that they are struggling to get to work and it's not that we don't care."

The striking workers were happy to discuss their grievances, including working long hours without respite, pension plans that are capped for union workers but not management and escalating health care costs.

According to PlanPhilly's Jim Saska, under SEPTA's proposal, employees would pay $352 more per month for health care.

For newer employees, union members said Tuesday, a real point of contention is, what they call, "slate shifts." With these types of shifts, a driver might not know their schedule from one day to the next. As a result, drivers can be required to work late, and then be asked to come back in for a morning shift with inadequate time to rest.

In fact, they said, in many cases SEPTA will only permit drivers to have nine hours off between shifts, leaving little time to get a good night's sleep, let alone prepare a meal or spend time with their families.

Also problematic are "swing shifts," where a driver is asked to get behind the wheel several times throughout 12- or 14-hour-long days. On these days, striking workers said, drivers could be asked to be on the clock for an hour or two, then off, then back on – repeatedly throughout the day. 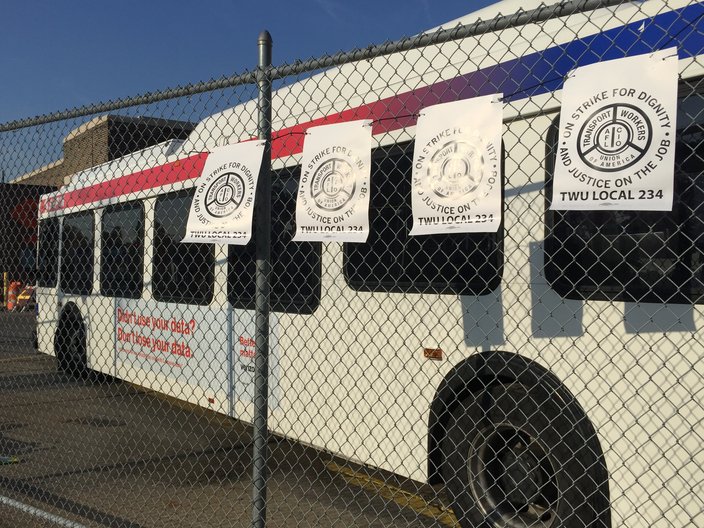 A SEPTA bus behind a fence covered in signs supporting the transit workers union's strike at the intersection of Bustleton Avenue and Penn Street.

"It's a long day even if you have a break," said Ernie Freedman, 63, of Northeast Philly. "And then, you're only getting paid for eight or nine hours."

The driver fatigue that results from such working conditions, many said, is a real problem, not just for SEPTA and its riders, but for everyone on city streets.

Compounding the problem is the lack of time between runs, according to Victor Costia, 40, of Mayfair, a bus driver. On one long run he takes regularly, Costia said the route takes about an hour-and-a half to complete and he gets only five minutes at each end of the route before he needs to turn around and run it again.

It leaves no time for drivers to stretch their legs or take needed bathroom breaks.

"What happens is that you can start operating unsafely," he said. 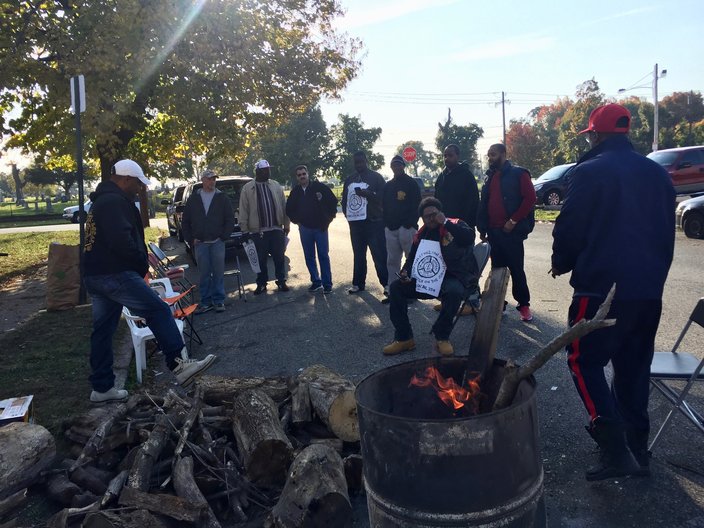 Members of the Transit Workers Union Local 234 huddle around a bonfire during the morning of the workers' second day of an ongoing strike.

All sorts of things can happen en route – riders needing assistance to board or taking too long to pay their fares –to make a bus late, in which cases drivers surrender their five-minute break in an effort to catch up to the schedule, he said.

"We are starting to just operate as a robot," he said.

Costia, who has been driving for SEPTA for eight years, said he'd like to see the union come away from the negotiating table with 15-minute breaks between runs to help keep drivers fresh.

For many walking the picket line on Tuesday morning, however, the strike comes down to dollars and cents. More senior drivers said that, at a point, contributions to members' pension plans are capped. At $50,000, pension plan contributions are capped, but Byrne said that many senior union members make more than that a year.

"Between managers and workers, it isn't a level playing field," said Byrne.

A mechanic for SEPTA for 34 years, Laich said there has been no increase in contributions to employee pensions in seven years.

With negotiations expected to continue Wednesday, picketers at the Frankford Transportation Center said they just want the strike to end and get back to work, a sentiment shared by SEPTA riders.

Striking workers, they reminded, are not paid and do not have access to their healthcare benefits.

"We don't want to be out here," said Brian Marshall, 55, of Holland, Bucks County. "People think we are being greedy, but really, we are just fighting to keep what we have."