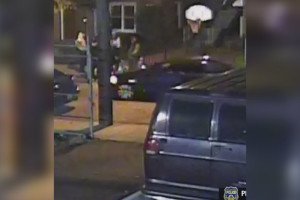 Police are seeking help finding the suspects in this dark colored sedan that, law enforcement officials say, was involved in a drive-by shooting that injured a 13-year-old boy and a 20-year-old man.

Philadelphia police are looking for the actors involved in a Tuesday evening drive-by shooting that injured two people, including a 13-year-old boy, in the city's Tioga neighborhood.

Police said Thursday that officers are hoping to identify the suspect, who was in a dark-colored sedan with tinted windows and pulled alongside the victims before firing at least eight times at them.

According to police, both victims, a 20-year-old man and a 13-year-old boy, were standing on the sidewalk on the 3500 block of N. 18th St. when the vehicle, traveling north on 18th Street, approached and began firing multiple times.

After evaluating ballistic evidence at the scene, police said they believe the weapon that was used was a 9 mm handgun.

Tips can be sent anonymously to police here.