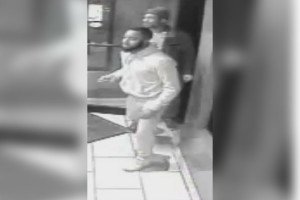 Philadelphia police are seeking three suspects after a man was assaulted in the city's Logan neighborhood over the weekend.

A 29-year-old man was stabbed, spit on and beaten with his own belt inside a Chinese restaurant in the Logan section by three alleged assailants on Saturday morning, Philadelphia police said.

The incident was recorded by the restaurant's surveillance cameras, and the video was released by police to the public Monday.

The footage, recorded at 11:40 a.m. Saturday, shows the victim being forced inside Lucky Garden Chinese Food at 4901 N. Broad St. and then being thrown to the floor by three alleged attackers.

(WARNING: The video below contains graphic and violent content.)

Police said the video then shows the victim being hit and stabbed in the torso and neck before his watch and belt are taken.

Three suspects then fled the area in an unknown direction in a gray Pontiac Grand Prix with the Pennsylvania tag# JZN-9752, according to police.

The victim was transported to Albert Einstein Medical Center, where he was treated for multiple stab wounds and was listed in critical condition, police said.

All three suspects are in their early to mid-20s, according to police. Police said the suspect who was allegedly holding the knife was wearing a gray Polo sweatsuit during the incident.

Another suspect is described as having a small Afro and wearing a blue, zip-up, flight-style jacket. The third suspect has a light beard and was wearing a ski cap and a brown coat during the incident, police said.