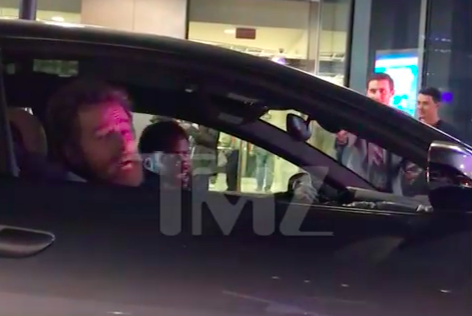 Over the past month, rubberneckers in Philadelphia have spotted actors Bryan Cranston and Kevin Hart driving a Ferrari around town to film for the upcoming adaptation "Untouchable," a remake of the 2011 French comedy that centers on a wealthy disabled man who hires an ex-convict to be his caretaker.

While film crews have temporarily shut down parts of Center City, getting a good look at Hart and Cranston hasn't been easy. That's where you can always entrust the dirty work to TMZ, whose team has a sixth sense (or something) for such opportune moments.

On Monday, the gossip site uploaded a video of an encounter with the duo as they drove around the city. We already know Hart will joke about anything. Cranston, whose turns as Hal Wilkerson and Walter White make his deadpanning harder to read in real life, decided to join in on his co-star's fun with the TMZ crew.

A release date for the film has not yet been confirmed.