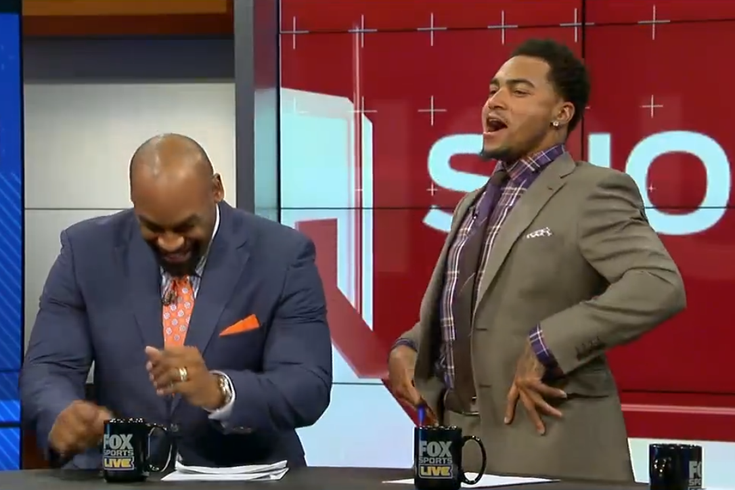 On Tuesday night, former Eagles wideout - and current Eagle killer - DeSean Jaccson [sic] dropped by the set of "FOX Sports Live" to impart his wisdom on the NFL, the draft and, of course, former teammate Donovan McNabb, one of the show's co-hosts.

Perhaps the highlight of the show came in its final seconds, when DeSean began poking fun at McNabb's waistline after co-host Charissa Thompson asked what his plans for the offseason are.

"Home, man. California weather," Jackson said. "Hope fully the weather heats up a little bit. I'm gonna chill out for the next couple of weeks. Then I gotta get on my workout. Gotta lose some of this weight. I'm getting big like him [pointing to McNabb]."

"Gotta get rid of the tummy," Jackson said while laughing and rubbing his gut. 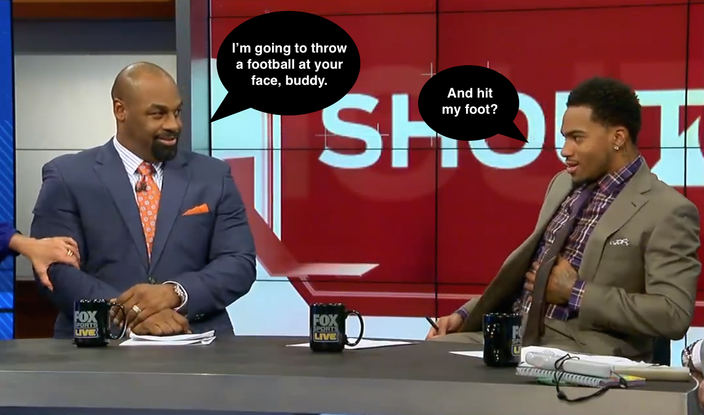 Thompson, who said she goes to the same gym as McNabb, then showed the world her impression of No. 5's patented strut.

Jackson recognized it immediately, and stood up and joined in the fun. It was pretty glorious.

[Click here to watch the video of DeSean mocking McNabb]

Making fun of his old quarterback wasn't the sole reason for DJacc's appearance on the show. He also sat down with McNabb for a segment called "3 Questions."

Jackson also played a game of "Would You Rather?" while on the show, but I think it's slightly different than the version of the game you remember.