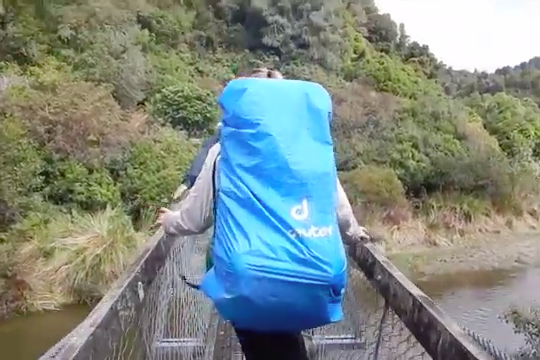 Four French hikers are lucky to be alive after tempting the fate of a rickety suspension bridge over New Zealand's Lake Waikaremoana.

In a YouTube video posted earlier this week, the four hikers are seen crossing the sort of bridge found in cartoons, movies and video games, where one false step causes a harrowing collapse (but then a train or a truck with a haystack passes directly below and it all works out).

In this case, the hikers were crossing the Hopu Ruahine bridge 30 feet above the lake when a cable snapped and they tumbled over the side into the water. The bridge was built to hold up to 10 people, but tilted and tossed three of the four hikers over the edge. The fourth hiker explained that he held pulled himself along the remaining cable to the other side

Even if the fall itself was manageable, they're all lucky they didn't have heart attacks on the spot.

An investigation by the New Zealand Department of Conservation and Tuhoe found that a rare manufacturing defect in the link of the cable caused it to snap. None of the 9 other bridges over the lake used links from the same batch, investigators found.

The bridge is currently in the process of being reconstructed and will undergo load tests before it is reopened to hikers.