Meek talked about his experience with the U.S. prison system with Michael Smerconish 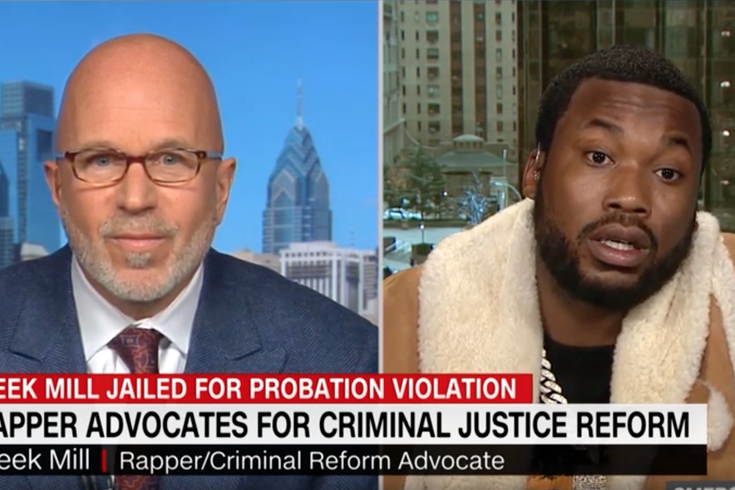 Meek Mill made a lengthy appearance on Michael Smerconish’s CNN show Saturday morning. The two talked about Mill's thoughts on criminal justice reform, his new album “Championships”, and his upbringing in North Philly.

Here are a few notable excerpts:

On the criminal justice system:

"I spent time with men who had 28 months in prison for $100 bail. They weren’t even found guilty for their crimes, but $100 kept them in prison. The taxpayers had to pay money to keep guys like this in prison, and it was for a petty crime. Things like that never made sense to me."

On butting heads with an African-American judge:

"You can be white and come where I come from, born in these conditions, and still get caught up in the same design."

"I had dreams my whole life of having a Jay-Z verse, being able to rap with Jay-Z, who I consider the greatest of all-time, so whatever he did I was going to accept."

On his run-ins with police when he was younger:

Mill: "If you grew up in my neighborhood and saw murder seven days a week, I think you’d probably carry a gun yourself. Would you?"

Smerconish: "Yeah, I probably would."

On people who think he’s the wrong face for criminal justice reform:

"I don’t see how people could say I shouldn’t be the face of it. I was wrongly accused, I was sent to jail multiple times for not even committing crimes, I’ve been sent to jail at least two or three times for being addicted to Percocet, and never was sent to rehab.

"If probation can stalk me down and bring me back to a state penitentiary without committing crimes, what could it do to these other kids who are trapped in these environments, surrounded by crime and violence? They don’t stand a chance."