WATCH: Meet the man behind the Eagles mask

He's only on camera for three seconds, but The Real Black Eagle left an impression on Philly 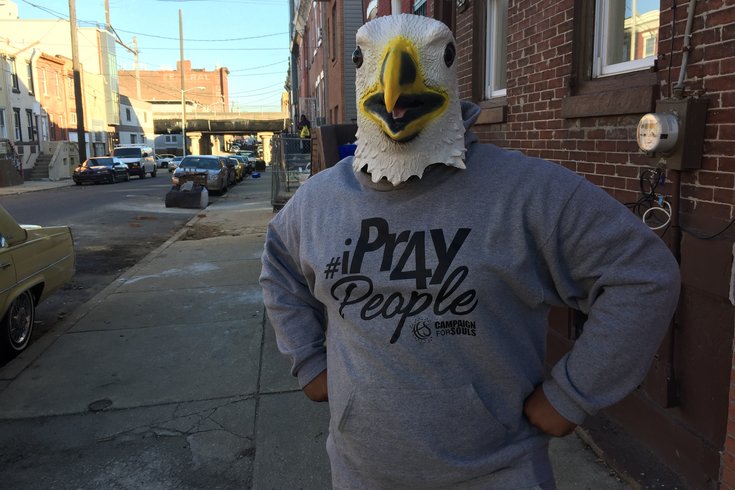 Nyseem Porter of South Philadelphia became a symbol of Eagles fans celebrating the NFC Championship game win over the Minnesota Vikings, courtesy of a three-second video that went viral from South Broad Street.

Our world is often defined by its razor-thin margins, particularly when it comes to sports and fandom.

If the Eagles sulked when Carson Wentz got hurt, maybe they don't beat the Los Angeles Rams that one Sunday.

Then, maybe they don't secure home-field advantage throughout the playoffs.

Then, maybe they don't even reach the NFC Championship game.

Even if they did, maybe Patrick Robinson's pick-6 never happens, the game doesn't turn rout, and there's no party on Broad Street last Sunday.

They did. There was. So let's take it out another step.

What if "The Real Black Eagle" hadn't been "an Eagles fan since conception"?

And the dog mask he wanted 18 years or so later hadn't been sold out.

What would've happened hadn't he put the full-court press on his step-dad to buy the $10 bird mask he saw online?

What if stepdad hadn't caved later in the week and ordered one?

What if he didn't have Amazon Prime? Well, it wouldn't have shown up in time.

What if he hadn't been on the block when the guy rode down the middle of Broad Street atop a car, right next to a fan who was filming it?

With a single "Yeah" (0:14) he walks forever with Tyler Oliveri, Jigar Desai and this irresponsible-ish dune buggy enthusiast (who I'd like to talk to next). 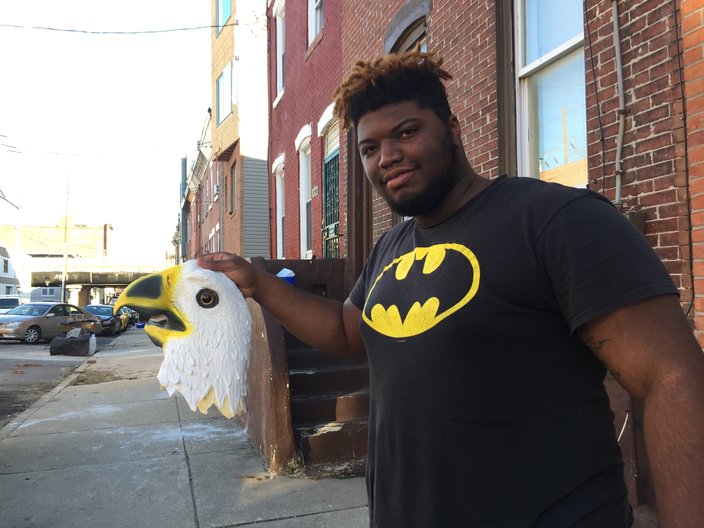 Nyseem Porter said the whole experience has left him 'dumbfounded,' but has big, secret plans should the Eagles beat the New England Patriots in the Super Bowl.

His name is Nyseem Porter.

The west-of-Broad South Philadelphian mentions he "bleeds green," but not in that respect my 4-for-4-itah way.

He played high school football for a couple years, is awaiting word about what college he'll attend next year and freaked people as a silent Hannibal Lecter on Halloween.

On Sunday, he went to a party with family and friends near 15th and Fitzwater. They watched the Eagles disembowel the Vikings.

Then, he ripped his Rick and Morty T-shirt off just like he'd told everybody he would. (He'd later find it in the house.) On went the bird mask. He booked down to Broad.

This is how he's remembering the story in the living room of his family's Federal Street rowhouse on Thursday afternoon with his mom Tara, grandmom Karen and stepfather Jamaal.

They're all still giddy about the attention the video's gotten and, of course, the Birds.

Before the video, there's a moment that didn't go viral.

"This one wasn't greased, by the way," he said about the pole he'd climbed a little while before the dude on the car got there.

Is there anything more Philly??? #FlyEaglesFly pic.twitter.com/teXHGbW4CE

"It's funny, I saw that guy on top of the car coming toward us and then this guy turned a camera toward me, so I just said, 'Yeah,'" recalled Nyseem, whose favorite Eagles player of all time is Brian Dawkins. "Then, the texts started blowing up. Breyanna said, 'I think you're going viral on Twitter.'

"That was the last I saw of the guy. He sent me a message later saying he should buy me a beer since his video blew up. We're meeting up next Friday, I think. I told him I'd get an orange juice. That's my favorite drink."

The whole family is still trying to wrap their heads around the past few days.

Surreal is the word they use to describe it.

It was more funny than surreal when his history teacher started talking about Birds Mask guy, not knowing it was his student – at least until his student told him. "that's me!"

"I'm dumbfounded. It's humbling. I don't know what to do," said Nyseem, who launched The Real Black Eagle Twitter account and just shook his head thinking about the fan art he's seen and clips on ESPN and beyond.

"Everything happened so fast," he continued. "It was so spur of the moment."

But that's all in the past. What's he going to do if the Eagles win next Sunday?

"I have something big planned," he said, "but I can't tell you what's going to happen."

Hopefully, it all falls together right, including, maybe, a couple Wing Bowl tickets?

The Real Black Eagle said he believes the Philadelphia Eagles will win by a "vengeful three points, 27-24."

With no further ado, here's more video of The Real Black Eagle on Broad, and a message for you and Tom Brady.