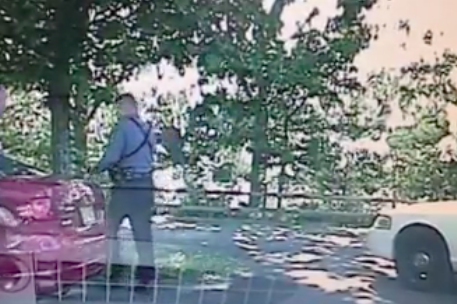 As temperatures heat up for the summer, it's a good time for an annual reminder never to leave children or pets unattended in hot cars.

Sometimes it takes an accident to underscore the point.

Earlier this week in Hammonton Township, New Jersey State Police responded to a harrowing experience for a two-year-old boy who was accidentally trapped inside his grandmother's car with the family dog.

Fortunately, the incident was brought to a positive resolution when state troopers Jacob Sherry and Steven Hodge freed the boy and the dog from the vehicle.

The boy's grandmother had called 911 in a panic after discovering she had locked her keys inside the car with her grandson and dog still inside. To get into the vehicle, Trooper Hodge had to smash the passenger side window.

State police released a video of the rescue on Thursday.

"The appreciative grandmother taught us all a very valuable lesson," state police said in a statement. "Secure your keys before placing children and animals in cars."