Chorus still calls for bipedal bear to be placed in captivity 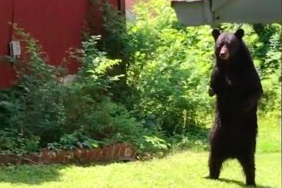 Who needs Bigfoot, sasquatches or the Jersey Devil when we've got a very photogenic Pedals the bear practically right in our backyard?

In compassionate communities like Oak Ridge and West Milford, many have implored wildlife officials to place the upright injured black bear in a sanctuary. His startling gait is the adaptive result of a partly missing front right leg and a wounded left front paw. Some have speculated that he was harmed in a car accident.

The support for Pedals is serious. One GoFundMe page collected more than $22,000 to build an enclosure for him at the Orphaned Wildlife Center in Otisville, New York. A Bloomingdale resident has gathered nearly 310,000 signatures to get Pedals that trip up north. He's got upwards of 13,000 followers on Facebook — which, yeah, it's not exactly Yogi's 584,000, but at least he's real and not an average bear.

So why is Pedals still hobbling around New Jersey in what many believe to be obvious pain and discomfort? He was last seen on June 20 by Oak Ridge resident Joey Esposito, who bravely filmed an encounter that would have sent most of us scrambling for the hills.

After three years of reported sightings, wildlife officials still won't budge on Pedals' right to freely roam the earth. Last year, the New Jersey Division of Fish and Wildlife released a statement on the bipedal wonder.

Based on video footage, interviews with residents, and the fact that the bear survived last winter’s very cold and snowy weather all indicate that the bear has been able to find adequate food sources and go through the course of its normal activities, including denning, without intervention from people. This is a much better situation than capturing the bear and making it live in captivity, as many callers have suggested.

While some people who have contacted the Division have suggested tranquilizing and relocating the bear, this poses its own risks. Tranquilizing carries the risk that the bear may not recover. Relocation may reduce the survival chances of the bear if it is placed in an area where it must compete with other bears for food.

This week, NJ Advance Media caught up with Woodlands Wildlife Refuge director Tracy Leaver, who reiterated that Pedals is most likely better off in the wild.

The best scenario might be to monitor Pedals' health in the coming years and act on the will of the people in the event that he starts to show signs of decline as a result of his anatomy. At that point, if it's in his best interest, it won't be too difficult to find him a home to live out his days.