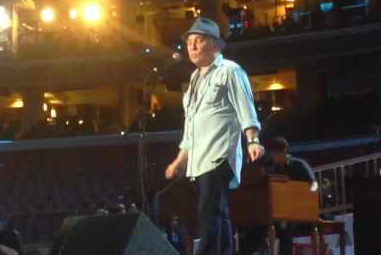 Paul Simon rehearses at the Wells Fargo Center on July 24, 2016.

American folk and world music legend Paul Simon is one of many high-profile celebrities visiting Philadelphia for the Democratic National Convention to speak, work, perform, or just plain soak up the political process.

Apart from his late-career touring, landing guest performances from 74-year-old Simon is a stretch these days. He played "Still Crazy After All These Years" for the 40th anniversary of "Saturday Night Live," but just after releasing "Stranger to Stranger" this spring, Simon suggested he's not interested in show business anymore and he's done writing music.

You might not know that based on Simon's sound check at the Wells Fargo Center this weekend, which popped up on YouTube via PennLive. Simon, who recently played The Mann Center in Philadelphia, rehearsed "Bridge Over Troubled Water" to a relatively empty room that included an admiring Rev. Jesse Jackson.

Simon later went on to perform the classic tune Monday night, making an apt choice in light of current rifts within the Democratic party leadership and between supporters of Hillary Clinton and Bernie Sanders.

In a career that has spanned decades, Simon is no stranger to political progress and upheaval, from the Civil Rights era to the Cold War and 9/11. In 1987, he co-founded the Children's Health Fund to provide healthcare to low-income youth and the homeless. He's also been vocal in his support for Hillary Clinton, donated to various progressive causes over the years and allowed Bernie Sanders to use "America" in a campaign advertisement.

During a week of high-stakes political horse-trading, Simon's presence is a welcome respite from the mud and vitriol of the 2016 election season.