WATCH: A scared-straight program (without fear) in Camden 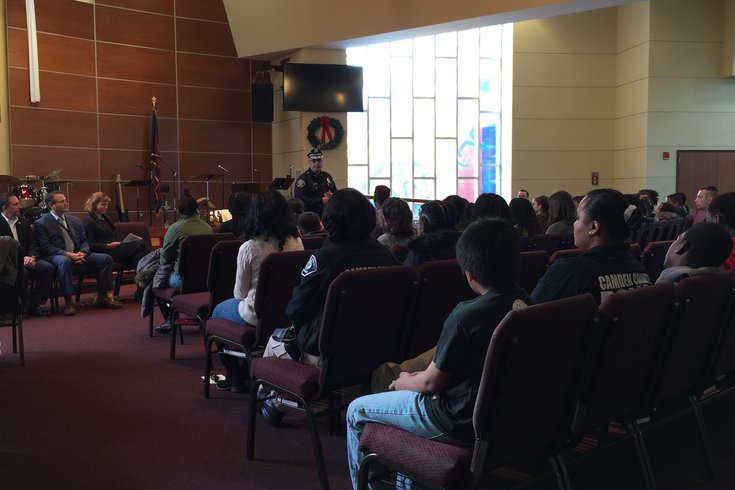 Deputy Chief Joseph Wysocki of the Camden County Police Department speaks at the Project Guardian gathering at the Salvation Army Kroc Center on Thursday, November 30, 2017. “The kids have to make the choice themselves...," he said. "They can continue on the path they’re on or they can accept help.”

The youngest invitee was a fifth grader. He’s 10 years old.

The oldest were seniors in high school. They’re on the cusp of legal adulthood.

Despite that age disparity, all 26 youths had one thing in common as they sat inside a chapel at the Salvation Army Kroc Center in Camden, N.J. on Thursday morning.

A police detective had shown up at their front door to speak with their parent or guardian to offer an invitation.

The conversation was technically not related to a criminal investigation. Rather, it was a chat about how the youth could benefit from the two-year-old Project Guardian street-violence reduction program.

According to Deputy Chief Joseph Wysocki, the idea for the program – which takes youths out of Camden schools for a few hours twice a year – arose when former Philadelphia Police Commissioner Charles Ramsey invited officers to observe a prisoner-reentry program on the other side of the Delaware.

The fact that nearly one-third of violent crimes were being committed by juveniles led Wysocki, others in the police department and social-service agencies in Camden to take the idea and tailor it for youths.

“It made perfect sense,” he said Thursday, before the “Lifting Up Camden’s Youth” program got underway.

To be sure, it’s not an easy sell. Camden County Police Lt. Janell Simpson estimated that of the 100 children identified as prospects for program – complete with a knock-on-the-door invite – fewer than 20 attend.

She said the youths have had some sort of contact with law enforcement in the past. If they sign on – like 26 did for Thursday – they get a bus ride to and from school.

“It’s disappointing,” she said of the youths who choose not to accept the early intervention offer. “When they’re here, they can let their guard down. They can be kids, smiling, laughing, working on projects like making gift bags for Camden’s homeless population like we’re doing today.”

Wysocki said anywhere from 100 to 150 youths have been invited to these gatherings in the past. He called the front-door visit “a sales pitch,” and as with most sales pitches, there are varying degrees of success.

“One-third of them shut the door right in our faces. They don’t want nothing to do with police. We can’t help those kids,” he said. “Another third are in ‘not my kid’ denial. The other third say sure, they’ll come.”

That doesn’t mean that entire third actually shows up, though. 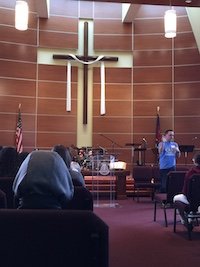 “We’ve had kids running out the back door of the school to avoid us when they show up that day,” Wysocki said. “The first time, six or seven came after 35 said yes. That was disappointing, but I’ve come to see even helping two or three youths as a huge success.

“The kids have to make the choice themselves. We’re not forcing them to come here. They can continue on the path they’re on or they can accept help.”

When they do show up, various social service agencies are there to assess their needs while the youths are distracted with games and projects.

As was the case Thursday, they also hear from law enforcement officials about why their participation in the program could land them on a path to a safer, healthier, more prosperous type of future.

Joining law enforcement officials on hand – representatives from the FBI and DEA were there as Assistant U.S. Attorney Diana Carrig spoke – was Jason Lasure, who escaped a hard-scrabble youth in Camden to serve as a member of the N.J. Juvenile Justice and Delinquency Prevention Commission.

“We’re breaking down the barriers,” Lasure said, noting that, early on, there was social media chatter among Camden’s youths trying to dissuade peers from attending. “They’ve realized we want to help them. This isn’t a ruse. We’re here to help.”

Simpson has seen that dynamic firsthand. Though she’s not free to name him, there’s one program participant who her fellow officers have taken to calling Simpson’s “son.” He’s 16 years old and already has robbery and aggravated assault marks on his criminal record.

When he got arrested on that latter charge, he broke down in tears when he saw Simpson at the police station.

“He could’ve been crying because he got locked up, but I think it was because he thought he disappointed me,” she said. “He’s a good kid, even though when he’s out on the street, he acts completely different. But, he hasn’t (been arrested) since then.”

And that’s exactly what they hope to accomplish with all the youths.