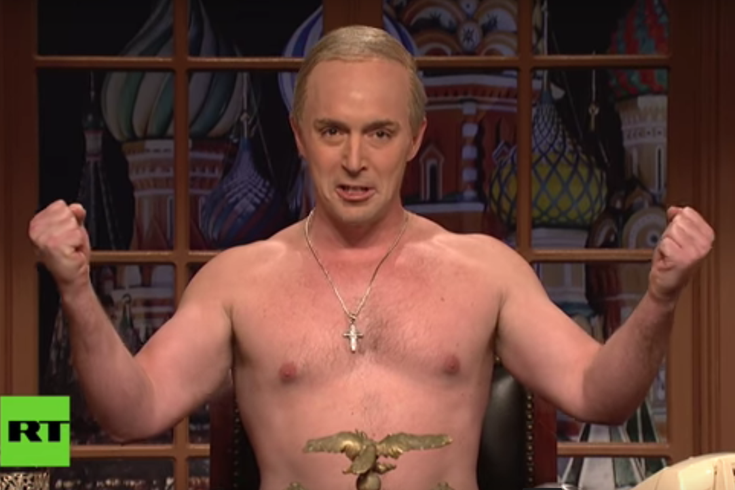 While Donald Trump was wrapping up his first full day as president, television viewers turned to "Saturday Night Live" to see how they would address Friday's Inauguration.

Alec Baldwin's portrayal of the new commander-in-chief was — unfortunately — absent from the show. Instead, Beck Bennett appeared as shirtless Russia President Vladimir Putin to assure the public that they had nothing to worry about.

Bennett's Putin immediately took credit for Trump's electoral victory, "Yesterday, we all made Donald Trump the 45th President of the United States. Horaay! We did it!"

Acknowledging that some people are scared, Bennett's Putin alleviated their fears by promising nothing bad would happen. "Relax. I got this. Putin's going to make everything OK. I promise that we will take care of America. It's the most expensive thing we've ever bought," he said before shifting gears to Trump's Inauguration.

"I'm glad to see so many people showed up to your Inauguration," Bennett's Putin condescendingly said. "Oh wait, that's the women's march," as he used photos of the events to really drive the dig at Trump home.

"Your whole Inauguration was kind of heavy on the God stuff. I never heard you say "God" that much and I have tapes of you having sex," alluding to the unsubstantiated claims from earlier this month that Russia has damaging information on America's new leader.

Watch the segment below:

Actor and comedian Aziz Ansari served as the guest host this week. During his opening monologue, Ansari shared his opinion on Trump's victory, Trump's supporters, Islamophobia and race relations.