Philadelphia police say the attack occurred as the victim walked on the 2000 block of Cherry Street on Nov. 15 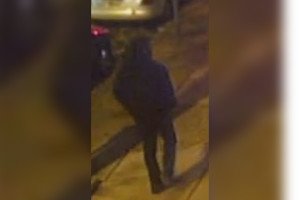 Philadelphia Police Department investigators are looking for this man, who they say, stabbed a Moore College of Art and Design student during a robbery attempt on Nov. 15.

Philadelphia police are seeking help from the public to identify a man who stabbed a student at Moore College of Art and Design in a robbery attempt on Nov. 15.

According to police, the assault occurred around 11:35 p.m., when the 19-year-old female student was walking on the 2000 block of Cherry Street on her way home from the college. A black male approached her from behind and grabbed her before he began punching her in her torso in an attempt to take her handbag, police said.

In surveillance video from that night, the suspect can be seen walking on the street, then turning and following the woman before the attempted robbery. Watch it here:

After a failed attempt at taking the suspect's handbag, the suspect fled and was last seen headed toward Logan Square from Race Street, police said.

The woman suffered stab wounds to her torso and was taken to Hahnemann Hospital, where she was treated for her injuries, law enforcement officials said.

Police believe the suspect is about 25 years old, 6 feet tall and about 180 pounds. According to police, the man has a thin build and at the time of the attempted robbery was wearing a black hooded sweatshirt, black knit hat, dark gray jeans, and was carrying a large cell phone.

Anyone with information about this incident or this suspect should call Philadelphia police at 215-686-8477 or text a tip to 773847.